From Kagi to Mission Ridge 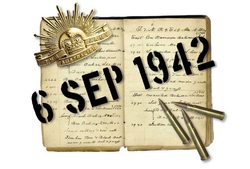 By the time the withdrawal reached the Kagi area, the three AIF battalions of the 21st Brigade were able to fight together for the first time. After meeting up at Kagi the 2/14th and 2/16th took up defensive positions on the high ground at Brigade Hill, the fresh 2/27th whom had arrived from Port Moresby were placed in the forward position on Mission Ridge.

After dark on 6th of September General Horii's pursuing force appeared, slowly and carefully coming down the steep slope opposite the Australian position, their way lit by "lanterns" made of pieces of smoldering Australian rubber coated signal wire.

The members of the 21st Brigade were uneasy and worried by the amount of “lanterns” being used by the Japanese who were moving down the valley from the north. Brigadier Potts subsequently requested “everything you have got from the air on Efogi” by signal to Port Moresby. In response to this effective air support in the form of eight B-26 Marauder medium bombers strafed and bombed the Japanese in the Efogi area. The Japanese sustained significant casualties and the defending Australians a measurable morale boost.

The Australian 2/27th Battalion held a position on the spur line of Mission Ridge. Japanese scouts conducted significant reconnaissance in an attempt to find access to the main track; however in most directions the terrain was identified as far to steep for a possible flanking move.

It was determined that the plan of attack would be to frontally assault the Australians on Mission Ridge with one battalion whilst another moved around the flank in an attempt to block the track behind the forces on Brigade Hill.

On the 7th of September the Japanese attack commenced. The 3rd/144th Battalion came at the 2/27th positions on Mission Ridge with the artillery support of six mountain guns and numerous mortars. Vicious close quarter fighting continued until early the following morning; however, the Japanese were unable to take any ground from the Australians.

Almost half the Australian soldiers lost on Mission Ridge were due to bombardment from the Japanese mountain guns.

As night fell on 7th of September, another Japanese battalion (2nd /144th), commenced an arduous flanking march through the jungle in an attempt to get into the Australian rear areas. They followed a creek line around the western side of the Mission Ridge spur with the hope to be able to advance up the steep western flank of the Australian position on Brigade Hill.

At Isurava and Eora a trek through the jungle of this kind had often resulted in the Japanese becoming lost. Here at Efogi the Japanese obtained local Papuan guides and their navigation was true. 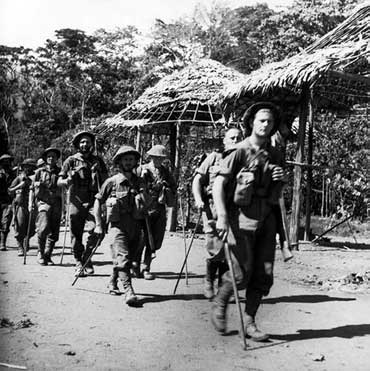 View from Mission Ridge to Kagi
Kokoda Expeditions with No Roads