Kokoda is a great challenge that tests not only your endurance, but your ability to succeed under the toughest of circumstances.  As we go through life, finish school, start a career, raise a family, run a business, or manage a team, we are continually faced with challenges that require effort for us to gain success.  But how often do we take a risk and really push our limits further than we need to? Should we take the safe route and accept the path that follows, or push ourselves outside our comfort zone to see how far that success can go?  At best, Kokoda is a hard slog, with 96 km of difficult terrain, extremes of weather, and none of the comforts of home that we are accustomed to. But there’s no better place to test your limits and your ability to succeed than tackling the track!

Our group took on the challenge of a 5 ½ day fast Kokoda discovering more about themselves and their ability to face any challenge and succeed.  Husband Rick, sister Penny, bridesmaid Lys and friend John, Jmara and Sam from Werribee Football Club, AFL legend and coach Daryn, and his employee Nick, and Stuart who joined us knowing no-one, but like the rest of the group, was keen to take on the challenge ahead of him.

Despite the challenges, there’s always something magical about starting a Kokoda Trek.  After months of preparation, we were on our way through the low lying villages and into the unknown.  The niggling fears grew as we reached the first hill where everyone started to question their ability to make the distance.  With heart rates elevated, failing light, and a jungle down poor, we settled into camp at Deniki for our first night on the track watching the sound and light show roll through the Yodda Valley.  There’s no better feeling than sharing the beauty of my office with family and friends.

After an early start, we headed off from Deniki to reach our destination of Eora Creek.  The Cresswell ATM was officially opened at Isurava Village, where Daryn started to hand out money to the delight of the children in the area.  At the battle site, we held a special service where we honoured the soldiers who fought in the Kokoda Campaign, before moving on to lunch at Cons Rock.  It was then a long afternoon walk through Alola to reach our campsite at Eora Creek. Nick and Cress shared their workplace banter that entertained us all.  A swim in the river helped to relieve those aching legs, while the chance for a fire at night gave a great setting to hear of the customs and traditions from our local PNG guide team. 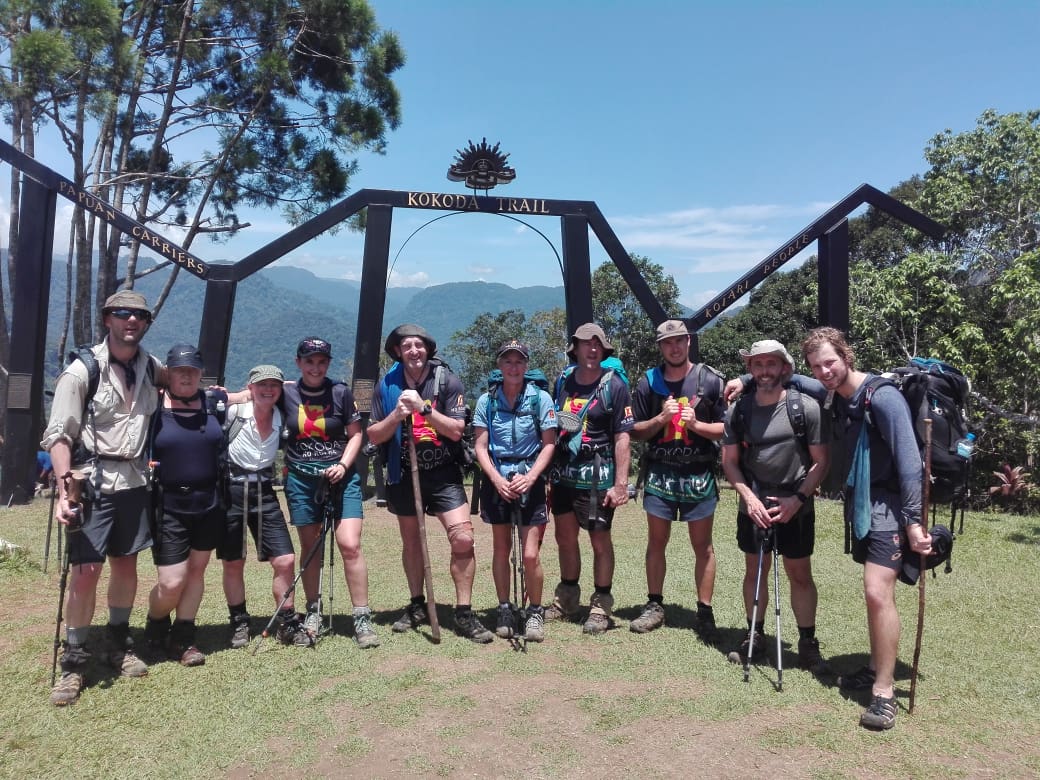 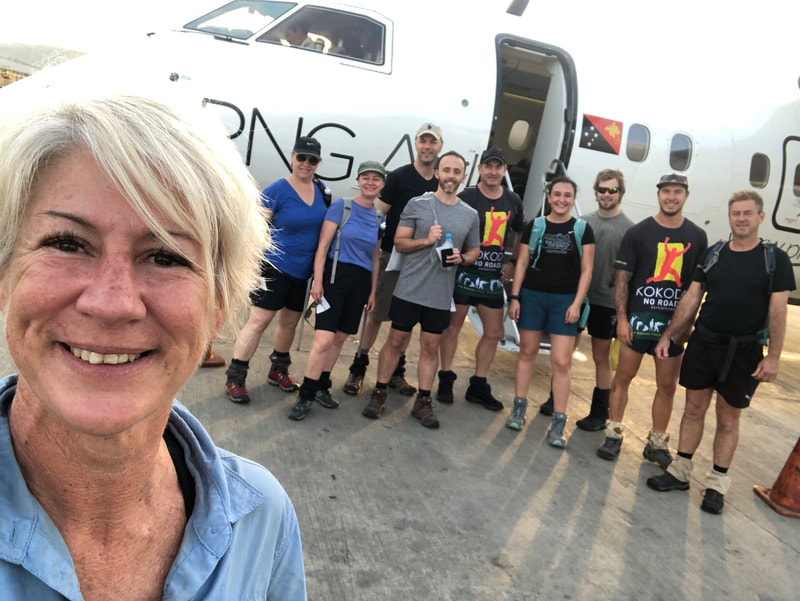 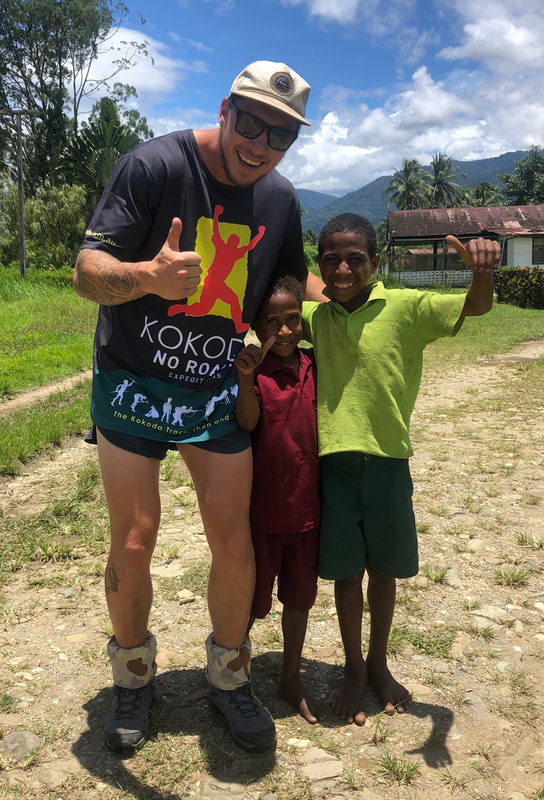 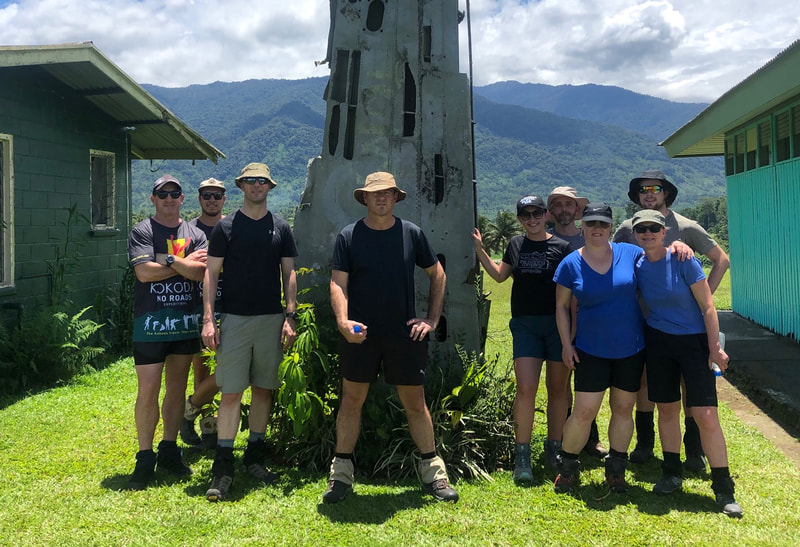 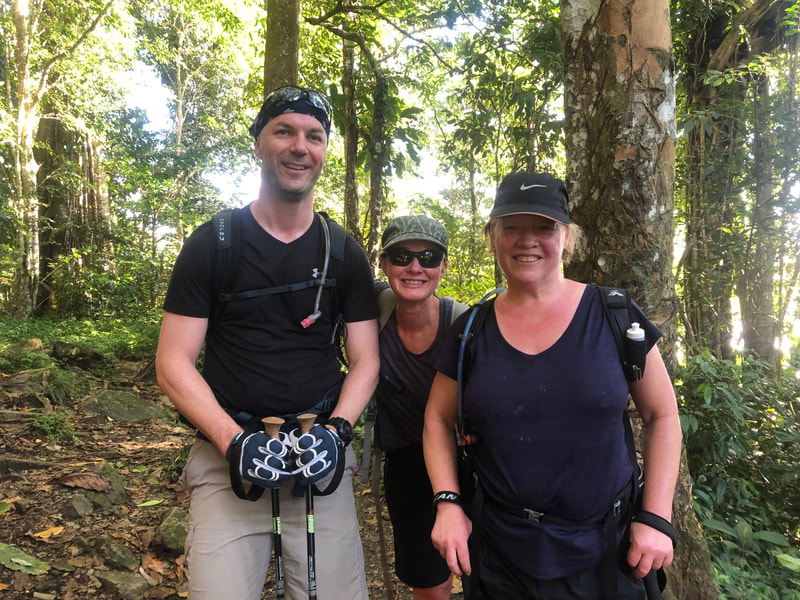 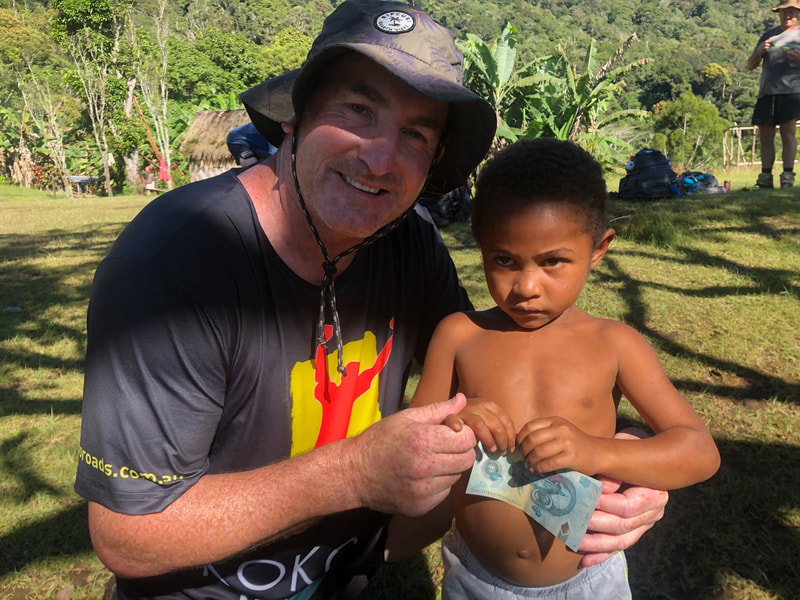 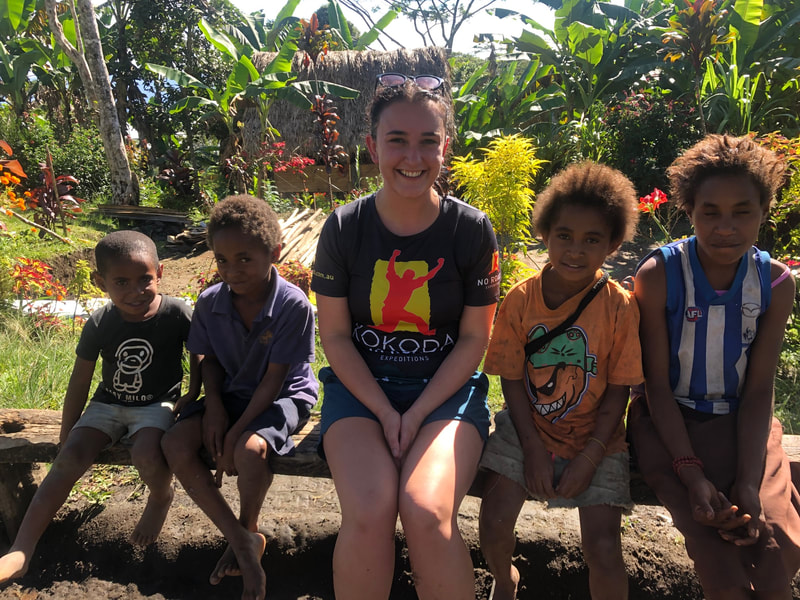 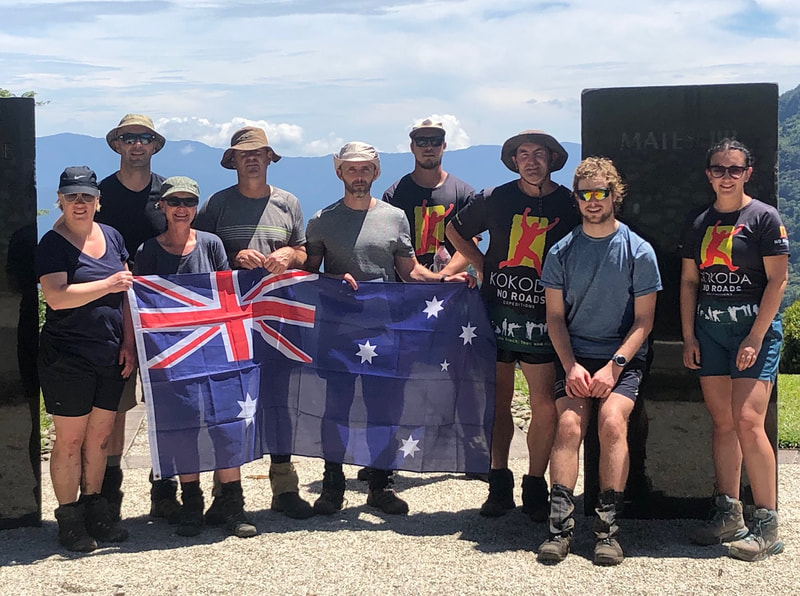 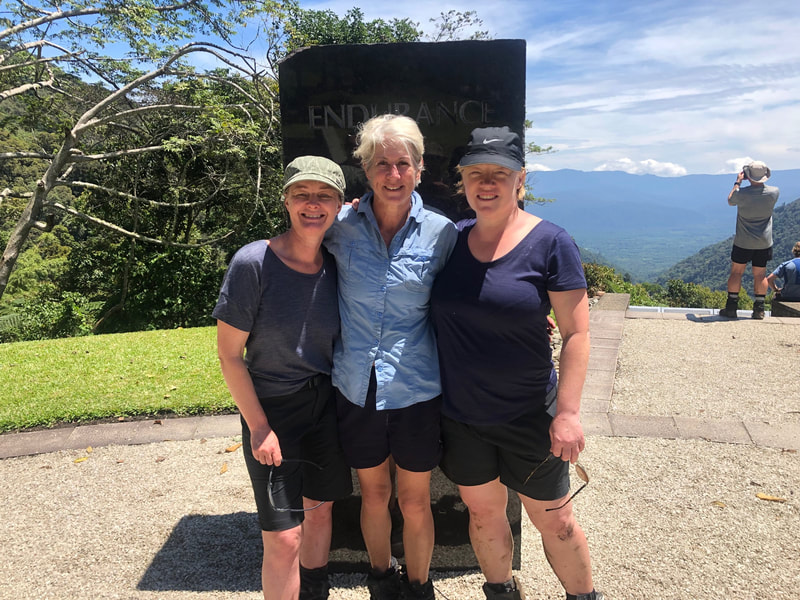 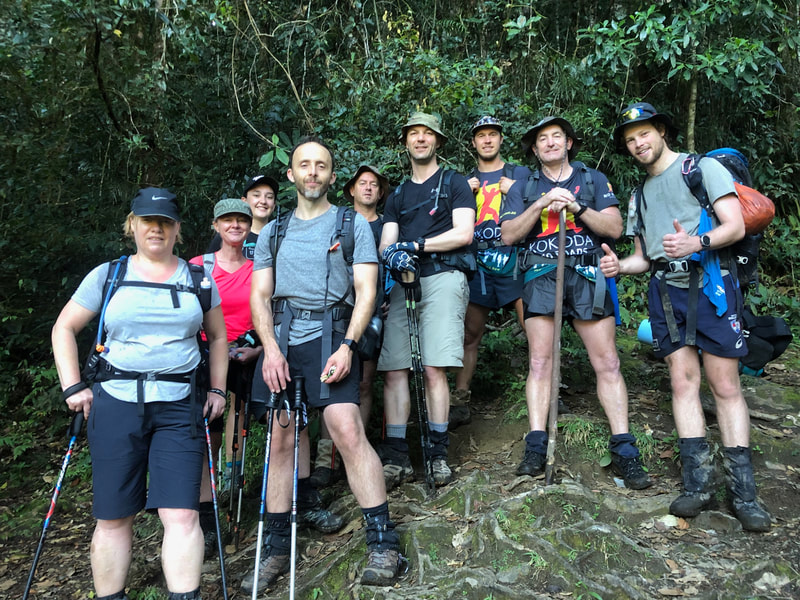 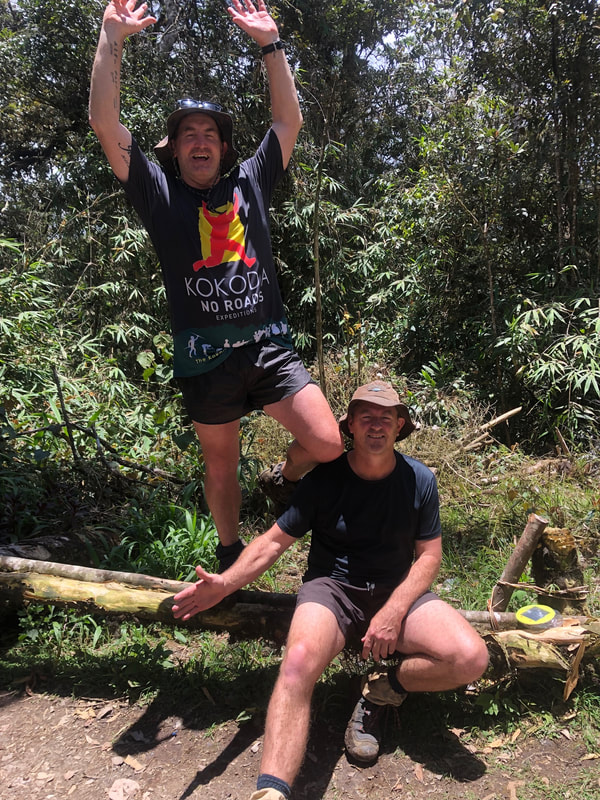 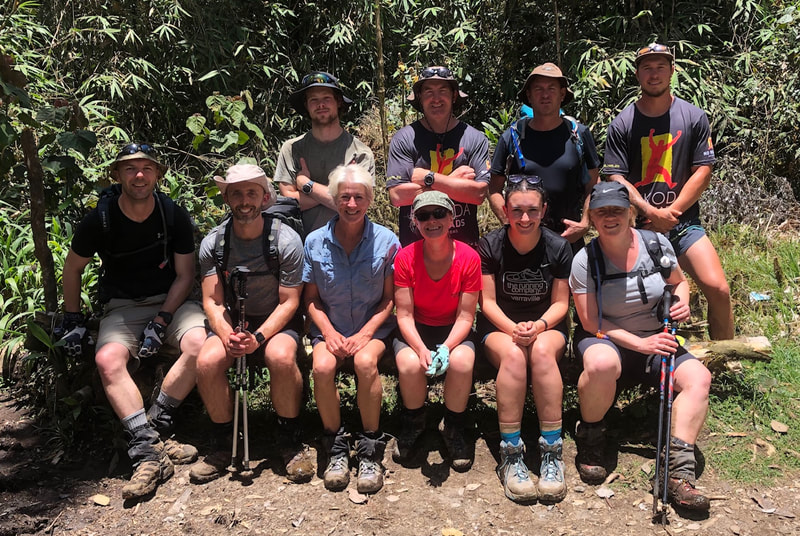 The fun really began on our third day, as the challenge became greater.  Walking from Eora Creek to Kagi is a big day, but the humorous moments that came made the going easier.  Finding your sense of humor when facing adversity is a healthy way to build resilience, no matter how bad your situation.  Sams milestone of falling 6 times in one day raised many laughs, even more so when he decided that walking backwards down the slippery sections was a safer option than falling again and again.  As we ate lunch at 1900, the heavens opened up much to our delight as Cres brought out the see-through poncho - even the local guides could not be persuaded to wear it. As we reached the village of Kagi, we were welcomed by the children singing, with a larger group returning that night for more singing and a little hokey-pokey.  Sure the Sydney club song is still ringing in their ears.

With another massive day ahead of us to reach Agulogo, the weary set off earlier than the rest to help keep the group together.  The sure footed Lys managed to slip on the flat ground leaving camp, which set the scene for the thrills and spills that were to follow.  John, Penny, Lys and Jmara handed out some of the student packs they had purchased to assist the students in the village, with the remaining 47 packs set to arrive in the next few weeks when the plane that crashed at Efogi is operating again.  The generosity of many saw 53 student packs delivered to PNG to assist the children at the local schools which will be a great start to them in 2020.

At Efogi we visited the museum, caught up with friends, and received a blessing from Pastor Samual, before making our way to Brigade Hill for lunch and a service to hear more of the challenges faced by our troops during the Kokoda campaign.  The strong were getting weary as we pressed on to Menari. The heat affected each of us as we tackled the 2 hours of downhill walking that even got the better of the well trained John, who still continued to encourage Penny and Lys throughout the journey.  After a break in Menari, we tackled the last section of the day. A brief distraction saw Rick fall from a steep section of the track, his fall broken by a tree that stopped him going all the way to the bottom. Relief came for all as we finally reached camp and enjoyed the comfort of a swim in the river and a stretch on the seats, before an early night to bed.  Penny received some encouraging letters from home that helped give her the strength to tackle the remaining journey.

The team began to fall on day four, as the heat took its toll, walking from Agulogo to Ioribaiwa.  A challenge at best to complete the day, covering Maguli and Ioribaiwa Ridge made even harder by the hot conditions.  Despite their strength and courage, Jmara, Lys, Penny and Nick all suffered from the extreme heat, which made a slow afternoon walk to get them all through to camp for a well earned rest and an opportunity to leave their mark on Kokoda.  Sam discovered that you can’t eat popcorn through a mozzie net which brought more laughter. Stuart was the last man standing again, sharing another night of welcome chats and helping to solve the problems of the world with me. 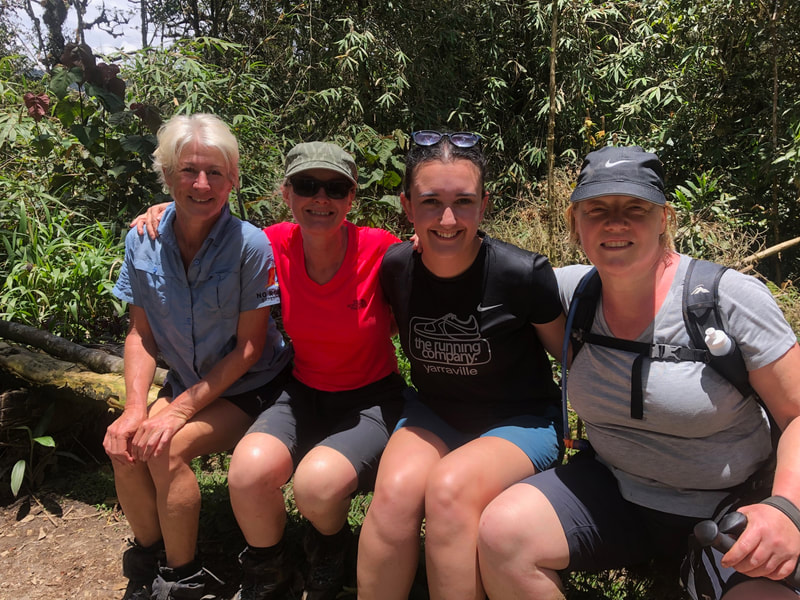 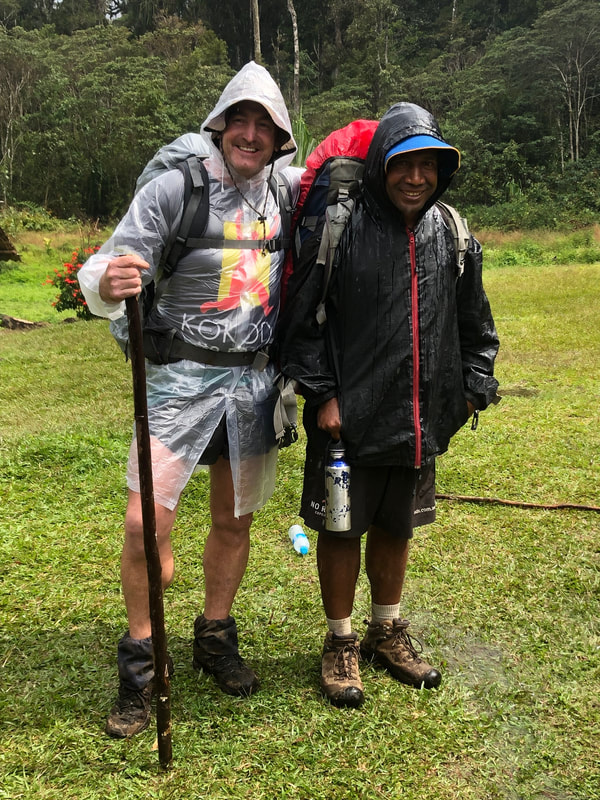 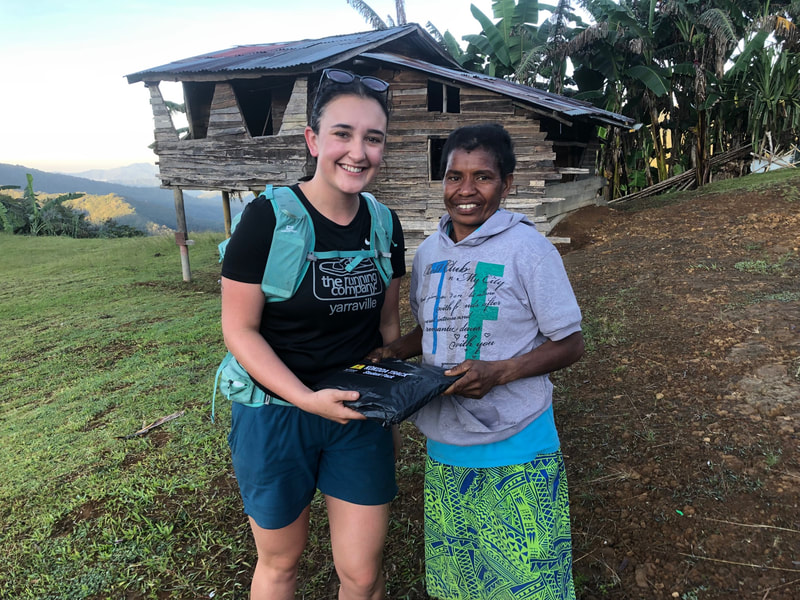 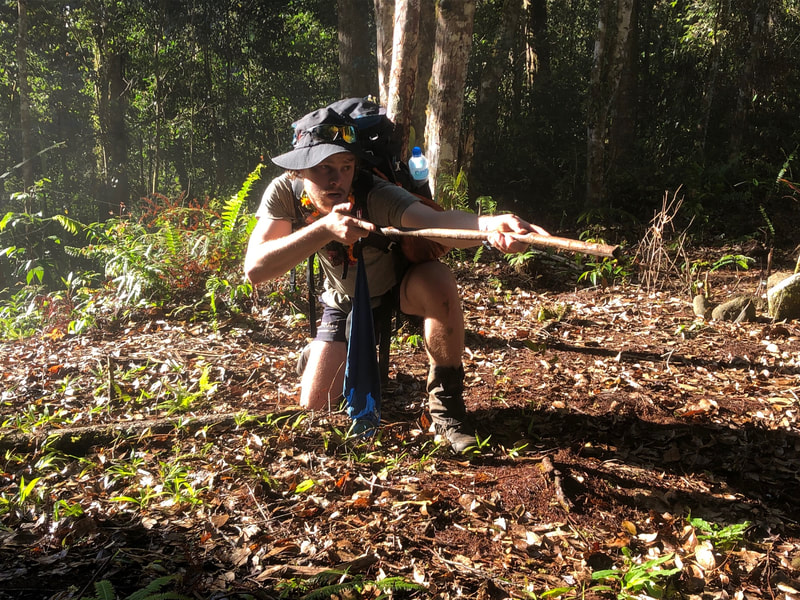 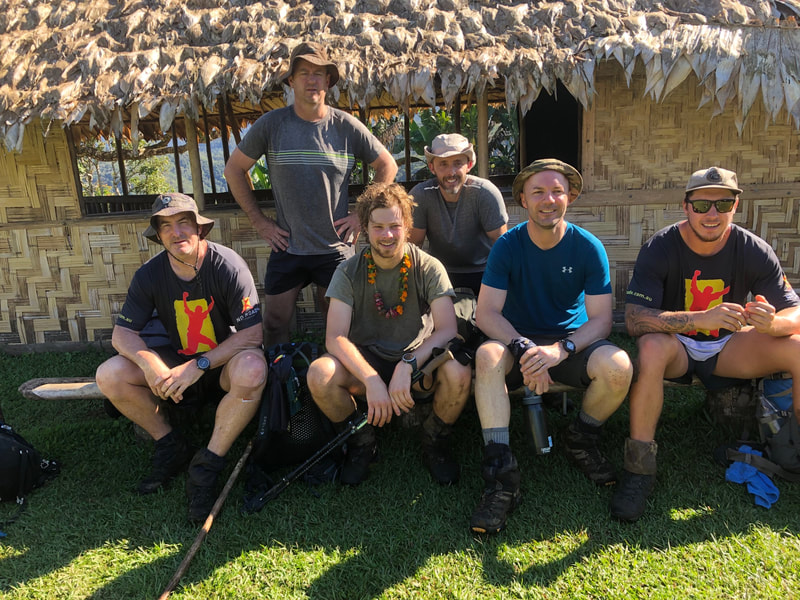 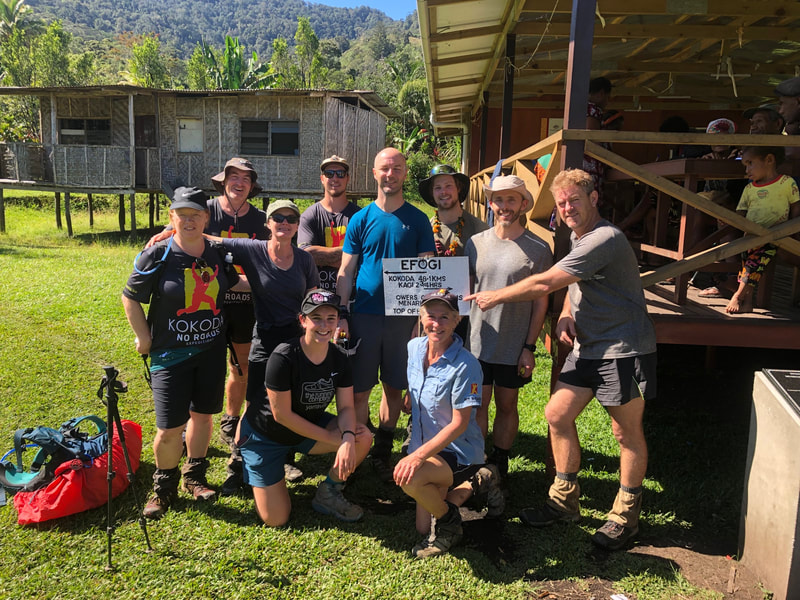 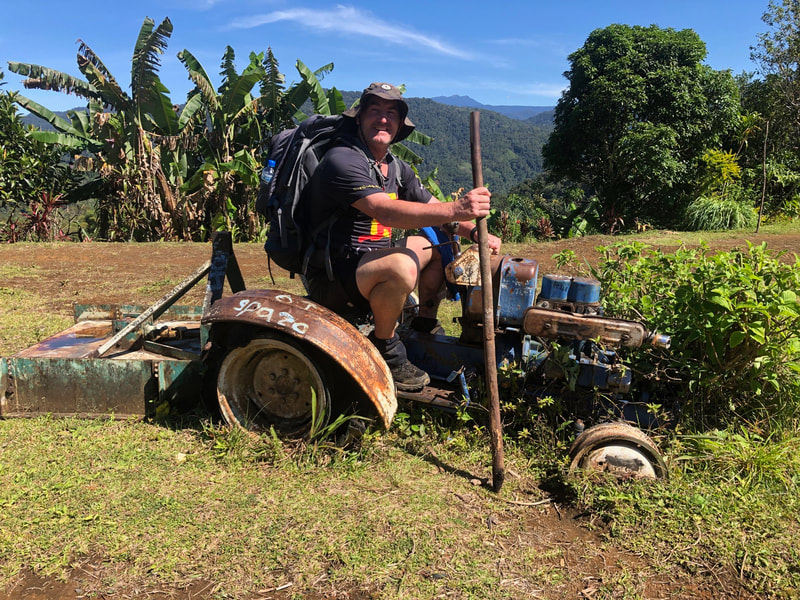 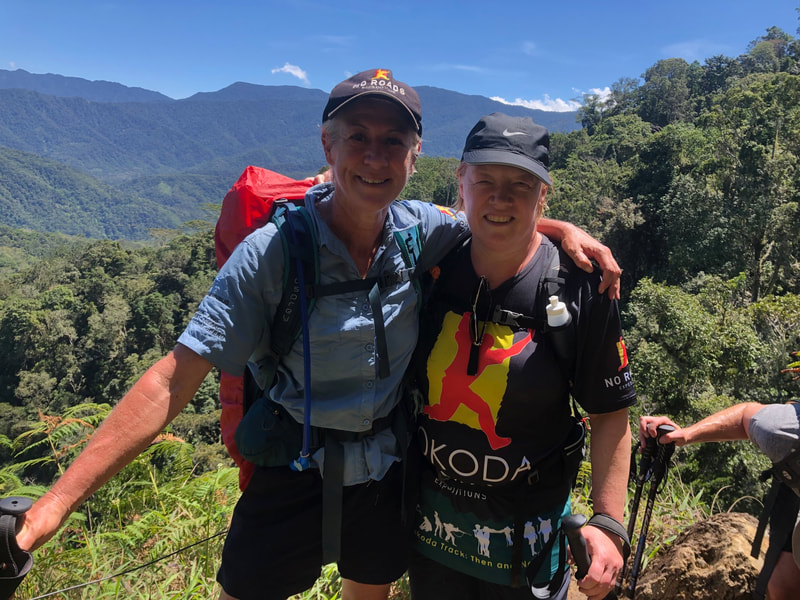 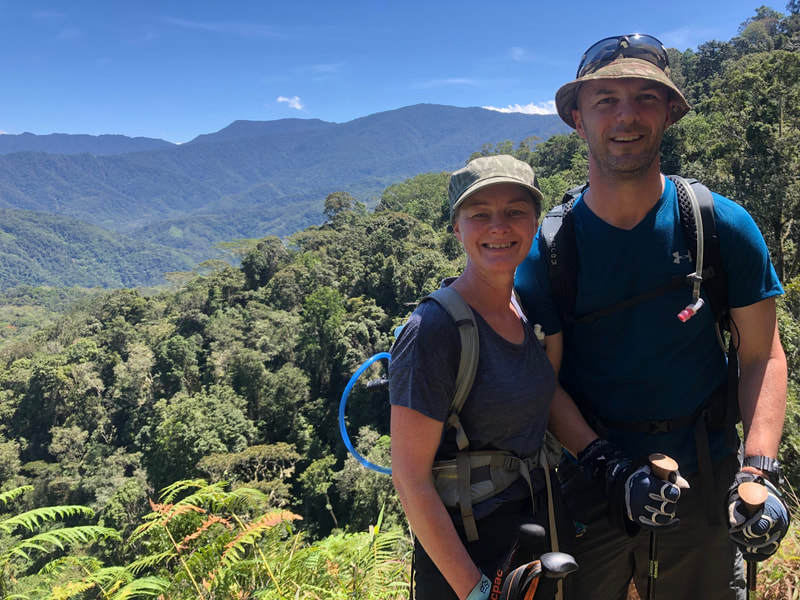 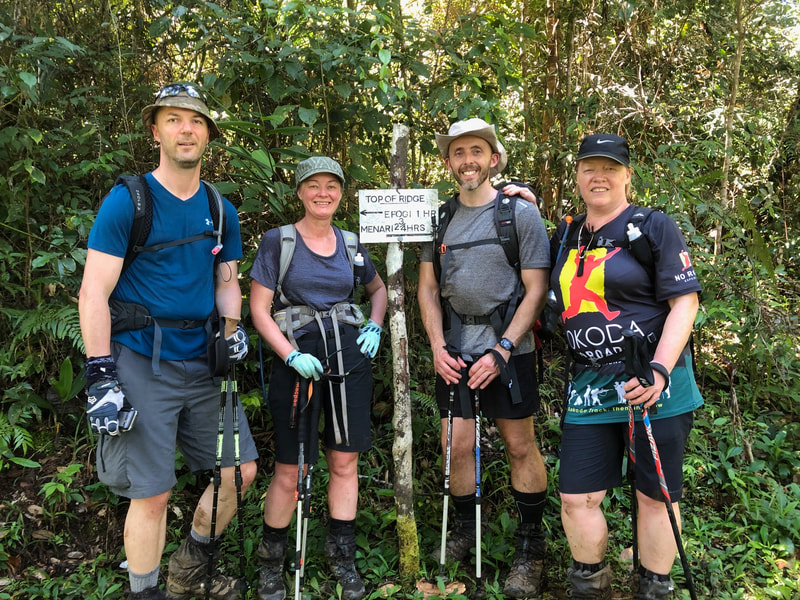 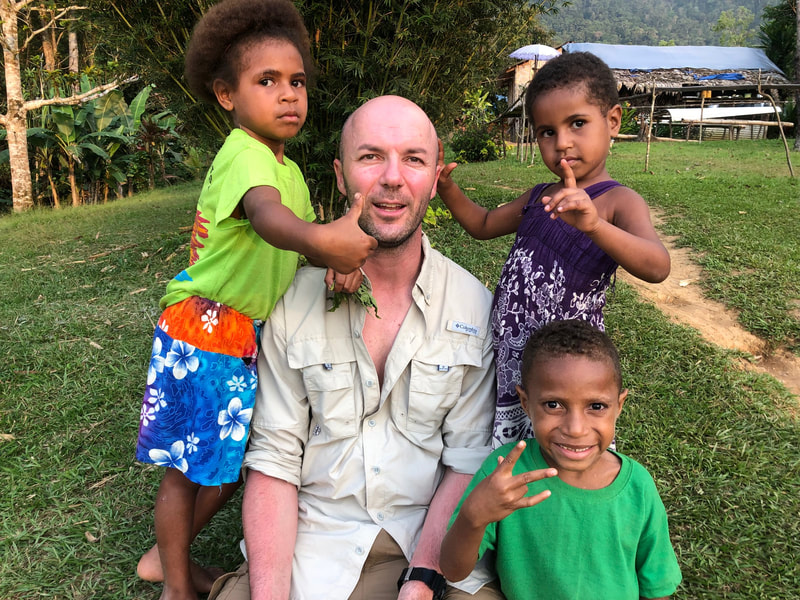 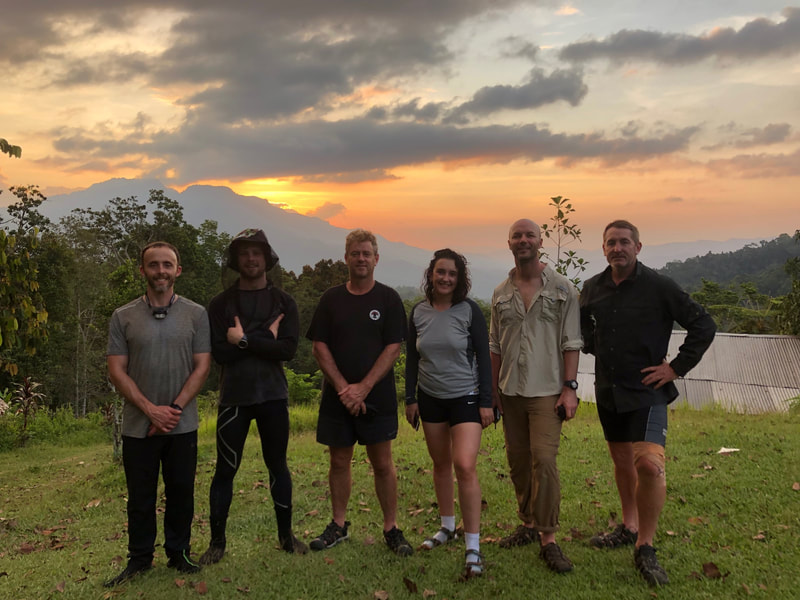 It was with trepidation as we set off on the final walk, hoping the ill would make it to the end.  Teamwork took a different path as everyone encouraged each other to walk the final distance to Owers Corner.  A slingshot challenge with a 50 kina bonus from the Cresswell ATM helped to entertain us as we waited to regroup on Imita.  The last walk of the trip saw us reach Owers Corner together and celebrate the success of the challenge we’d overcome. An amazing effort by all to complete the track in a hot, fast Kokoda crossing.

Everyone possesses the qualities to succeed and overcome difficult circumstances, but seldom do we take the risk to challenge ourselves beyond the comforts of daily life.  But what happens when we do? What we learn far outweighs any achievements we have reached in the past and strengthens us for what we will face in the future. Well done to all those who accepted the challenge.  You smashed it!

There are many reasons that draw people to take on the challenge of completing the Kokoda Track.  For some, it’s the physical challenge of testing your limits. For others, a pilgrimage to honour those who fought to give us the freedom we know today.   Then, there are those who want to discover the mystery of Kokoda that keeps us going back again and again. Regardless of the reason, every fun filled adventure is just like a toy story that takes you on an adventure to infinity and beyond. 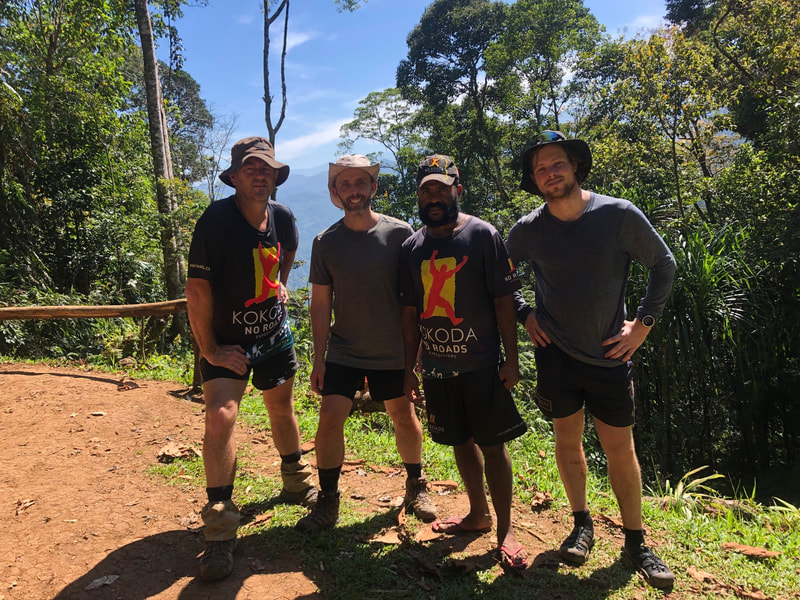 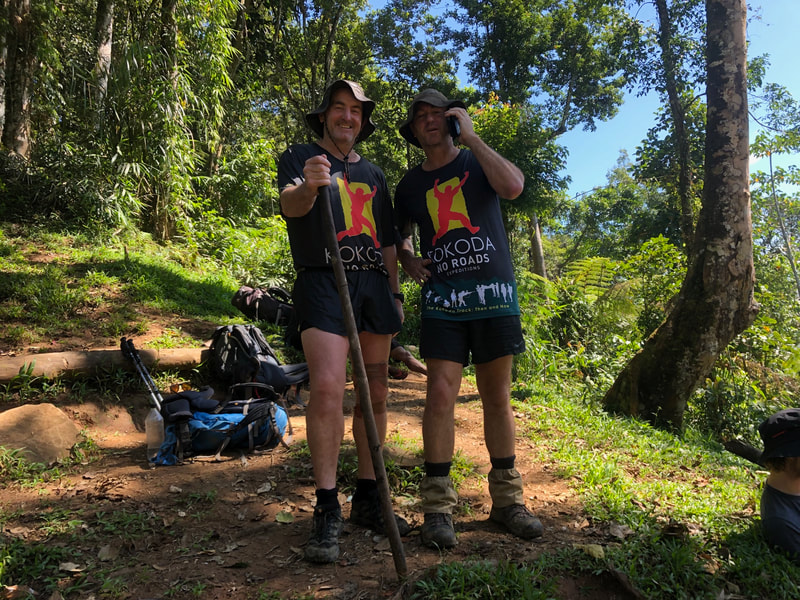 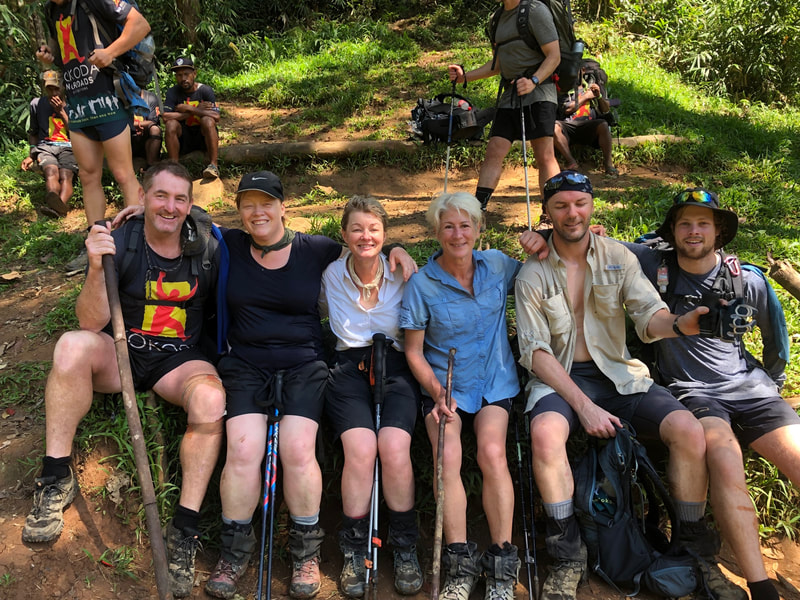 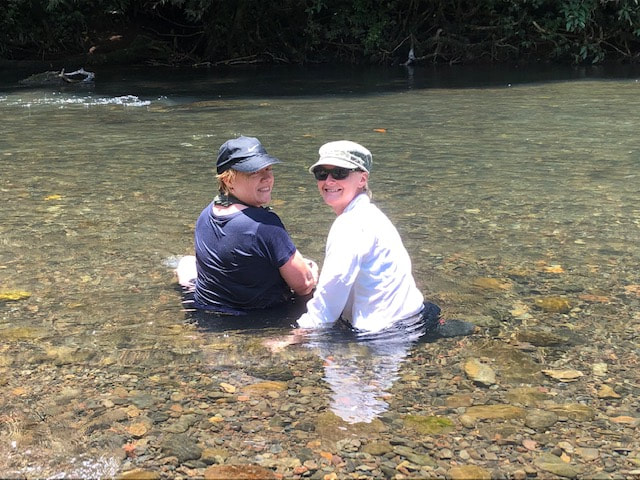