There’s no disputing that the Kokoda Track is a challenge for anyone that attempts to walk it.  Under the best of conditions, regardless of the preparations, Kokoda will push your limits as you step outside your comfort zone into this remote world.  Brothers Nick & Casey, Gavin and Owen with their mate Andrew, and the solo travelers Pamela, Matt and Jock stood up to the challenge with a few extra curve balls thrown in to test their limits beyond any normal Kokoda crossing.  Rain, mud, wet gear, blisters, a broken toe and crossing the track in a fast 6 days, all the ingredients to create an adventure way beyond what anyone expected.

We set off early on the first day, flying to Popondetta, and boarding the PMV that took us to Kokoda, giving us our first taste of remote PNG life, and time to get to know each other.   Arriving in Kokoda we met our PNG Guide team, an important key in getting us safely across the track. Everyone had a personal Guide to assist them, and we soon realised that “we’d be f@#$%ed without them”. The journey commenced following a demonstration of a new tribal dance by Tobias, that brought laughs to set the scene for the adventure.

We had a huge task ahead to reach Isurava Village, but with fading light and rain closing in, we bunked down for our first night at Deniki.  The group traveled well and were all at a similar fitness level, so there was no concerns that we would make up for lost time on the days ahead.  With the excitement of finally starting the trek and thoughts of what lay ahead, exhaustion crept in. We headed off to bed as the rain started to fall… and in true Kokoda fashion, continued to come down!  Deflating mattresses, a broken zip, leaking tents and wet gear was not the best way to spend your first night in the Owen Stanley.

Bleary eyed, wet, but still excited, we commenced day two heading to Isurava Battlefield for a service, learning stories of the unsung heroes of the Kokoda Campaign.  There are four words carved into the pillars at Isurava, synonymous with the ANZAC spirit.  Courage, Endurance, Mateship and Sacrifice. Four words that became etched in our minds, as we learnt about the battles that occurred, and experiencing first hand the conditions that our soldiers endured.   After the heavy rain, the track was sodden, with every step brought thoughts of the conditions the soldiers would have endured.  We thought of this frequently as we pressed on to Eora Creek, covering 18 km for the day and managed a quick swim before the rain started to fall again.

Humour and mateship is the Australian way of dealing with adversity, and allows us to get through the most difficult challenges we face.  Just as our diggers did during the Kokoda Campaign, humour and mateship became our survival strategy for the long trekking days that followed.   Laughter really is the best medicine and there was no shortage of hilarious moments shared between us all. Most were generated from Jock, who shared his experiences of farming, spas and came up with terms that Alf Stewart could learn from.  While we didn’t hear struth, or stone the crows, we are all still wondering how you could push a peanut to Perth, which kept us all laughing each day. 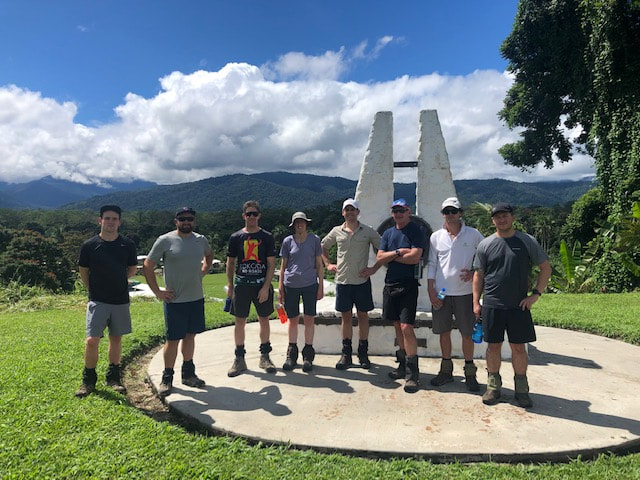 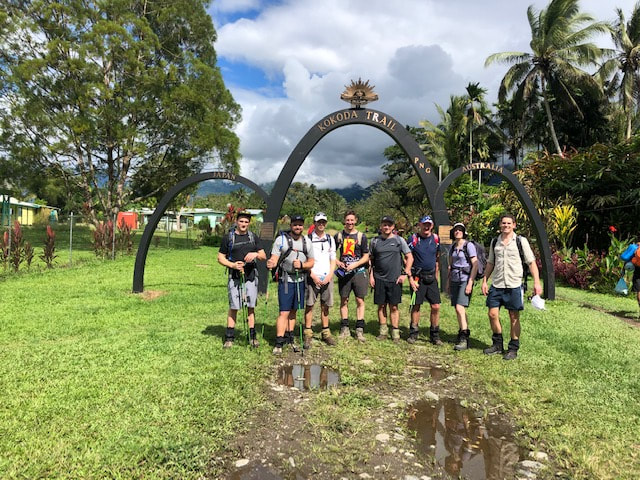 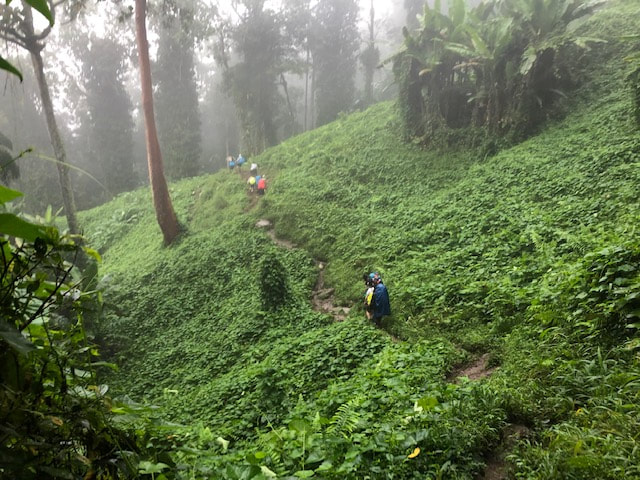 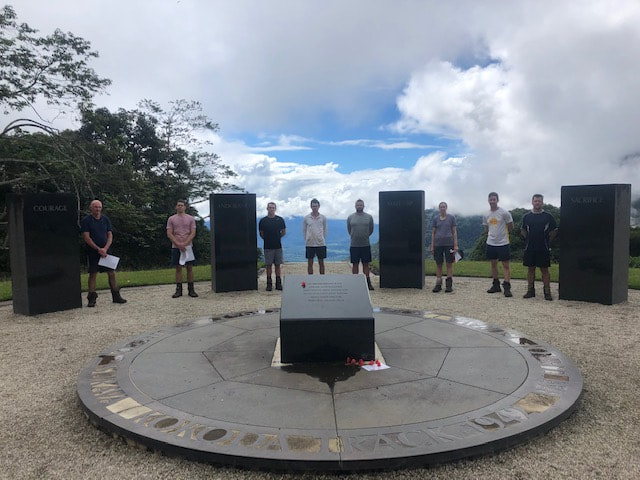 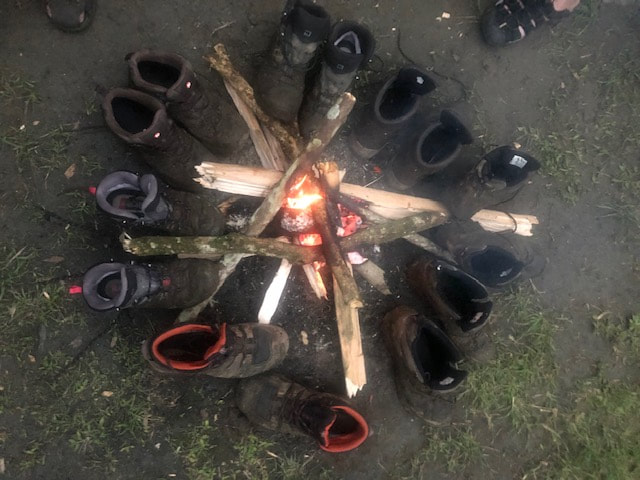 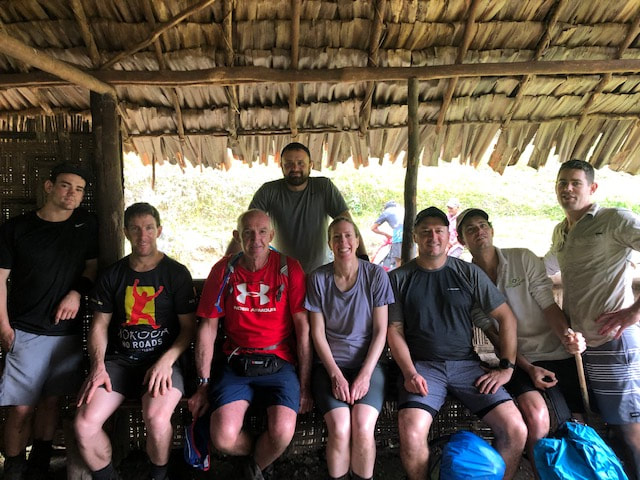 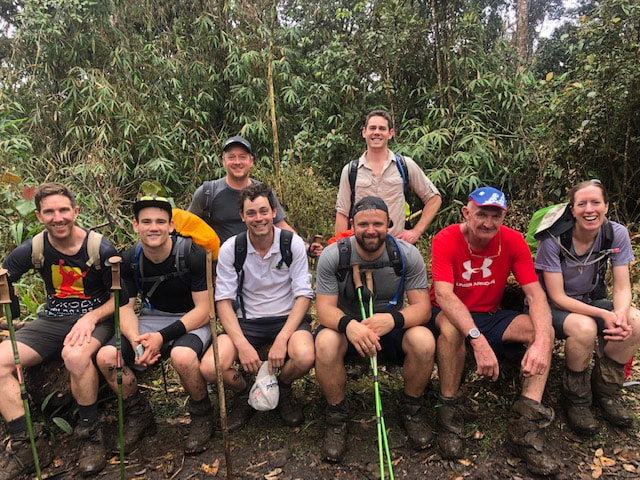 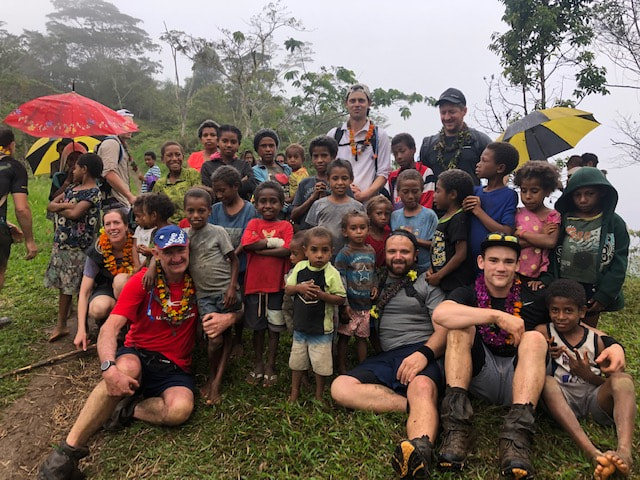 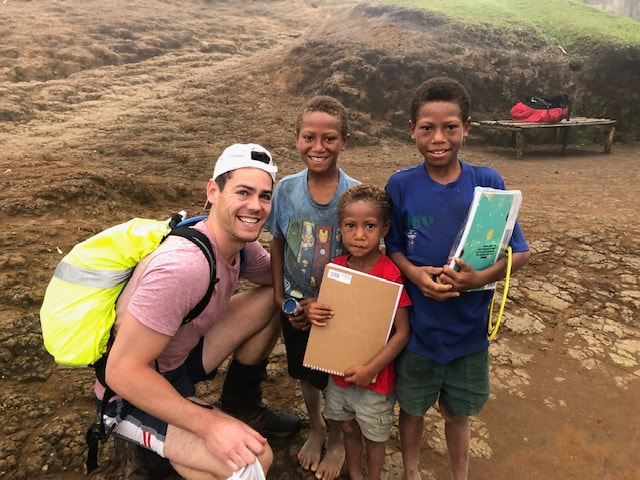 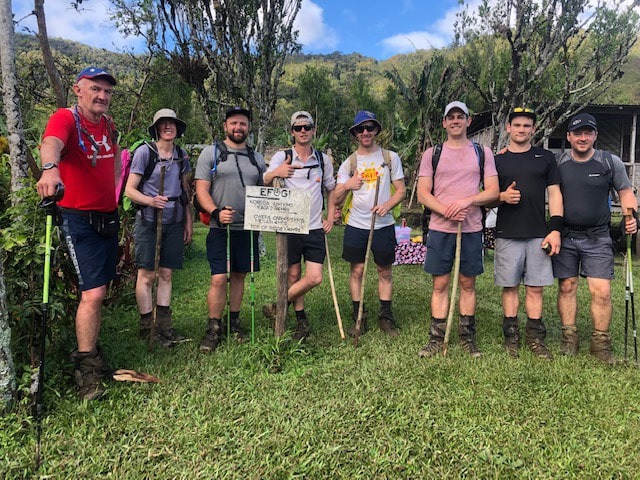 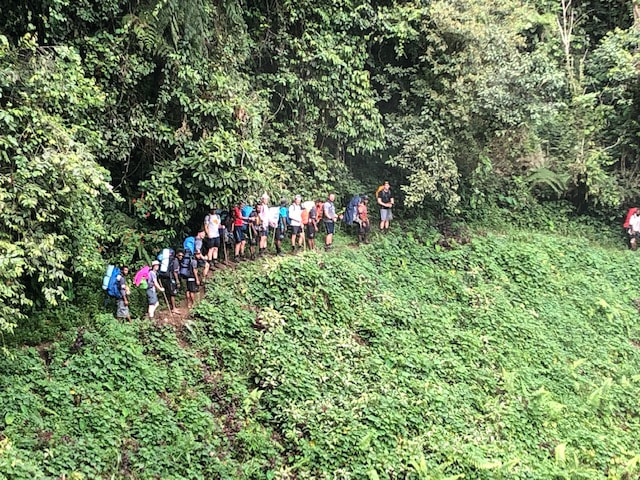 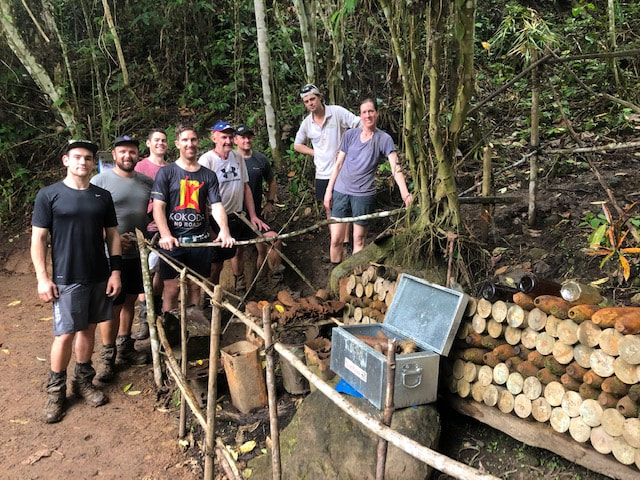 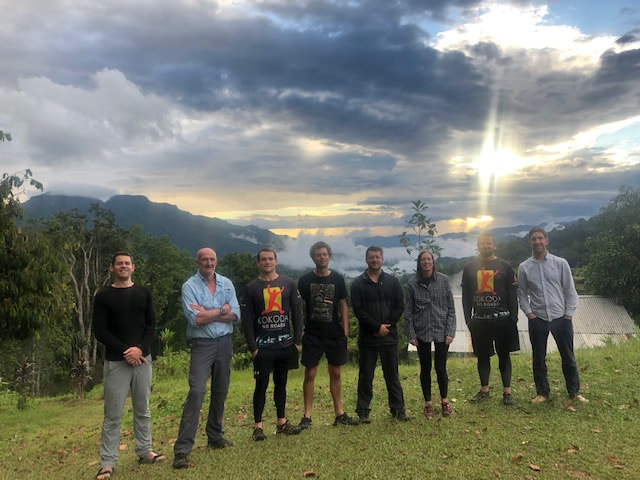 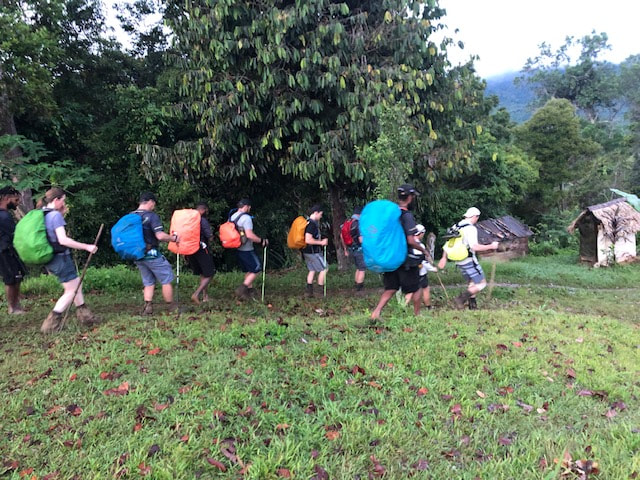 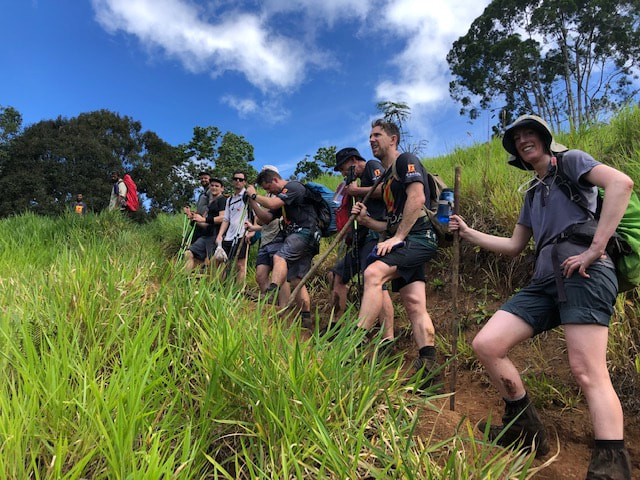 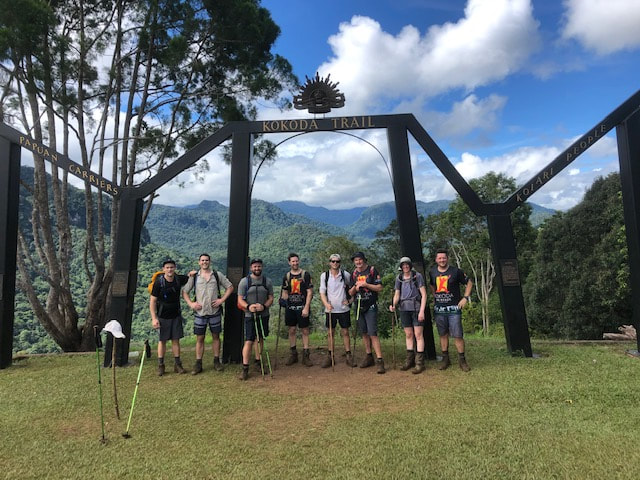 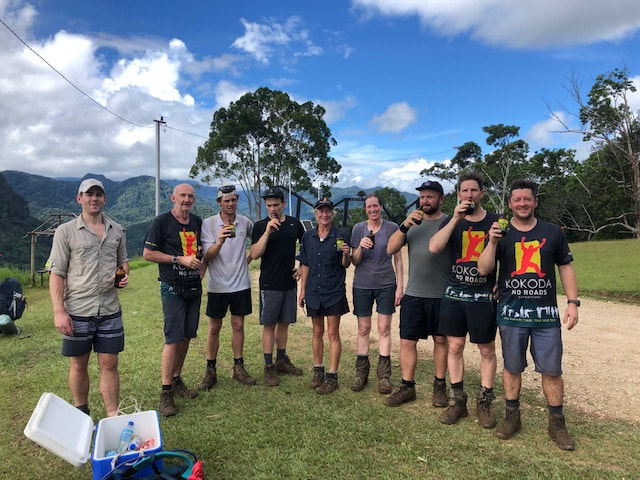 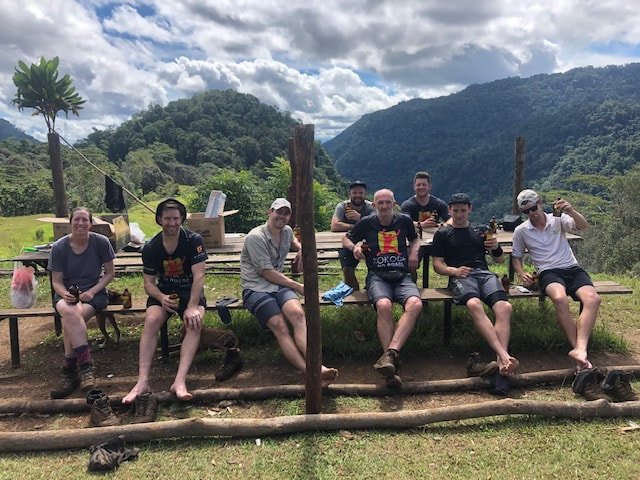 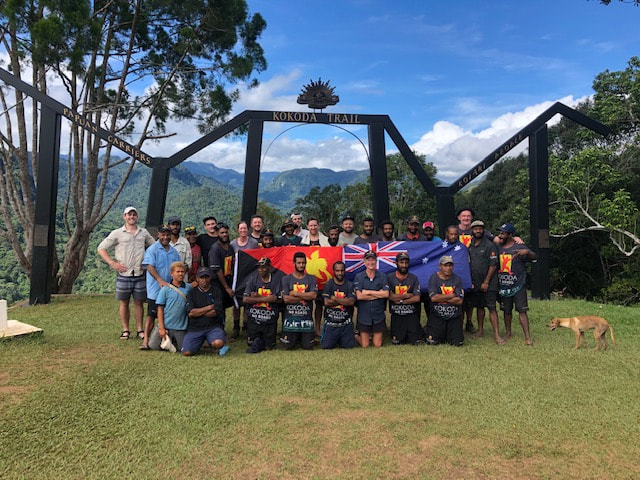 Day 3 was a 21 km hike over the top of Mt Bellamy to Kagi.  Rain, mud, wet gear, blisters and no time to whinge about it, we pressed on, experiencing the joys, spills and thrills of Kokoda.  As the mud deepened, many opted for a jungle stick to assist with securing their footing. Gandolf frequently forgot his trusty stick which brought more laughter.  The local Guides became our heroes as they prevented many falls. The chant of “Nice Gary” was heard frequently as each catch was taken. Arriving in Kagi, we were greeted by the local children singing that brought a tear to our eyes.  It also brought our first chance for a shower, and a dry hut for the rain drenched boys, a welcomed treat as the rain continued to fall. A second visit from the local kids to sing more songs saw Casey and Gavin unleash their Voice talents to the cheers of the kids, while Jocks dancing brought screams that will always be remembered.

The sun finally came out the following day as we made our way from Kagi to Agulogo.  As we left Kagi, the group handed out some much needed school supplies to the children.  Pamela also reduced her pack weight handing out some of her clothes for the women in the village.  We made it to Lanamau in good time for a quick shopping break, before walking to Efogi for morning tea.  It was then a hot climb up to Brigade Hill where a service was held and we learnt more of the horrific battles that occurred there.  It was then a long descent down to Menari where we enjoyed a rest and a late lunch, fully aware that we still had another large climb ahead of us.  We were all weary as we reached Agulogo, but were rewarded with a fabulous river to soak in, and an amazing reciting of the “Man From Snowy River” by Jock.  Our biggest day was done as we covered 23 km, almost 40000 steps and had finally made up for lost time.

Long ups…. Long downs…. Long ups…. Long downs.  Agulogo to Ioribaiwa was another huge day. The thought of tackling all of Maguli in one day was not something that attracted me, but the group pressed on with no complaint, making great time to reach Ofi Creek for lunch.  Each of us enjoyed the culinary treats produced by our masterchef at our creekside picnic, as the trekkers from the other companies were salivating at what was laid out for us…. We really were living the dream! As we finished lunch, the heavens opened up again for a wet walk to Ioribaiwa.  Our last night together was not without entertainment as Gary rushed to kill a large snake with “bad poison” that had crawled out from under the hut “Nice Gary”. We all slept a little uneasy that night.

As we awoke for our last morning on the track, we were startled at the dog barking at another snake, only to find the dead one had been mysteriously relocated.  Fortunately, thanks to Matt, it was relocated to another area where it wouldn’t cause any more scares. Off to Owers Corner we headed, in an out of the creek, excited at the prospect of reaching the finish line, and a little sad to think that our journey was almost over.  Regardless of the emotions, we all crossed safely and achieved the dream of completing the Kokoda Track with our new found mates. Beer, more beer and red wine saw the celebrations go well into the night.

To take on the Kokoda Track is a difficult challenge that many would never contemplate, let alone completing it with an added challenge of doing a fast crossing in the extreme conditions that we experienced.  This group would all agree that it’s an amazing adventure, well worth the investment of time and energy to complete.

Hard and fast, there is definitely nothing more exhilarating!