Great adventures begin with an idea to challenge your limits, to remove yourself from the materialistic world and experience the wonders of another culture in a remote land. There's no better way to experience this than on the Kokoda Track.  Phil, Ian, Fitzy, Clarkey & Noons - five mates from Cobram who sacrificed footy (and a new wife) to achieve their dream.  These five were joined by John and Jack, a father and son from Katherine (Jacko being the youngest I've taken on the track at 14) and Jacqui, an adventurous young woman from Queensland.

We commenced our journey with an early start over a torchlight breakfast, before heading to the airport for our flight ….. then after a 5 hours, we began our adventure again, relieved that our flight finally took off.  The delays lead to altered plans, two supermarkets visits and a dusty PMV ride giving the group time to soak in their home for the next 9 days, reaching Kokoda by dusk.  As we tucked into bed that night the heavens opened, adding to an already sodden track.

And so we started the 96 km of tough, beautiful terrain, passing locals waiting at the bus stop, greeted children walking to school and met our first challenging hill up to Deniki. As the beauty unfolded John located a snake and questioned Steve as to which area was his front and backyard, setting the scene for our fun filled adventure.
We made great progress to New Isurava for lunch, where Fitzy made the most of playing with the local children,  and humoured us with his spear throwing before Clarkey took ill… we all thought the worst as the big fella deteriorated as we had to slowly press on to Isurava battle site for the night. Fortunately, after a sleep, the big fella came good and continued on with another big walk to Templetons, enjoying a refreshing dip in the creek and a well earned sleep.

The group were fit and fast, making up for the earlier delays easily and allowing time on our way to Kagi to visit Myola. Phil scared Clarkey and Fitzy enjoyed a private viewing of a munitions dump while Steve was on sentry duty, adding to the list of saved Kina - all the more beer money for our end of trek celebrations.
​
The rest day at Kagi passed quickly as we attended church, had time to recharge and be entertained by the locals. Fuelled by laughter and the sounds that Newelly heard, we headed down to Kavovo to deliver the Kokoda Track Student packs to the school - always great to give back to the locals and see the developments that are happening to benefit the children in this remote region. 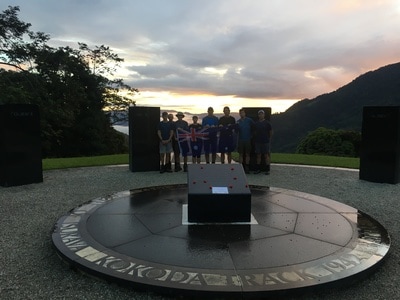 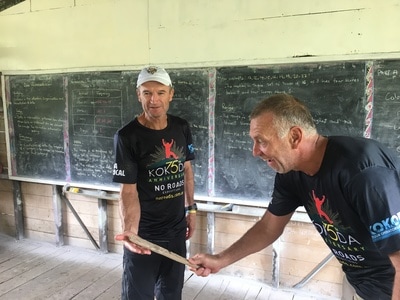 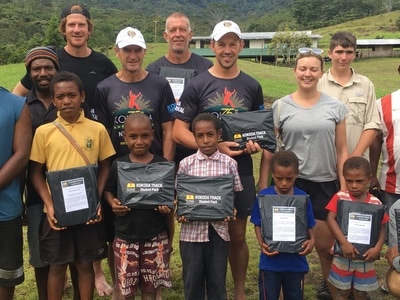 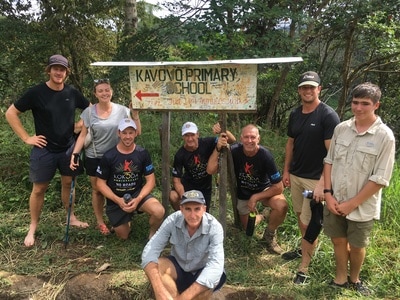 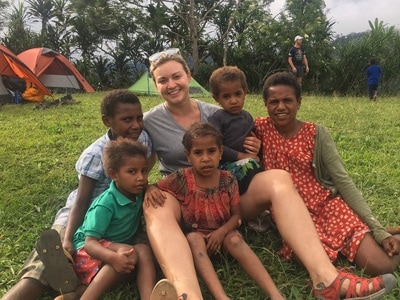 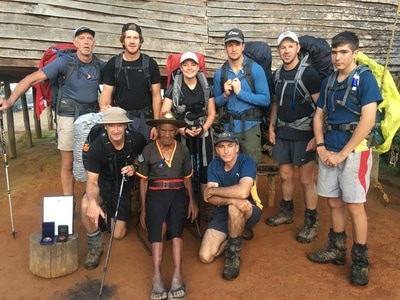 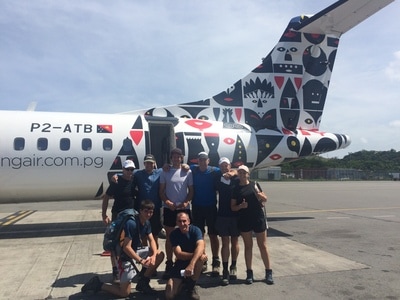 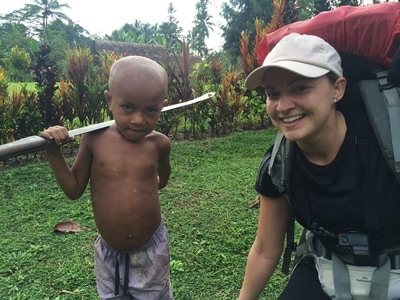 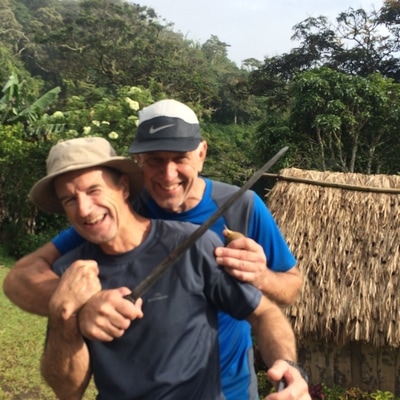 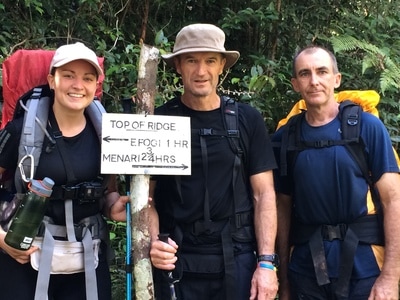 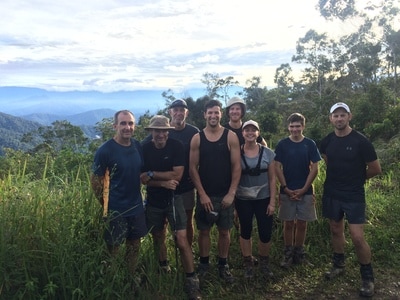 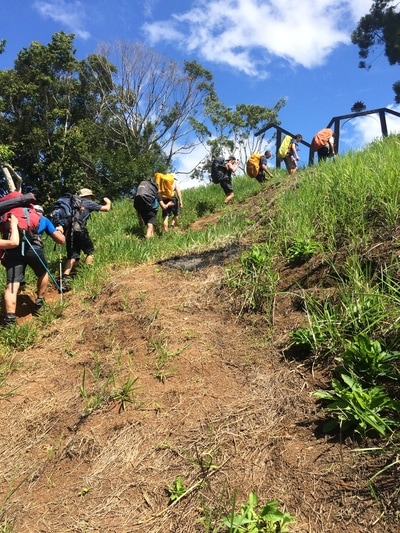 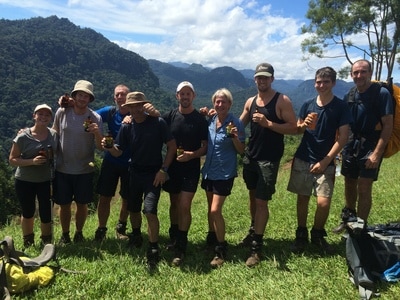 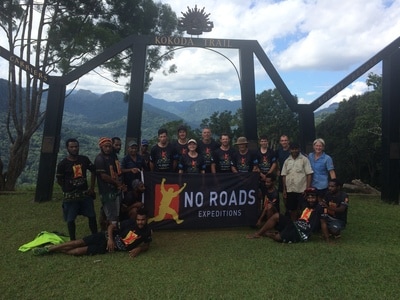 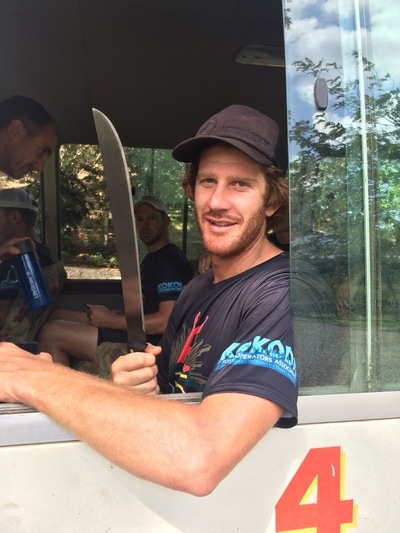 The group also spent time playing with the porters children - Jacqui playing maths games - amazing to see the progress they’d made since learning this game from our education trek last year. Jacko made a fishing rod and fish hooks from Coke cans, determined to catch himself a fish. Joke telling was a major focus of the evening with the wide mouth frog forever embedded in everyone's minds.

As we left Kagi we were farewelled by Havala, the last fuzzy wuzzy on the Kokoda track. Inspiring for the group to have the chance to meet him and be able to give thanks for helping our brave soldiers.

We then headed into unexplored territory following the path of our soldiers over Mission Ridge - a short cut the boys said, which meant a local track with a very slippery downhill section and a tough hot climb up over the ridge that made us all appreciate what our soldiers endured, getting us to Brigade Hill 2 hours earlier than usual. After a service and an early lunch we were rewarded with a swim in a sun soaked river before the heavens opened up as we reached Menari. Who needs TV when you can be entertained by the local children making their own fun in the mud, and watching Fitzy have a game of touch with the locals - not sure who the bigger kid was, but the fresh pineapples topped off a fabulous afternoon as we sat and watched the remainder of the day pass by.

The pace was set again as Jacko demonstrated the strength of youth by running up sections of Maguli… fortunately for the Cobram lads, Noons didn't think this would make a good footy training drill. We were treated in Nauro to an interactive culture talk as Max demonstrated his basket making talent - certainly a highlight to witness and had the whole group entertained for hours.
​
Day eight brought very muddy, slippery conditions, well endured by the group as we paved our way over Maguli and on to Ofi Creek. Bad news from home brought forth the importance of mateship, the group banding together to ensure the true meaning shone through, giving the final walk up to Owers Corner on day 9 even more meaning.  Over a celebratory beer as we completed the trek, each one of us knew the true meaning of a mate - not just a friend, but someone whose shared an experience, gained mutual respect and provides unconditional assistance.  This group learnt the true meaning of mateship.  Another memorable crossing of the Kokoda Track.