This year's Kokoda was going to be different - setting out to accomplish the Kokoda track in five days. The team that tackled it, were adventurous by nature and stronger than I thought possible. It was going to be their testament on the journey, that which is Kokoda.

I had always conveyed to the group that day 1 and 2 were going to be tough. What I didn't know, was that the other days were going to be just as tough to follow.
So back to the beginning. We arrived at Popondetta. The girls quickly introduced to toilets on the track - see the long grass girls... A three-and-a-half-hour bus ride would take us to the start of the Kokoda track. Ahhh, the bus ride. Hilarious! Pictures to follow. We met our porters with the inaugural hand shake and shirt exchange. I there explained to the group - 'When a porter’s hand is extended on the track, you take it. They know the track and could walk it with their eyes closed'. This would be witnessed many a times along the track. Just how much? They were about to find out. We slept ready for an early start to day 1.

Day 1 saw us departing Kokoda, expected to finish at Eora Creek. The first day began rocky with April (my partner experiencing vomiting slight fevers) her pack was distributed amongst the group and porter Robin by her side. She found out that her body weight would be enough to get up hills - egos were left at the door. Clement instructing her that there would be no pack for the rest of the day. Isurava Battlefield was our first lunch stop and Kokoda had already hit the hearts of this team. We sat in the silence, felt the immense gratitude and we were only just beginning the journey of those that had gone before us. The group was already experiencing the four pillars – Courage, Endurance, Mateship and Sacrifice. They didn't quite realise just how much those words would impact their trip, until the end. Day1: expected finish achieved. We made it to Eora creek, we washed in the creek, ready for dinner and bed.

Day 2: Trekker woke at 4:30am. Roll up, pack up, breakfast, and set off by 6.00am. By day 2, they soon learnt that Lester would give us hope in the morning ritual. 'Are you ready?' With a little apprehension but strong wills, we embarked on our big day. Day 2 tested us all, physically, and mentally. Our bodies were already feeling the onset of fatigue - but just how much was ahead of the group, they had NO idea. We hit Templeton's 2, Templeton's 1, Mt Bellamy (Kokodas highest peak) and Lunch. We made it to 1900. Jodie had become the best person to make the coffee, and this would become her role the whole trip. 'Would you like a coffee', the sweetest words ever spoken. Kristen at this point was inspecting sore and blistered feet, and was prepared, that this would be something she would be dealing with until the end. With every downhill, it became a whole new challenge. My hats off to this strong woman. Her strength was, and is to be admired. Knoxie and Kristen were forming a bond that would see them through. Kagi was in our sights, but felt so far away. All I could hear was the echo of Mel’s laughter. I would later hear that her chatter got Lance through one of his toughest days. 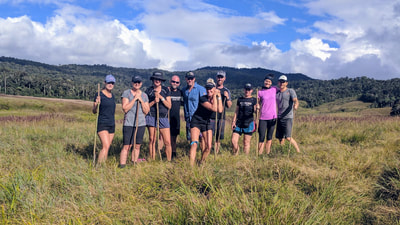 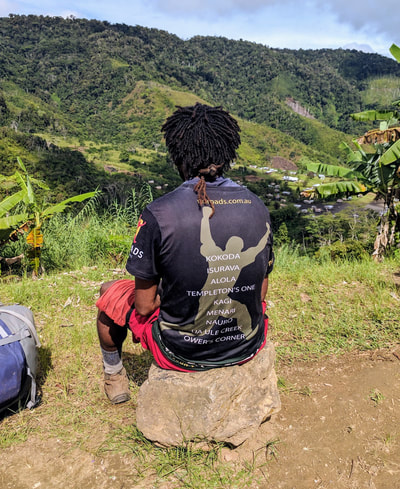 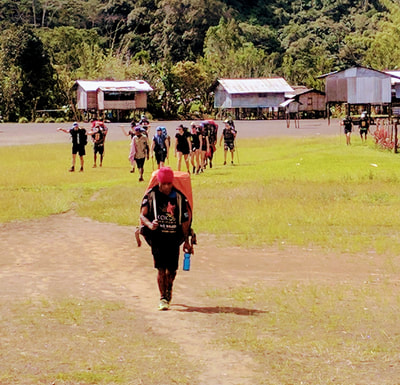 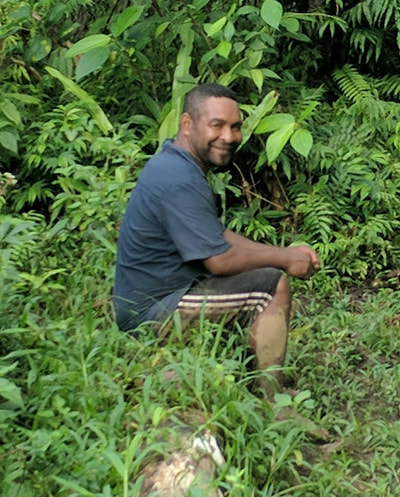 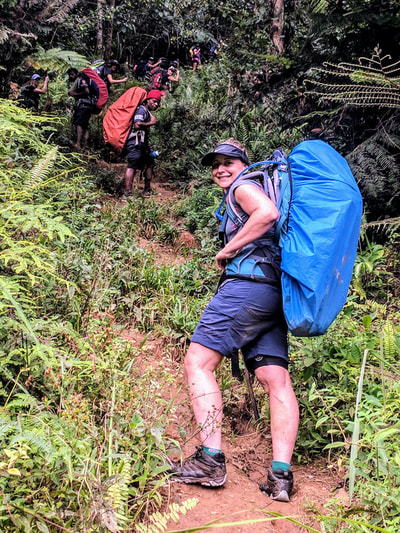 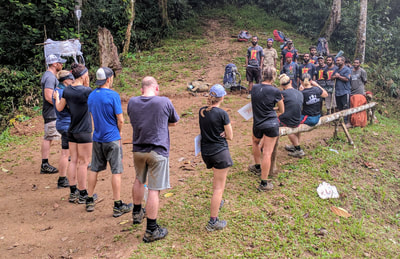 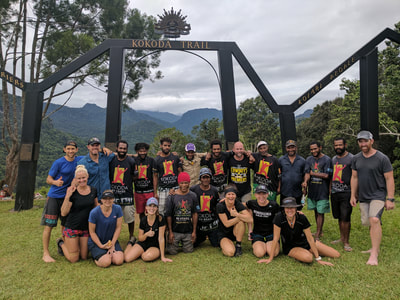 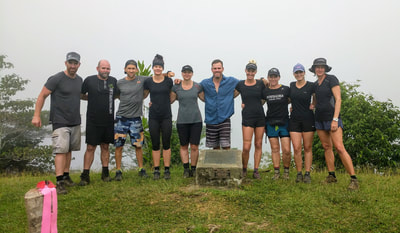 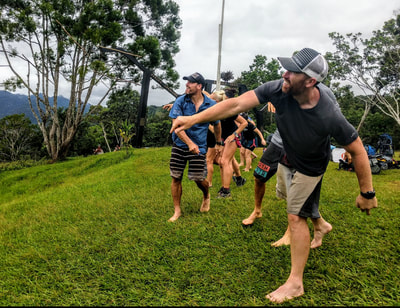 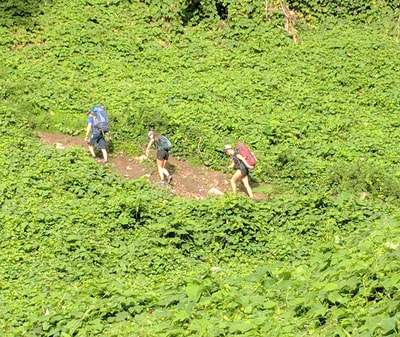 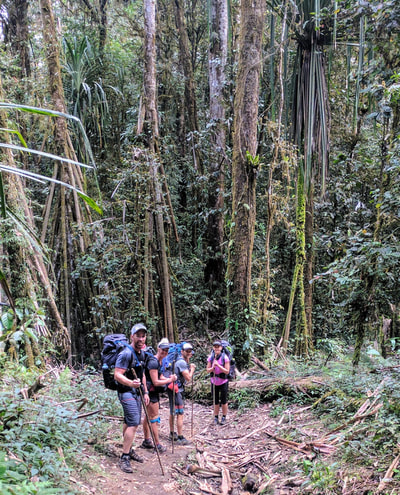 Day 2 we finished at Kagi with tears of joy. The community saw us in like stars in the night. This was most of the boys home town, and to have them share it with us was something we will always treasure. Happy birthday Casey, a day we'll always remember. Not everyone gets to experience a birthday on the track. Happy birthday from all of us, and the Kagi village.

Day 3, did you say late start? Wake up 5:30am departure 7:30am. 'lock and load'. Departing Kagi, headed to Menari, via Efogi 2, Efogi 1 to Mission Ridge. Al bringing comic relief all the way up Mission Ridge (in his words) “Cos' it's a bloody mission to get a up there”. A moment to reflect with lunch at Brigade Hill. Exhaustion was well under way. This brought a true understanding of all that our soldiers endured. We arrived in Menari and not a moment too soon. 5:30pm gave us enough time to buy some well needed snacks from the village - cherry tomatoes, sweet potato and the tracks famous Twisties. We washed off in the river, played a little soccer, rolled out our bedding, ate dinner and tucked in!

Day 4: departing Menari on time 6:00am. Off to Brown River, which gave some of the crew the chance to wash off. They were headed on to the famous 7 false peaks, always living up to its name. Lester confirmed each peak, as we breathlessly climbed. Laura reaching the top with tears of emotion. Well done all! Lunch at Nauro, drying a few items of clothing in the sun while we could. Then we were off, but soon realised if you over eat at lunch you pay the price - as those hills don't wait for digestion. Note to self - ease off the salami. Ofi creek we made it! Now with the decision to push on to Ioribaiwa.

Clement and I decided that if we made good time and porters and crew were holding up well, it would be a good idea to continue. Allowing us to finish a little easier on the last day. Good decision. Ioribaiwa reached.

That night after dinner we sat around the table and talked about our happiest moment on the track, and what we will take back as a personal lesson learnt. This was a stand out. The team were experiencing Kokoda, and all its glory.

Day 5:  6:00am we depart. This becomes a day that is bitter sweet. Just when you thought you were glad to be finished, you are overwhelmed with 'Is this really over?'. I explained the river crossings by 'Don’t bother skimming over the rocks, just walk through the water’. River crossings done. Now on to Imita Ridge. Kokoda saving the best to last. In breathlessness but with a sigh of relief our boys - the Porters came together to sing their National Anthem. Could this be the moment that breaks Barton? Almost. Confirming he may have shed a tear.

Finish line; Owers' Corner. We did it team. 5 days. A muddy track, rain, sweat, tears, niggling pains - all that is the Kokoda Track! Will I do it again? For as long as I can.