The group consisted of 12 trekkers and 13 porters.  I actually played a little part in bringing this bunch together so I knew or had met everyone prior to heading over to PNG.  There was a very strong Victoria Police influence on this trek and it was a great privilege to walk with a couple of blokes who I joined the force with 35 years ago.  It was also a wonderful thing to have a few current work mates and blokes I’ve known for a fair while along too.  Only 2 of the group, Jeff and Jared (Jed) have never been cops but they fitted in perfectly.  Hopefully they didn't get sick of stupid police war stories. Anyway they both had very interesting stories of their own - Jed’s deer hunting exploits and Jeff’s work around the country, especially the outback.

So in reality this trek actually kicked off a couple of years back and while names and numbers fluctuated, we eventually got there.  A lot of credit has to go to Paul (affectionately known as Barney) who managed to keep this dream alive. 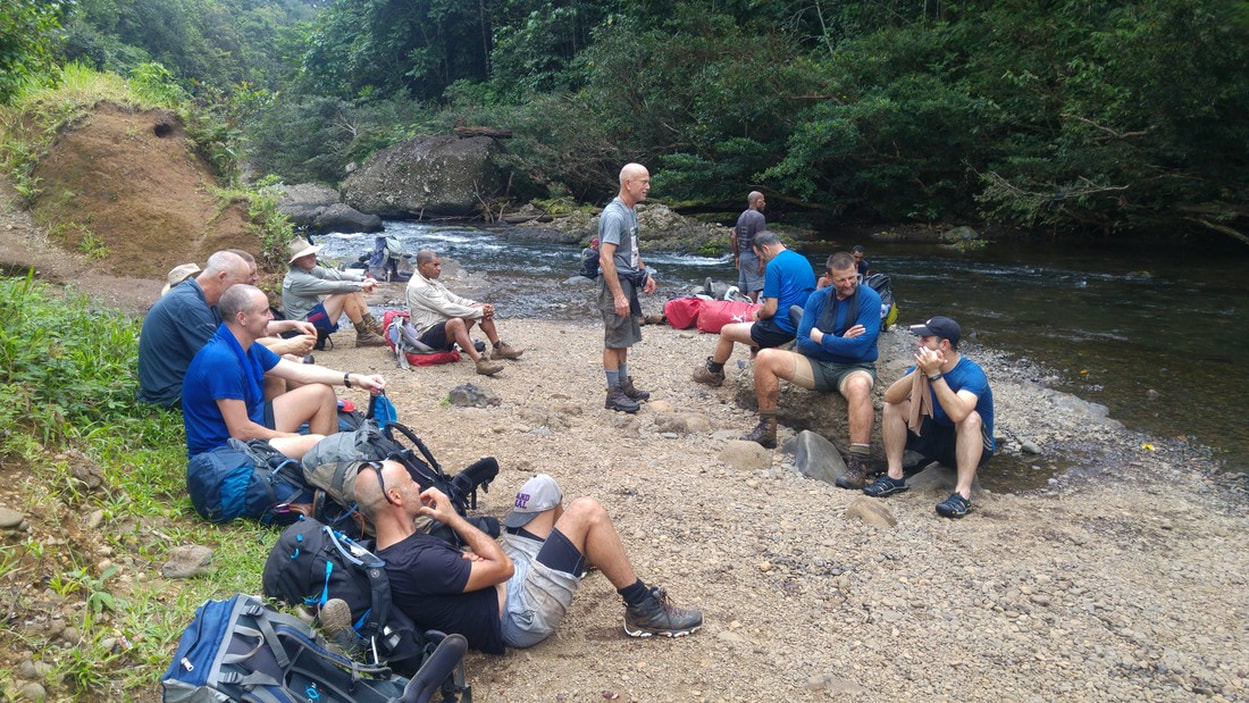 I thought my very comprehensive pre-trek briefing at the Holiday Inn went well, especially the part about not offending the porters by using bad language or crude jokes.  Well, it took Mark all of about two minutes to break both rules and have the trekkers and porters begging for more.  Mark not only has an incredibly large repertoire of jokes and poems but he is the best story teller you’ve ever heard. The down side was that no-one else felt comfortable trying to tell a joke because of how high he’d set the bar.

Our porters for this trip were led by Robert and Steve was the Lead Man.  Base was the chef again and Raks fresh from his first experience as Lead Man had to be content with being the medic and general pointer this time around.

The flight to Popendetta was uneventful although we had to be content with an old Dash 8 Aircraft after thrill of the new ATR the previous week.  No issues with the truck ride to Kokoda either although it did seem to drag on a bit despite all the new bridges.

We got everyone to Deniki in one piece although things went a bit silly after that.  My old mate Dale was having an absolute ball and just in awe of PNG and its people.  Then on morning two, unbeknown to him, he dropped his phone and kicked it off the track.  Robert and Kenty went back to search for it and after nearly an hour of ripping up the jungle it was Dale himself who found it.  Thank god!!!   Back to being in awe of PNG and the people.  By lunch time that day we were able to relax at Isurava Battlefield and reflect on the heroics of the 39th and 2/14th Battalions. 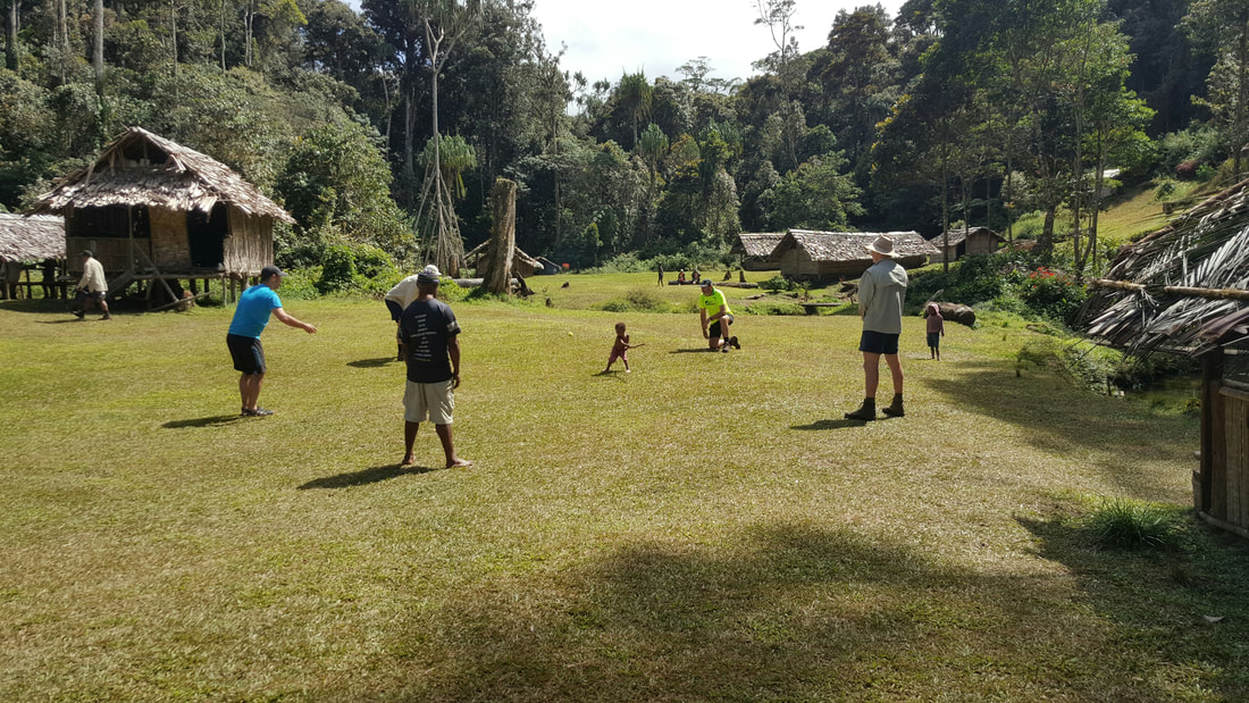 Barney woke up in Alola with a bit of a bug and that was to be the start of things to come. After lunch that day Chris came down with the same bug and of course Shannon just happened to be on hand to video the first explosion of Chris’ stomach contents.   Chris had been absolutely flying up until this point so it was a real shame to see him cut down.  Barney and Chris battled on and we weren't at all late getting into camp at Templeton's.  We spent the Sabbath at Templeton's and it probably came at a good time because Jed and Steve (Bully) also fell victim to the same bug.  Those of us who were healthy attended a short Sabbath service led by Josh (one of our porters) and after the service we were allowed to head upstream for a bit of fishing.  Ross (The Chief) and Jeff led the charge and four little but edible rainbow trout were caught.

When we headed off to Kagi after the Sabbath, Mark and The Chief had both caught the dreaded bug.  It might have slowed Mark down marginally for a little while but it didn't dent his sense of humour.  It did put him off his favourite food – sweet potato.  As for the Chief, nothing can slow him down.  At age 67 (hope I have that right Chief) he is still one of the fittest and toughest blokes you would ever meet.  His solution to feeling crook is to walk at the front all day.  Jed was obviously feeling better as he kicked off the day's trekking with a rendition of Johnny Cash's A Boy Named Sue, American accent and all.   We had lunch at 1900 Camp and enjoyed a game a stick cricket with a couple of local kids.

At Kagi and Dale managed to con Gerry into selling us some of his magnificent manderines.  Despite the green peel, they were perfectly ripe.  We travelled to Menari via Mission Ridge and unfortunately the bug had decided to re-visit Jed so there was no more Johnny Cash renditions. (There is a god).  Eventually Mick and Jeff got a touch of the bug as well although it didn't really slow them down.  Fortunately the rest of us got through the trek without catching it.  The good thing was that it was quiet on the first aid front.   Raks had a fall and got a decent cut on his shin and we strapped up Mick’s ankle as a precaution.   The strapping must have worked because Mick appears in heaps of photos and has a smile and his thumbs up in most of them.  Most importantly he stopped rolling his ankle depriving Shannon and Chris of their sport watching Mick’s ankles at work.

We managed to buy some buy some pineapples at Agologo and I was lucky enough to get to carry a 4 kilo piece of fruit up to New Nauro.  What a hoot!!!  It ended up being worth it because it was the best pineapple I’ve ever had.

As we neared the end, the only trekker who hadn't had any tumbles Jeff and he was clearly heading for best on ground.  That was until he decided to have two very public spills in the space of five minutes on the final day.  Perhaps it was the dreaded bug which caused it but nonetheless it showed he is human.  So I think B.O.G. has to go the Bully by a small margin over Mick the quiet achiever and Barney who really dug in.   Bully’s tumbles weren’t so public and he just went about his business with a minimum of fuss.  He never complained and shared himself around, sometimes at the front and sometimes at the back.  Somehow he managed to complete the whole trek in long pants which I just couldn’t do.   Jed won the Toilet Roll award for spending the most time right up the Lead Porters clacker.  His prize included being re-united with his Swiss Army Knife which had been confiscated at the airport before we flew to Popendetta.  Jed must have missed that part of my briefing. 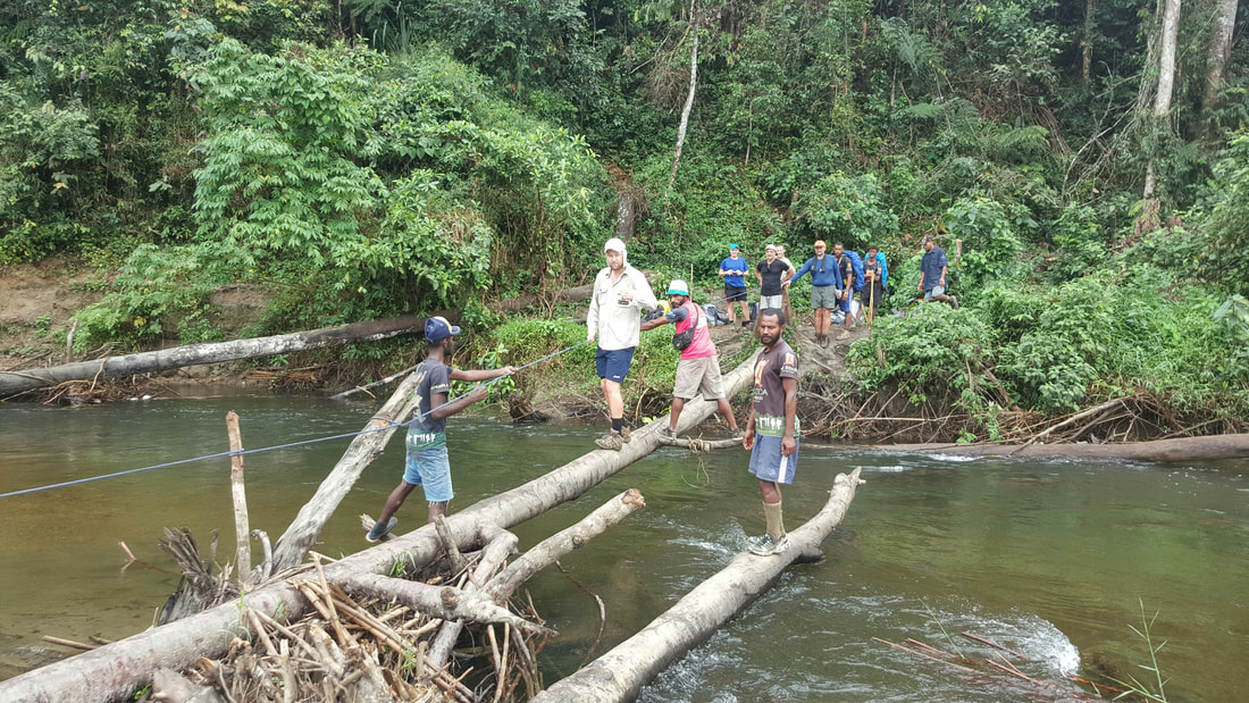 Shannon and Ali didn't miss a beat for the whole trek.  Ali, as usual was particularly interested in the local farming and produce.  He’s promised to send Robert some books on how to preserve produce.  Make sure you don't forget Ali, because Robert wont.

By the final day Ali and Shannon were still full of beans and our other race horses, The Chief and Mick were back to their best so I thought I’d offer up the chance to race a few of the porters up Imita Ridge.   Only Ali seemed happy to accept the challenge although Shannon and Mick sort of tagged along.   Of course our Porters take this sort of thing very seriously and the official results were as follows: 1st in a time of 25 minutes Brian (General Porter), 2nd @ 27 minutes Abraham (General Porter), Equal 3rd @ 32 minutes George (General Porter) and Ali (trekker).   However under handicap conditions I’ve had to award outright 3rd place to George.  His pack weighed 20 kilos compared to Ali’s 14 kilos.  Sorry Ali but that’s the rules.  Shannon reckons he deliberately gave them all a head start and still finished in 34 minutes but that remains unconfirmed.  Just for the record the peloton took 42 minutes.

We ploughed through the last day and arrived at Ower’s Corner just after midday.  Despite a bit of illness we had a great trek and Dale was still in awe of PNG and the people. I hope you blokes enjoyed it as much as I did.   Thanks for the great company and a great adventure.  A special thanks for the effort you went to interacting with our Porter’s and the locals.

PS.  Wish you could have all been there for dinner at the Royal Papua New Guinea Yacht Club.