Of course this trek coincided with the 75th anniversary of the beginning of the Kokoda Campaign.   Ours was just a small group of 5 trekkers plus me and the porters.   But it was very busy on the track.   There were a couple of No Roads expeditions following us and we passed six treks going the opposite direction in the first couple of days.  Many of them were school groups with large numbers of kids and teachers and even larger numbers of porters.  Their camp sites must have resembled small cities.

Our group consisted of husband and wife Jim and Andrea and their son Aiden and Greg and his son Kris.  They are all from W.A. and Andrea was little disappointed to learn a couple of other trekkers had withdrawn. She would have liked to have met them and had some female company even though they were Victorians.  Our porter group was led by the very experienced Simon while Raks (normally a medic) had his very first opportunity as Lead Man.  He took his new role very seriously and did an absolutely fantastic job.  Base was our Master Chef and performed to his usual high standard.

Our flight to Popendetta held a little surprise for us.  We got to fly in one of Airlines PNG’s brand spanking new ATR Aircraft.  I’m sure it was just a familiarisation flight for the pilots because there were only 10 passengers on an aircraft which holds 70.  Strangely, you board the ATR from the rear and row 1 is at the back of the plane.  Anyway, take it from me the ATR is a very nice plane.  The truck ride to Kokoda was uneventful for us but not for a palm oil tanker which was travelling the other way.   It was the most bogged vehicle I’ve ever seen.  I did notice when passing through the following week that they had somehow freed it.  I’m sure Andrea will be relieved to hear that.

Well, I knew early that I had my work cut out for me dealing with a highly intelligent, knowledgeable and inquisitive group of trekkers which included a Greg the Zoologist and quickest wit on the planet, Jim and Andrea the Botanists, Aiden who is studying Biology at Uni and Kris who is still at school.  Throw in that Andrea is a Justice of the Peace and Jim is a pilot, earth moving contractor and former Army Reserve Member.  There were more credentials than toes on this trek.  I didn’t really think there was anything I could tell them that they didn’t already know.  It inevitably became a great learning experience for me but I did try and convey a little bit of WWW 2      information. 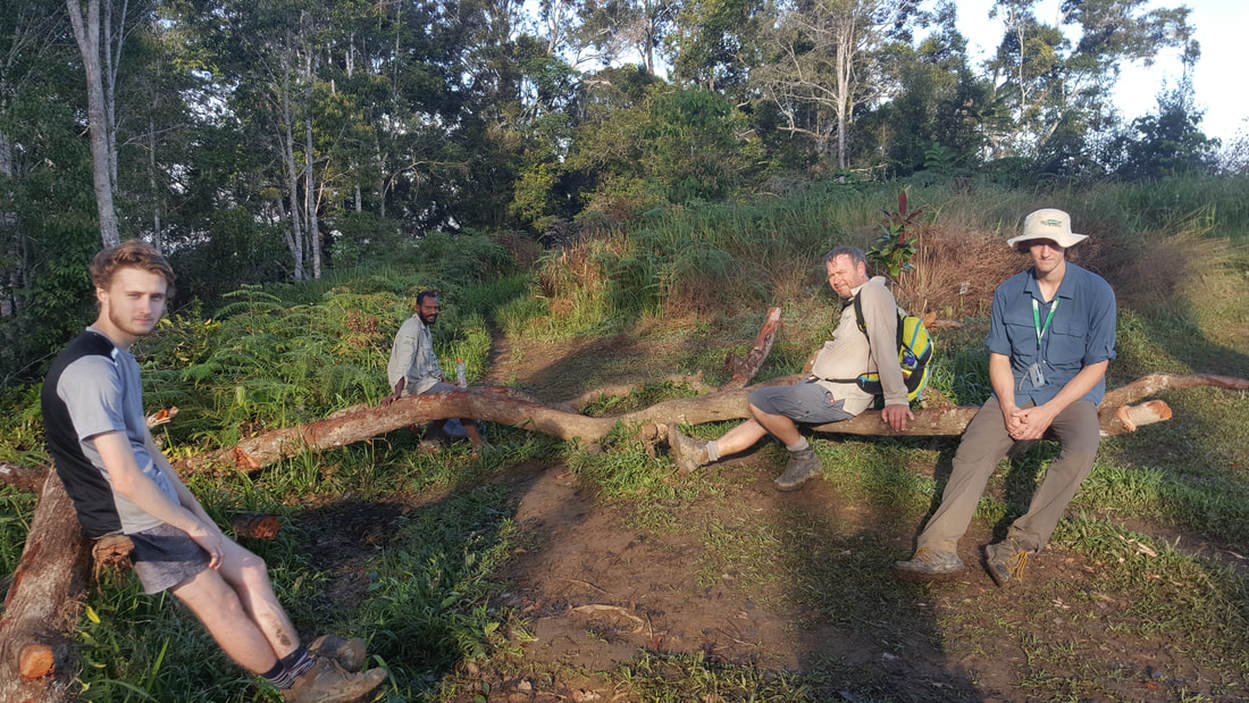 Andrea very quickly got used to being the only female on the trek.  I guess she didn’t have much of a choice really.  Her fitness and strength on the uphill stints was amazing and I was quite happy to settle in behind and allow her set the pace.  She led us from Menari to New Nauro and got us into camp before 1.00 pm which is a record for my treks.

From the very get go Greg (Zoologist, majoring in birds) was on the lookout for species he hadn’t seen before and that I’d never heard of.  Equipped with an expensive set of binoculars and a PNG Bird Book, he ticked off around 50 unique birds.  I’d had the occasional Bird of Paradise pointed out to me over the years but it was amazing to be with trained eyes who were able to find them on display in all their glory. Unfortunately we weren’t able to corner the elusive Oomadoodle Bird.   Who would have thought that bird watching could be so much fun. There isn’t much if anything that Greg doesn’t know about our feathered friends and Jim and Aiden are no slouches either.  The Porters, Raks in particular showed great interest in Greg’s 3000 Kina pair of binoculars and I had some anxious times when Greg kindly allowed Raks to disappear with them.   Fortunately they always came back in one piece or however many pieces there is to a set of binoculars.  Anyway, Raks often had to fight Aiden for the bino’s.  Come to think of it, Greg often had to fight Aiden for them.

Night 3 at Templeton’s was a time celebrate Kris’ 18th birthday.  Base came to the rescue with a very interesting birthday cake which was much appreciated by all. Andrea came prepared with candles, number 18 tinsel things and a block of melted chocolate.  Apart from being his birthday I sensed this was about the time Kris was over any early inhibitions he may have had about how tough the trek was going to get.  Kris has a younger brother Kurtis who wasn’t on the trek.  Although he was mentioned so often it felt like he was there.
Kokoda Expeditions with No Roads