It was a relief to get to PNG to the warm weather and as far away as we could get from winter in Victoria. Weather reports were indicating that Melbourne was in for some wet and cold weather in the coming weeks!

We all arrived safely in Port Moresby and had a great group of 8 trekkers. Everyone was a bit nervous and anxious about what lay ahead for them. We had two brothers, Andrew and Russell, a husband and wife, Anne and Mark, plus three mates from Orange in NSW (Ben, Tony and Mark) and Helen travelling on her own from Perth, WA. The boys from Orange heard that it was actually snowing in their hometown the day after they left.

Our briefing on the first night at the hotel, allows trekkers to hear lots of information and ask as many questions as they need to. There were not too many smiles when I told them that we had a 4.30am “packs down in the foyer” the next morning. A few thought it was a joke, but soon realised that wasn’t the case.

So, 4.30am came around very quickly and after what felt like no sleep at all, we were getting ourselves sorted and eating breakfast. From here it was off to the domestic airport for our 6.50am flight to Popondetta.

This flight is a great chance for trekkers to see the Owen Stanley Ranges from the air and see the terrain that they will be walking in the coming days.

After landing in Popondetta, we make a short stop at the supermarket and the museum in town before heading off for our 2.5 to 3 hour drive to the village of Kokoda. This trip is a bumpy affair and once the bitumen finishes, it is potholes and dust from there.

A short break at the Kumusi River was a relief from the truck. It was great to be able to walk across the new bridge that has been built there. An engineering feat for PNG - it is the longest bridge in PNG. 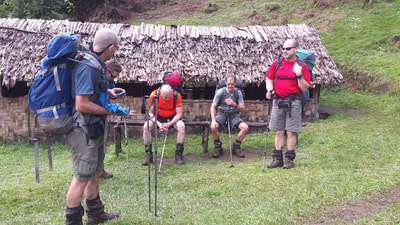 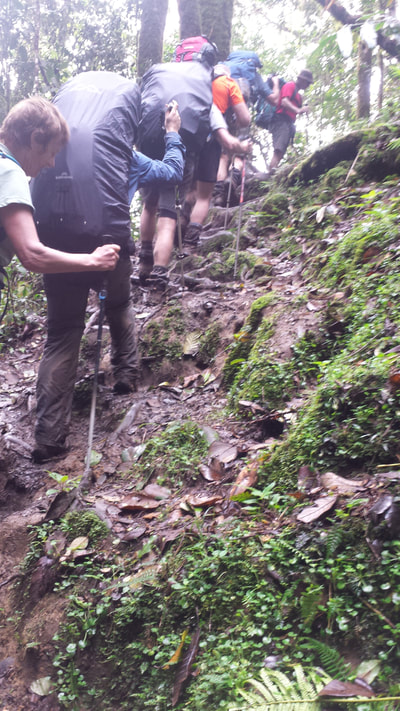 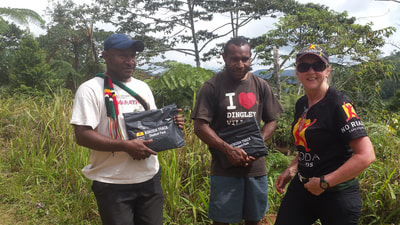 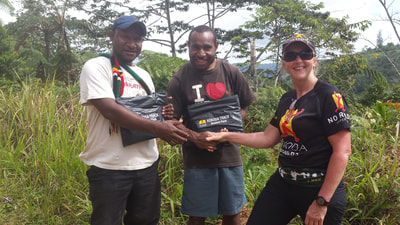 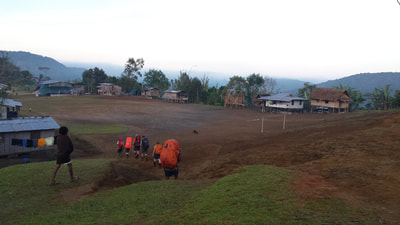 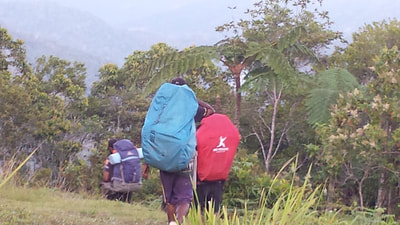 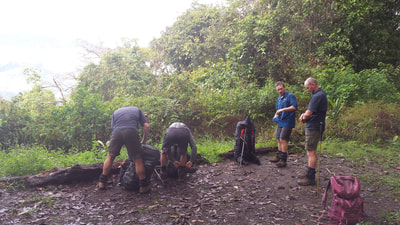 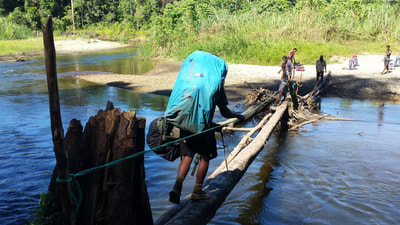 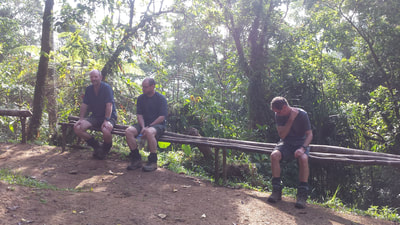 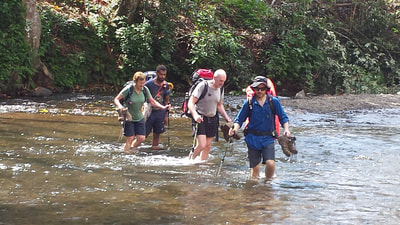 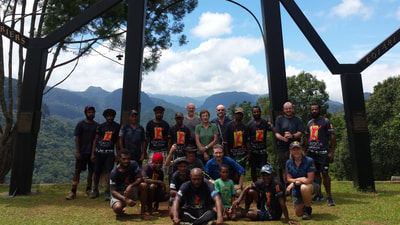 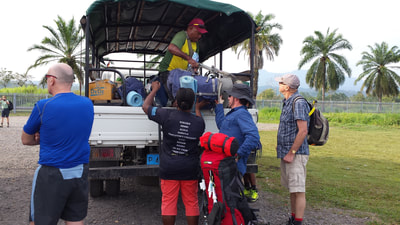 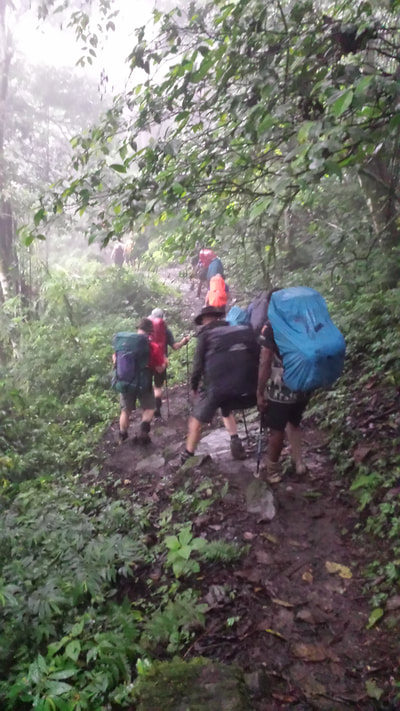 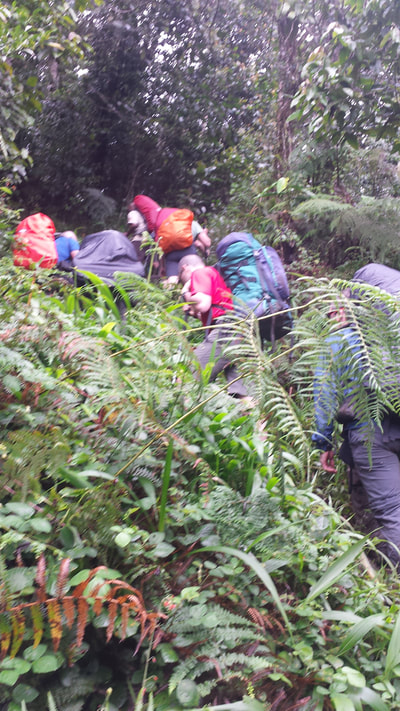 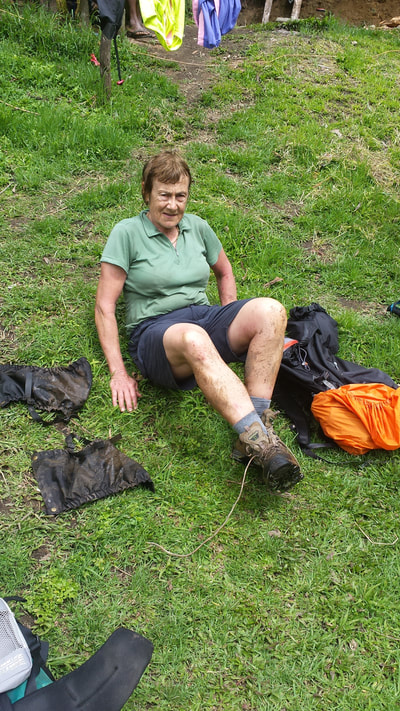 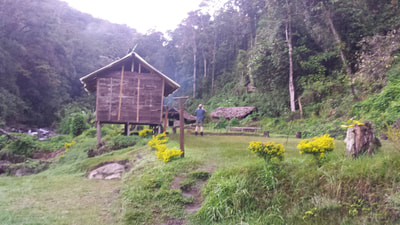 Finally arriving at Kokoda we went to explore the Kokoda Plateau. The trekkers learnt the history of this significant site and had time to wander around and take lots of photos. It was then back to the camp for lunch and to meet our Porter team.

The first call for “packs on” was made by Lexun our Lead Porter and the trekkers nervously headed off for their adventure. Stopping for photos at the arches is essential as the trekkers are fresh, clean and ready to get going.

The first hill up to the village of Deniki tests everyone’s stamina and endurance. This hill can be a bit of shock to many trekkers as it is their first big climb of the Track. Some of the trekkers were carrying their own packs, loaded with probably too much, so this hill tested them for sure.

A couple of trekkers had to have some gentle encouragement from me to get them to the top. This was later referred to as being “cattle prodded” up the hill. At the time there was no laughing, but as the trek went on, it became quite a funny situation.

Arriving at Deniki was a relief for everyone and a time to review some of the weight in packs. There were a few items that were all of a sudden deemed “not needed”.

As the evening came around, so did the rain. This became a common occurrence each night on the track. The heavens opened and ensured that the Track would be muddy, slippery and wet the next day.

Over the next 3 days, we had wet conditions and of course this means there were some spectacular slips and falls. The jungle trees of Kokoda were no match for a trekker slipping out of control.

Visiting the Isurava battle site is always an emotional time. Everyone took part in the service we held there and it was even more special for one trekker whose Father was part of the Kokoda Campaign.

We continued to slip and slide our way across the Track and the rain each night ensured we were in for an adventure the following day.

Day 3 was our longest day and even though we were moving at a good pace, a couple of our trekkers were starting to feel the pressure of day after day of trekking. We reached the Kagi Gap to find the beautiful view covered in thick cloud. We have a very steep and treacherous downhill section to complete before we get to the village of Kagi. As if it was right on cue, the heavens opened as we started our descent down this hill.

This of course made things interesting to say the least. We had torrential rain and this created mud and slush like you would never believe. Everyone was already tired from a long day, so these conditions meant that most of us ended up on our bums a number of times before we got to the bottom. We were literally drenched and feeling a bit sorry for ourselves when we finally made it to Kagi.

It was a relief to know that tomorrow was our rest day, as our Porter team observe their Sabbath. It would be a chance to get some clothes washed and dried and ready for the following day.

Unfortunately we had to say goodbye to two of our trekkers here at Kagi. With knee soreness and feeling unwell, we called for a helicopter to come and pick them up. The whole village came out to watch the Chopper land and take off.

In the afternoon, we headed to the Village of Kavovo to present the Teachers with Student Packs from the No Roads Education project. These student packs have exercise books, pencils and pencil cases for the students of the school. The Teachers were extremely grateful for these well needed supplies.

To our delight, the remainder of the Track was dry and so we moved along at a great pace. As usual the sun came out quite strongly as we climbed the hill from Efogi 2 to Brigade Hill. This ensured that we were sweating, puffing and panting all the way to the top. It is a tough climb up here.

Onto our camp at Menari after Brigade Hill and time to rest and relax after such a long and hard day.

The swamp was nice and dry, so this didn’t take long to get through. This was a relief, as I’ve been in there before with mud up to my shins.

The last part of the Track seemed to go very quickly and it wasn’t long before we were at Ua-Ule Creek camp - our last camp of the trek.

I briefed the trekkers on the following day and the terrain we would encounter on our last day.
As always, the last hill up to Ower’s Corner is tough and with trekkers being tired, it can take every piece of your determination to get yourself up there. The trekkers were very relieved to see those arches at the top of the hill.

This group of trekkers were amazing! They met only 9 days before and were now parting as friends who had shared an amazing experience. There was always plenty of laughs and lack of empathy for anyone who may have landed in the bushes or on the ground. It was all in good humour and they were great fun to be around for the 9 days.