So... doing a 6 day Fast Kokoda (as opposed to the standard 8 or 9 day) seemed a good idea at the time! Now that we were in Port Moresby's Holiday Inn at our pre-trek briefing, with Track reports coming in of swollen rivers, bridges washed away , knee deep swamps and the worst mud in 10 years, to say we were apprehensive about attempting the "Fast Track" was an understatement.

As trek leader I had done one previous 6 day Fast Kokoda, but that was taking 40 hardened Australian soldiers from Townsville's 3 RAR - with the aid of helicopters to get us to Kokoda for an early start on day 1, and also it was in October when the Track conditions are generally much drier.  Now I had a group of 7 mere mortal, mostly mid 40 year old males, who, whilst they had no doubt trained hard, weren't exactly what you'd say "jungle/battle hardened" compared to my Australian Soldiers.   Nonetheless, we took solace that it was just going to be one foot after the other until we ultimately hit camp each night and of course we had the lure of completing the trek in time for the ANZAC Day Dawn Service and the much hyped lunch at the Royal Port Moresby Yacht Club.

So Day 1 was your typical up early, bags in the ute, a last "breakfast/supper" of bacon, eggs and coffee, and then to the domestic airport for the short flight over the ominous Owen Stanleys to Popondetta.  Despite most of the crew having experienced "developing" nations before, it was still an eye opener to see all the locals "milling" in the urban areas but then once we were on the back of the "Chiropractic Express" PMV to Kokoda, we really started to see how primitive life for the locals is with washing in the creeks, walking everywhere with large personal loads yet still happy to give us a generous smile and wave as we crawled on by. A short 3 hours later, we were 80 kms from Popondetta and the welcome sight of  Kokoda's mobile phone towers loomed before we saw the infamous Kokoda Plateau.  Whilst our porter team distributed their loads, we had a quick look around the plateau and a talk about the battles of Kokoda and a visit to the museum, yet I know deep down that the trekkers' apprehensive excitement was nerves building as they stole glances into the distance at the foreboding blue black mountains to the south.  A quick bite to eat, final preparations, we meet our new best friends the general and personal porters (or "Hand of God") as they quickly became known once the real steep and slippery downhills started.

And at 1.30 we were off, through the small Kokoda arches signifying the entrance to the Track, the end of civilisation as we know it for the next 6 days and 96 kms of "mud, sweat, tears and a whole lot of laughs".  So day 1 was completed after 8kms and the short uphill to Deniki, we were safely in camp by 4.00, tents up, getting ready for tomorrow's early start and our first treat for the trip - popcorn and cajun spice!  Everyone's in good spirits and shut eye by about 8 or 9 o'clock.  Then at 11.30 pm she started... a tropical downpour that came down in buckets - for 5 hours!  Thank God we were 800 meters above sea level because I fair dinkum thought we might flood!  Wide awake listening to the torrential torrent, wondering how the tents can hold up - only to then hear a kerfuffle from the 2 guys (Jimmy and Pete) who potentially didn't put the tent fly on as securely as one should, as a small tropical river made it's way through their tents, honestly, some of the language emanating from those tents would have made a fish monger's wife blush, all to the amusement of those of us in the dry tents and the others in the very dry hut a short 15 meters away!  Thankfully the torrent eventually became a mere drizzle by 4.30 am, a whole 30 minutes before our 5 am wake up call.

Day 2 - little sleep, but everyone in good spirits, save for Jimmy and Pete (our token Pom) - come on boys, it was just a little rain -your sleeping bags will dry eventually! We haven't even broken camp and Jimmy is the first recipient of the HTFU wrist band - something he wore with much pride, but using it as a free hit to have the world's biggest sooky la la whinge! A big day planned, Deniki to Eora Creek. The first real day and everyone goes remarkably well, whilst we've got the pressure to move a bit faster than most, we still get to enjoy the choko fields, the majestic views and of course the spirituality of Isurava Battlefield.  Having the whole site to ourselves was great and made our service very solemn without interruption - topped off by a rousing rendition of Advance Australia Fair, only to be humbled by the hauntingly beautiful voices of our porters who sang the PNG National anthem as the mist slowly made its way up the valley.  A quick visit to Con's Rock, pay our respects to Butch before we hot foot it to Alola where Frank the Master Chef has whipped up his tuna/cheese/noodle sausage rolls - a definite crowd favourite.  It was great to see a memorial plaque being erected for Brigadier Potts at Alola which was where the Battalion HQ was situated during the battle of Isurava.  Right on cue, the rain starts again as we begin our first descent down to Lala creek, but before long we were safely at camp at Eora about 4.45, time for a quick wash in the creek, a small bourbon and coke and a talk from Kila and Lester (our Local Guide and lead Porter) about local PNG customs.

Day 3 was playing on my mind, we had to get from Eora Creek to Kagi - 3 big ascents and a killer downhill into camp. A big day in anyone's books.  We set off in earnest at first light (5.55 am) - and made it in to see the Kagi welcome singers just on dusk - about 5.55 pm.  One of the biggest days I've had on the Track and we never thought that slippery red clay down hill to Kagi was ever going to end.  Head torches on as we stumbled into Gerry's camp site - yep, you guessed it, in the rain!  But the huts were dry and we could sense the porters were also very happy to be "home" and we were "half way" in just 2 and a half days.

Day 4 - as we step off at first light again, a first for me - Kila informs me that the wartime "Mission Ridge" track is open and we are heading that way.  Excitement of being privileged to be able to use this little used track soon turns to a few WTF moments as we are sliding on our back sides down near vertical hills using tree roots and vines as ropes!  10.30 and we're at Brigade Hill where we pause for an early lunch and another poignant service paying our respects to Charlie and 95 of his mates who made the ultimate sacrifice on this hallowed ground. I was continually doing "timing estimations" in my head to ensure we made camp before dark and was keen to get down Brigade Hill to Menari ASAP in the hope that we may be able to push onto Agulugo in the swamp, but the long downhill was against us and just to make my decision complete, just as we were leaving the creek (Damien Parer plaque) up to Menari, the heavens opened again with a downpour which rivaled night 1 - so that was it, we're camping at Menari! Thankfully the rain only lasted an hour or so and we were able to enjoy being in camp in the early afternoon. 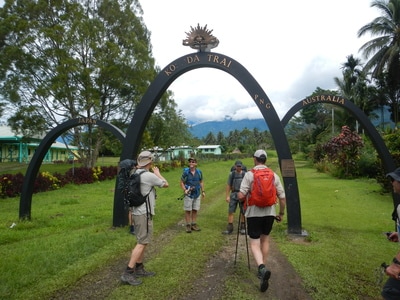 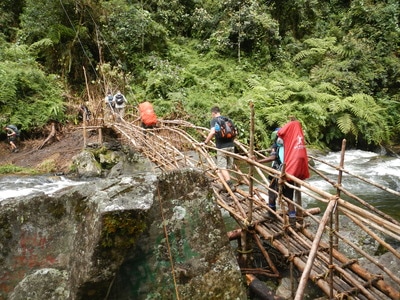 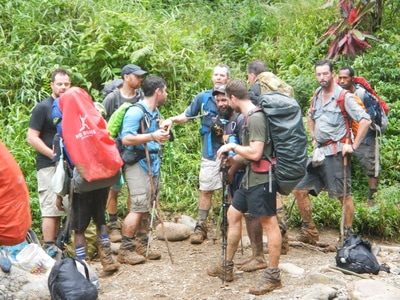 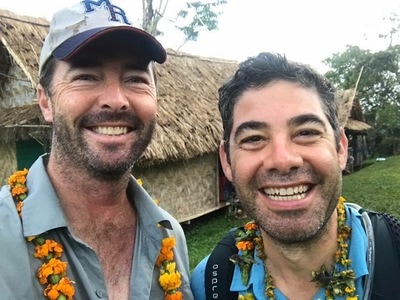 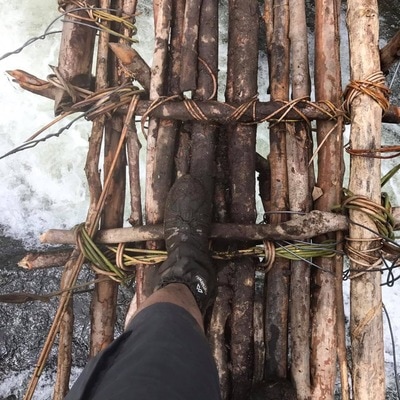 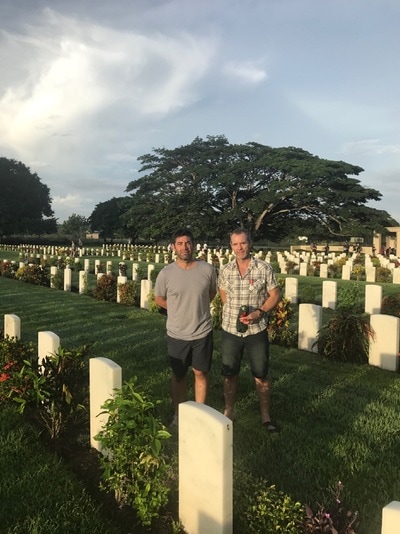 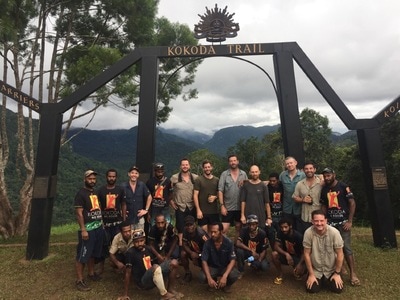 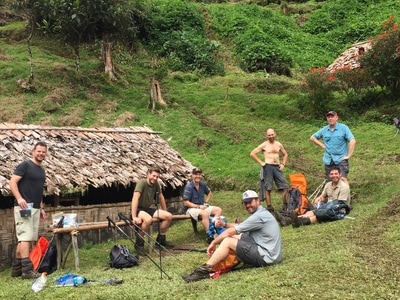 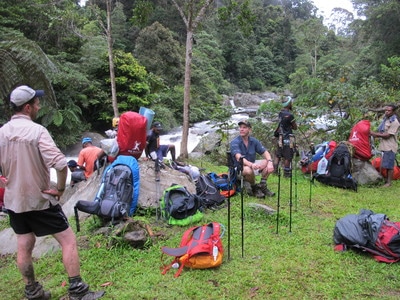 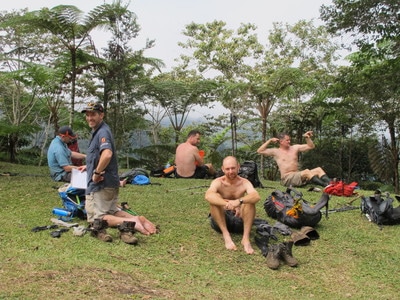 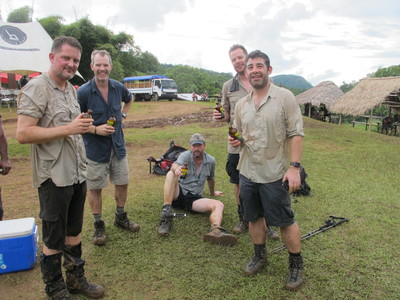 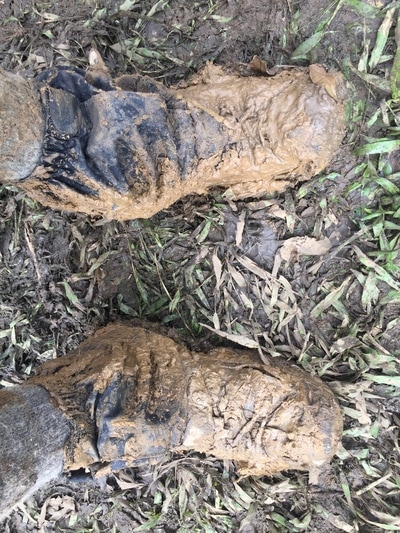 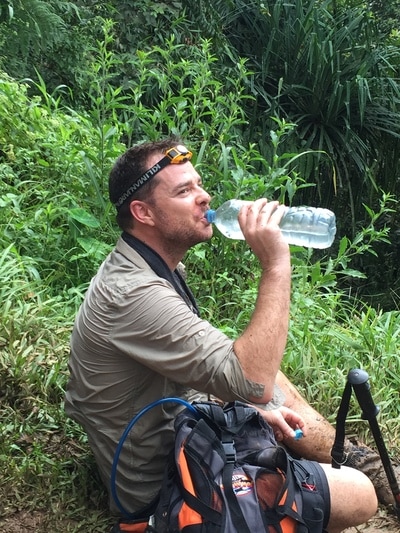 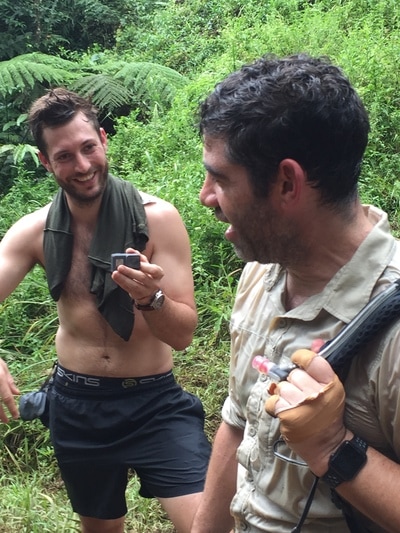 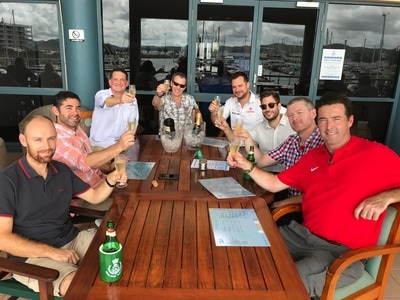 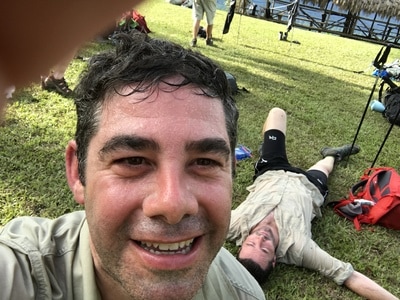 Day 5 - Menari, through the swamp to Ofi Creek.  Another early morning, we hit "The Wall", get our first "taste" of the swamp and before long are at Brown River where we have our first encounter with about 100 other trekkers heading the opposite way to us and we are all log jammed at the river crossing.  We take a number, eventually get across, wet boots and all and continue ploughing straight through the swamp - those first couple of days of skirting around small mud patches to keep our boots dry are a distant memory as we know we will have thick mud and wet boots to the finish line so you may as well charge straight through.  New Nauro for lunch is a bit daunting as it is the usual "camp spot" for the 8 day treks - but we have another good 4 hours to go up the false peaks of the Maguli Range.  Being out of communication range, we had to make do with an amazing "phantom race call" from Ollie as his horse "Wazzenme" came from mid field to mow them all down at the finish line!  Hoping against hope we could get to Ofi and then push onto Ioriabawi for the night was soon dashed as the mud coming down Maguli to Ofi was out of this world which slowed us all down and the old aching knees were quite happy to call it a day as we "swam" / lounged in Ofi Creek - just before the rain came again!  A beautiful camp spot and we can't believe it is our last night already, the last remaining bourbon, whisky, spiced rum is shared around as the tall tales and laughs continued after dinner.

Day 6 - ANZAC eve and we're doing Ofi to Owers or bust! Mud, down hills, mud, aching knees, hips, backs,etc etc, we cross the Goldie River - and by 2.45 pm we finally breach the arches at Owers' Corner and in doing so have completed Australia's greatest pilgrimage and one of the toughest treks in the world.  My sincere thanks to the amazing No Roads support crew in Australia and PNG who make this all possible.  And finally, to Paul and Nathan (the 53rd), Pete the Pom, our Doc from QLD and  JB, Ollie and Nick (the mighty 39th), thanks guys, you made my job so easy and with an ANZAC Day now forever etched in PNG folk lore - forever, My Band of Brothers.

Hadyn
See you at the Top!