​Hello again, we’re just back from our 3 – 13 October 2016 trek.
​
We were just a small group of 4 trekkers plus myself and the porters.   We did have the pleasure of spending the first couple of days with fast trekker, Rufus.    Rufus joined us pre-trek at the Holiday Inn and stayed with us until Deniki before scooting off into the distance with Simon and Ian.   We were all sorry to see him go.

Our group consisted of Paul, Jeremy and a couple of close mates named Nick and Chris.  Our porter group contained Noroads heavy hitters, Local Guide Nelson, Lead Man Lexn and Master Chef Frank. I mean absolutely no disrespect to any of our wonderful porters but you’d be forgiven for thinking this particular bunch was handpicked by Pete Miller for one of his own treks.  Oh, that’s right, Pete was originally going to take this trek.

Our little truck ride from Popendetta to Kokoda was a breeze.  We had cushions on our bench seats, room to move around and those new bridges along the road make things so much easier. As usual we met up with our Porters at Kokoda and I was happy to see Lexn was our Lead man.  I did a trek with Lexn a few years back and the trekkers were so impressed by his physique and very tight fitting Queensland Maroon’s Ruby Shorts, they nicknamed him Sexy Lexy.  It seems Lexy enjoys that title because he introduced himself to our current group simply as “Sexy”.  By the end of the trek no-one knew him by any other name.

I have to admit I was initially a little intimidated by Paul.  He’s a retired school teacher from S.A., and extremely experienced in orienteering and rogaining.  Aside from his very strong physical prowess, Paul is a sponge for knowledge and a walking encyclopedia of Geology, Geography, Flora and Fauna to name but a few of his passions.  Throw in a strong knowledge of the Kokoda Campaign and I felt there was probably very little I could tell him that he didn’t already know.  But he was very kind to me and graciously allowed me to have my say.  I reckon I learned a lot more from Paul than he got from me.

I think as a group we were all very proud of Jeremy and his determination to conquer the track.  He is a big guy with a big ticker and he put a lot of thought and preparation into his Kokoda Trek.  There is no question that he was ready to meet the challenge.   His aerobic fitness was incredible and even when he was struggling, it only took him a minute or so to recover and set off again.  I found inspiration in Jeremy’s attitude and commitment.   He really seemed to enjoy the entire adventure and told us lots of stories about his beloved South Sydney Rabbitohs.  Go the Storm!!!

Nick and Chris were the young one’s on the trek and it showed.   They were both constantly right up Sexy Lexy’s bum and it’s really difficult to split them for the Kleenex Award.  I’ll go out on a limb and say Chris wins by a whisker.   These two blokes really thrived on the track and their treatment of the porters was unprecedented.  They were so kind to the porters and never stopped giving them gifts.   It must be noted that Nick did bring along enough snack bars and lollies to feed the entire population of Port Moresby for a month so I guess it’s no surprise he needed to jettison a bit of weight from his pack.  Anyway, the porters were extremely grateful.  The fact that these two carried so much food with them didn’t stop them from sampling local produce.  At Efogi, Chris purchased the biggest Avocado the world has ever seen.  It cost 5kina and our fears it may taste a bit sour were proved wrong.  It was absolutely magnificent and big enough to provide lunch for us all. 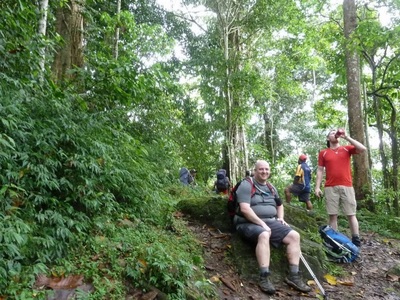 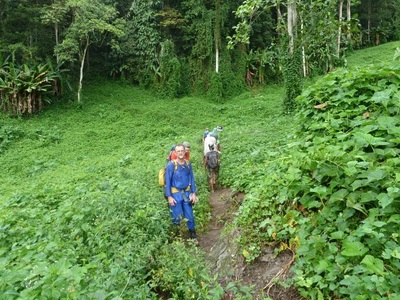 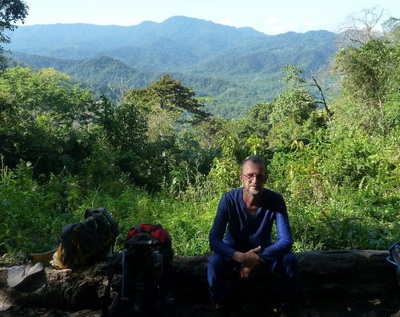 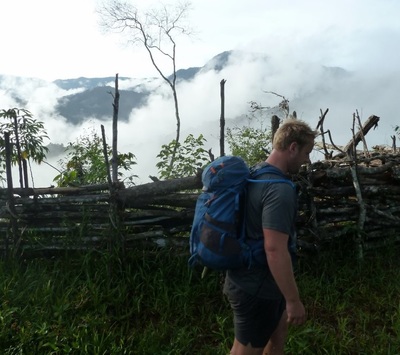 Trekking conditions were extremely favorable and we didn’t encounter any day time rain whatsoever.   In fact it only seemed to rain from 9.00 pm to 1.00 am just to freshen things up for us.   The track was so dry that Paul, Chris, Nick and I didn’t use walking poles at any stage of the trek. That has to be a first.  We had mainly sunny conditions each day and didn’t even have to contend with mud in the swamp.    Our Sabbath was a sunny day spent relaxing in Kagi.   We all headed off to church in the morning, had a nanna nap after lunch and sang with the kids in the evening.

We didn’t have a single episode of illness or injury issue among the trekkers for the entire trek.  Although I did manage to scratch my head on a low hanging shelter after the trek at Ower’s Corner and Chris needed a band aid when he cut his toe on the flight from Brisbane to Melbourne.

I have to make special mention of Frank and his cooking.  Noroads camp food is always exceptional but Frank took it to new heights.   Every lunch and evening meal was perfect and I doubt anyone lost weight on this trek.

Congratulations everyone and thanks for your friendship.  I had a seriously fantastic time and hope you did too.    This was a great enjoyable trek with a great bunch of blokes.   Our porters were sensational and the interaction between trekkers and porters was the best I’ve ever seen.