Day 1 – Arrival in Port Moresby
Our trekkers arrived safe and reasonably well at Jackson’s International Airport with several trekkers (no names supplied) indulging in some inflight service and by all reports boosting the  Qantas share price in the process!

Despite a dishevelled start, all were in great spirits (sorry…no pun intended) and we travelled to the beautiful Holiday Inn Hotel to prepare for our adventure, discuss the next day’s arrangements and generally soak up the amazing PNG atmosphere.

Day 2 – Port Moresby to Deniki
An early rise was arranged to meet our scheduled Popondetta flight with everyone being excited about the next 9 days on the Kokoda track. Have we done enough training? Do we have the right equipment? Do I wear gaiters today and can I wear my red track suit top being some of the questions circulating the group.

Our flight to Popondetta started with poor Lucy being seated in Economy Class with everyone else being accommodated in First Class for the 35 minute flight to Girua. No drink service much to the dismay of several trekkers!

The road trip to Kokoda was the usual bone jarring, bladder shaking journey with everyone glad to make it to our starting point Kokoda and commence the 3 hour walk to our first night stop at Deniki. Packs on and we started our walk in good weather however once we reached Hoi, light rain started to fall making the ascent slippery with Andy taking an early tumble in the creek and almost taking his personal porter with him. We made Deniki safely however Andy was still struggling to find his ‘track legs’ and had three more falls around camp (including two pretty much at the dinner table!!). A beautiful meal was enjoyed by all for John’s birthday (Happy birthday mate) and then everyone was off to bed listening to the rain continue to fall.

Day 3 – Deniki to Alola (via Isurava battlefield)
An early rise at 5.00am (someone did stir at 2.00am thinking it was time to get up!!) with all trekkers starting the processes of waking up, packing gear, eating a good breakfast, brush the fangs and generally start to loosen up the body for today’s trekking. Today is the day where we walk through the beautiful Choko Fields and visit the Isurava Battle site to pay our respects to those soldiers of the 39th & 53rd Militia Battalions and the 2/14th & 2/16th AIF who paid the ultimate sacrifice at or near this location. After a moving service at the memorial, we pushed on to see ‘Con’s Rock’ and then to our evenings camp site at the beautiful village of Alola. Again another awesome meal was enjoyed by all and despite the trekkers nearly burning the meal hut down, we all retired early for the night, listening to the rumbles of thunder and the patter of rain.

Day 4 – Alola to Dump No 1
Before 5.00am rise thanks to the local alarm clocks (thanks Alola roosters!!!) and after the usual morning routine, we started the very slippery decent out of Alola with everyone taking their time and being cautious (even Andy!!). We arrived at the Japanese Gun position overlooking Eora Creek in good time then continued on to Templeton’s Crossing. After a nice break, we pushed onto our evening camp site being located at Dump Number 1 where we enjoyed a nice bathe in the cold waters of the Eora Creek. 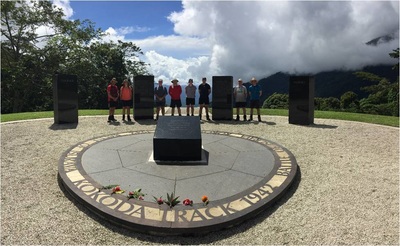 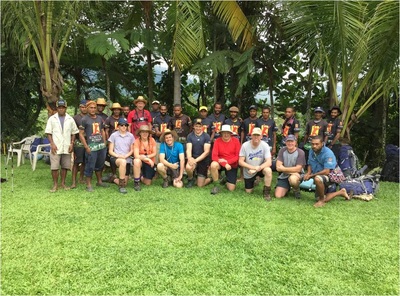 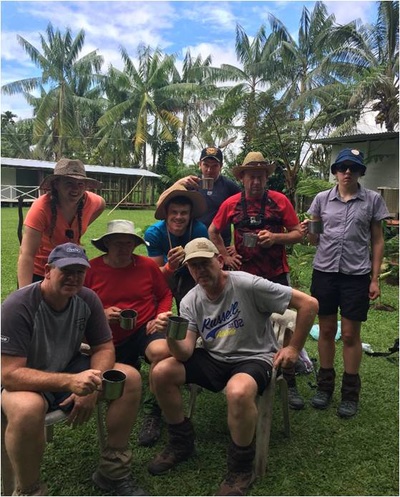 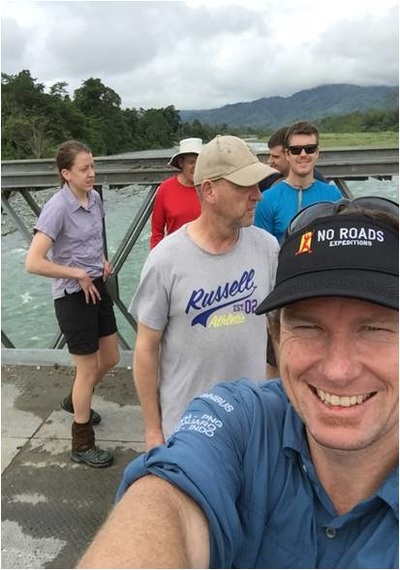 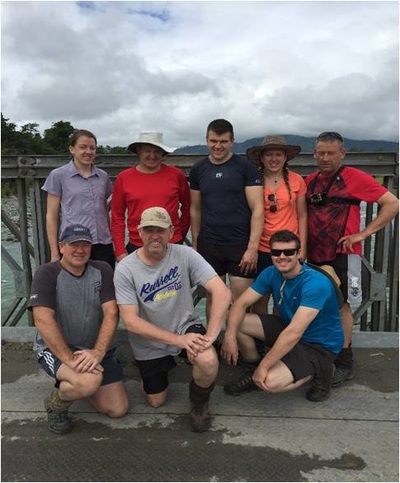 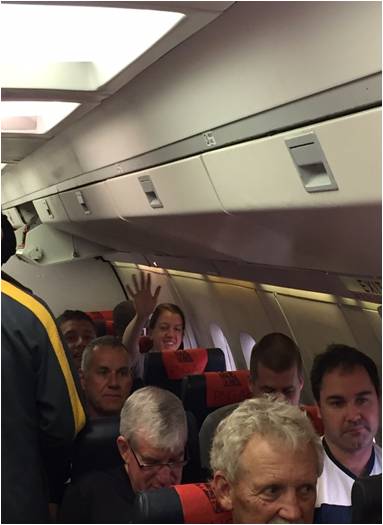 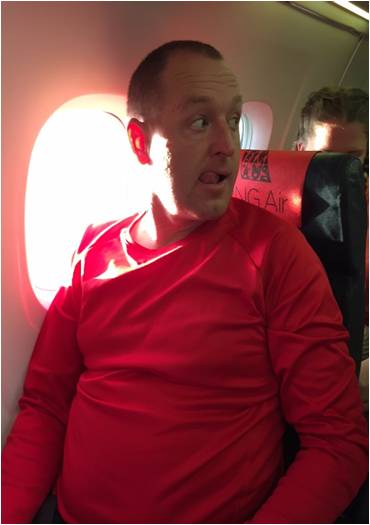 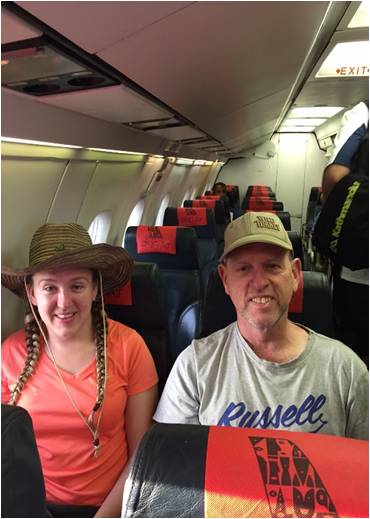 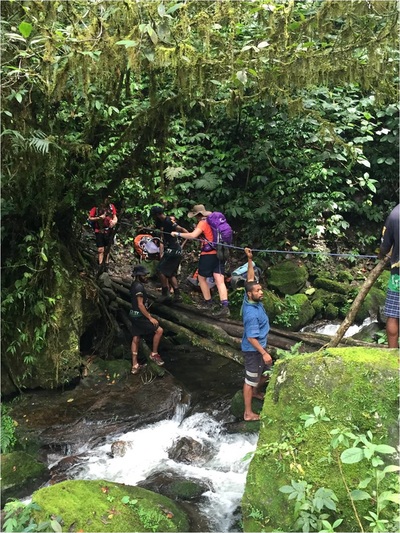 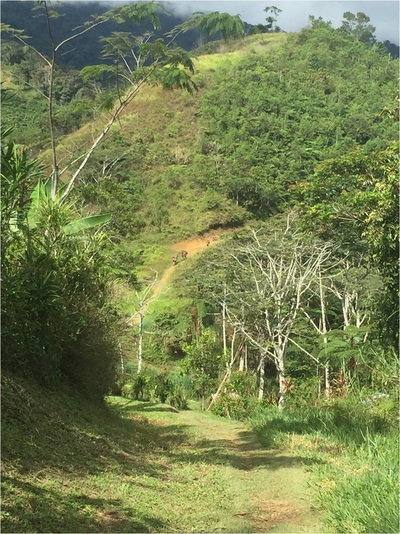 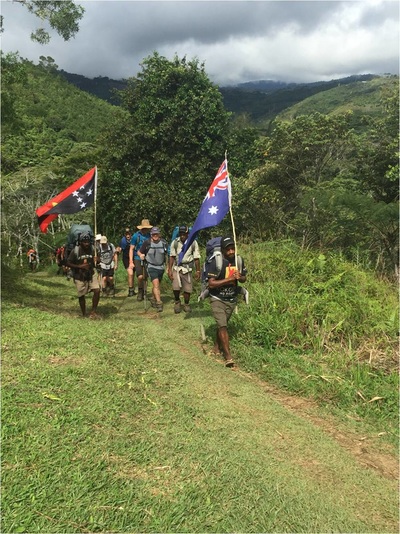 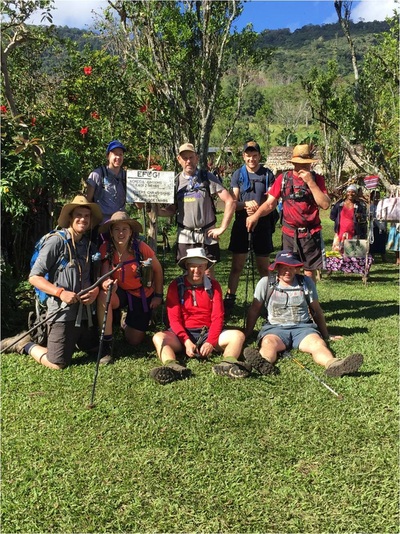 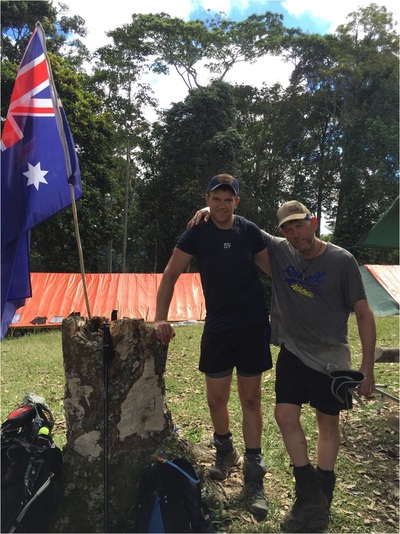 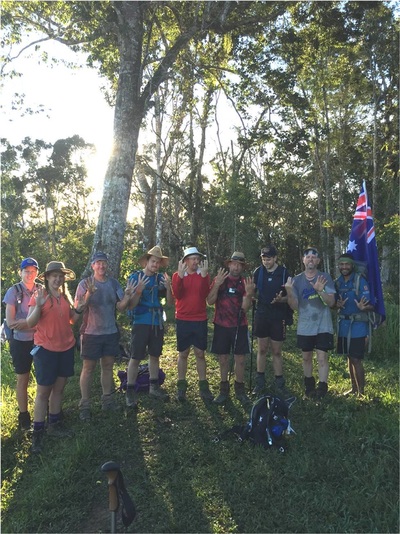 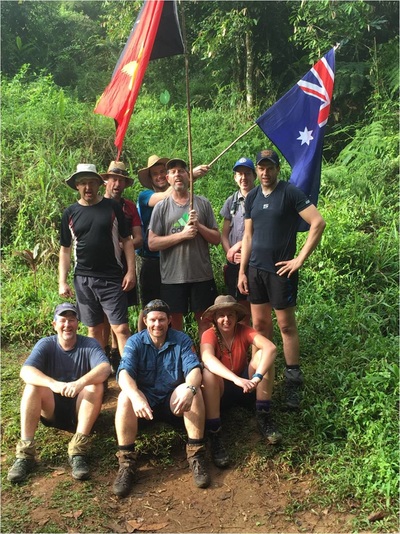 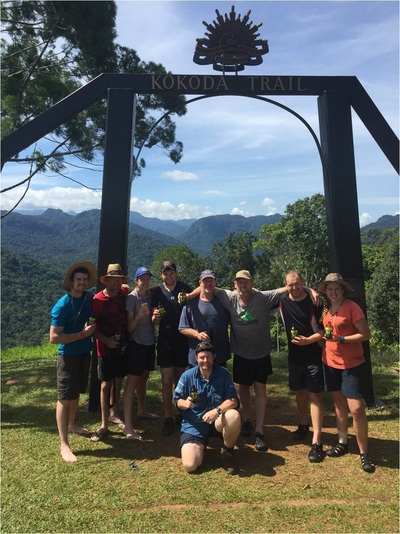 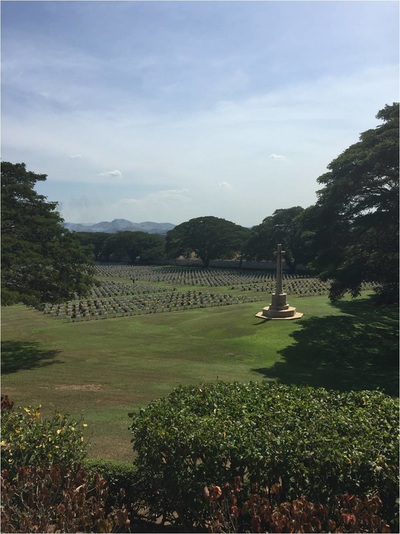 ​Day 5 – Dump No 1 to Kagi
Everyone especially the porters were up early to start this big day which will end in their home village of Kagi and the reunion with their families. Breakfast consisted of a nice porridge drowned in Honey & bananas for some otherwise those who didn’t partake still had the choice of Banana pancakes, Cornflakes & Weetbix’s washed down with a strong PNG plunged coffee or tea. After filling our bellies, we started with a nice incline out of Dump 1 which if you weren’t awake…you certain are when we reached the top!! We climbed over the top of Mt Bellamy (2200m) and experienced the beautiful ‘Moss Forrest’ where huge Pandanas grow and the moss is phosphorescent at night. A detour to visit the treeless landscape of the Myola Lakes where in 1942, the allies were air dropping supplies and the wounded were briefly able to receive medical attention. The walk towards Kagi was only interrupted by lunch and when Ben stepped on something metallic which ended up being a fully loaded Bren Gun magazine. All were amazed that it took 74 years to find the surface again since being dropped (perhaps by a digger) back in 1942!! Our arrival in Kagi was amazing, met by the local women & children who presented handmade Lei’s to the trekkers and we stayed at Gerri’s camp, immediately requesting as much Coco-cola as possible from the local ‘shop’. Tomorrow would be our rest day so everyone was in a relaxed mood, enjoying the popcorn, soft drink and dinner presented.

Day 6 – Kagi Rest Day ‘Sabbath’
Today we had a nice sleep in with everyone getting up around 6.30am for breakfast and generally to experience a relaxing day. The sun was shining as most trekkers took the opportunity to do some washing, dry the clothes and attend to some minor aches & pains. We had the opportunity to attend the morning church service with the Kagi Villagers which ended up being an amazing experience (even Bruce liked it) and straight after that, Karsman took us to the nearby school at Kovolo to see the facilities and also talk to Michael, the local school teacher. Paul made the fatal mistake of ‘not raising his hand’ to ask a question and was punished for his insubordination (thanks Andy for dishing out the punishment). After the school, we arrived back at Kagi to check our washing was drying, reflect on our adventure so far and rest. In the evening, we were privileged to have the local villagers call up to our campsite to sing for us before dinner.

Day 7 – Kagi to Menari (via Brigade Hill battlefield)
After the day of rest and recuperation at Kagi, we received a fond farewell from the local villagers, who’s husband’s & sons continued to assist us on our journey over the Kokoda Track.  Our pace was quick, reaching Launumu (aka Efogi 2 on the hill) in no time, stopping there to talk about Kokichi Nishimura and also take the opportunity to buy some locally made Bilum Bags, get some more coke and devour those sweet finger bananas!! We continued from the heights of the ridge down to the village of Efogi 1 where after another quick break, started the long hot climb out in the open Kunai grass up to Mission Ridge where the gallant 2/27th battalion from South Australia briefly held the Japanese army at great cost. With the Papuan & Australian flags flying and with great reverence, we walked past the 2/14th & 2/16th positions up to Brigade Hill where on the 8th September 1942, the gates of hell were opened. Here we held a memorial service, to pay our respects to those 101 Australian soldiers from the 2/14th, 2/16th & 2/27th who paid the supreme sacrifice. Ben, Lucy, John & Georgina reading poems to pay tribute those men. We left behind the bees of Brigade Hill and commenced the long, steep, knee destroying decent to the Vabuiagi River, then onto our nightly camp at Menari where we were entertained by the roosters.

Day 8 – Menari to New Nauro
The Menari roosters were in real danger of being cooked for breakfast this morning as at approx. 3.00am, they started their wake up call. One would go, then set off another, then another, then another until all 120 roosters (not quite but did seem a lot) were having a go!! After breakfast (not rooster), we started a relatively ‘short day’ at 6.30am knowing we had a steep ascent followed by a slippery descent down ‘The Wall’ to the ‘Swamp’. We reached the Brown River where our skills of balance were put to the test crossing via a series of logs with everyone successfully crossing despite some rocks being thrown! A brief swim then we tackled the remainder of the swamp, finally pushing up the hill to our camp located at New Nauro just after lunch. The early arrival allowed for clothes to be dried and bodies to be rested before the next big day of trekking. It was here that Bruce achieved his 100% accreditation by sleeping in a tent for the first time this trek.

Day 9 – New Nauro to Ua-Ule Creek (aka Reuben’s camp)
Everyone was up early this morning, ready for a big days trekking where we would cover over 15km of ground and ascend 570m but loose over 1050m from the peak of the Maguli Ranges (1350m). The rest from the previous afternoon had everyone in good spirits and with lots of banter being made of who will race one of the porters up ‘Imita Ridge’ the last day…Lucy being the favourite. The long climb up to the peak of the Maguli Range sapped everyone’s excess energy then came the steep decent down to Ofi Creek where we rested for morning tea. After a brief rest and then pushing up to Ioribaiwa Ridge where the thrust of the Japanese force was to grind to a halt, we continued down to Ioribaiwa Village itself for a welcomed break and lunch. After our fill, we then push on with no less than 9 creek crossings to Ua-Ule Creek where I had promised a wonderful swimming spot and hopefully more cans of coke! A big day it was with a very welcomed swim in the creek, big dinner then off to bed to attack the final day!
Day 10 – Ua-Ule Creek to Owers’ Corner
No need for any roosters today with all up early and focussed on finishing the trek strong…especially Lucy who by now was a confirmed starter for the Imita Ridge Handicap! The morning routine of waking up, packing the gear, eating a good breakfast and brushing the fangs has been honed to perfection with all eager to get going. The main topic of conversation was what you were going to eat when back in the real world with suggestions of Lamb Roast, Big steak, Meat Pie and Hamburger being met with a buzz of approval. We reached the starting point of the Imita Ridge Handicap and took a brief rest. Lucy looked ready to go however the challenger from the porter ranks didn’t materialize, so with some level of relief (perhaps wisdom), the race was postponed for another day. The climb up to Imita Ridge was energy sapping with all drawing on every bit of willpower to get to the top. At the end of that hour and with a huge sigh of relief, we sat our tired bodies down for a well-earned break. We then continued the slippery downhill decent to the Goldie River, a quick swim then set ourselves for the final push up to Owers’ Corner where the last 200m is absolutely soul destroying!

At approx. 12.05pm…on Wednesday 15th June 2016, eight Australian’s…brothers …sisters….all mates finished a pilgrimage of what is called the Kokoda track.

A big thank you to Bruce & Lucy for organising the group and to Andy, Jeff (George No 1), Paul, Ben, John and Georgina (George No 2) for providing so many laughs & great memories.