We’ll call this the Homicide Squad Group.  It was essentially brought together by a couple of Homicide Cops Jason Wallace and Shane O’Connell.   What we ended up with was 10 trekkers, 9 of whom are cops and a guide who is also a cop.  The only non-cop was Doctor Yeliena Hill who is significantly raised the IQ of the group.  It’s okay, I’ve already used that gag with the group and got a laugh.

We dedicated this trek to Jason.  He’s always been a supremely fit and healthy individual but a couple of years back he was struck down by illness and was gravely ill.   The illness necessitated a liver transplant and you would think many of his plans and life goals would be the furthest things from his mind.  Well, not necessarily because he seems to have used those things as inspiration along his long road to recovery.   And recover he has.  Jason made pretty light work of the Kokoda Track and in fact he won Bazza’s Kleenex Award for spending most of his time (probably 98% of it) right up (Steve) the lead man’s bum.  As athletic as Jason is, fleet footed he isn’t.  When Jason wakes up in the middle on the night to go to the toilet the whole world gets woken up to join him.

Now, at the other end of the Conga Line was Sol Solomon.  He was the elder statesman of the group although the truth be known he only has me beaten by a handful of years.   I don’t think Sol would mind me saying the first couple of days were a bit of a struggle.   He was heard to say, “I wish I’d done a bit more training”.   The comforting thing was that I also heard him say “I’d have to die or lose a leg to not finishing this”.  Yeliena who is a Forensic Pathologist seemed quite happy to perform an amputation if necessary but we managed to contain her excitement. In the end Sol displayed enormous determination and a big ticker and got stronger every day.  He had some great support at the back of the line and I know he is very grateful to those who hung out with him.  Kerrie Hick’s spent a lot of time getting to know Sol and Tina Dodemaide, Sarah Woods, Miranda Stubbs and Yeliena were frequent visitors.  There was also a large rooster which followed us the whole way from Alola to New Nauro.  Sol also had one of our porters, Asaiah as a constant companion (except on the Sabbath) and they became a great team. I wonder how Asaiah would have gotten on without Sol.

The boys, Jason, Mick Warwick, Pete Brezing and Shane (order of march) kept things moving up the front although at one point very late in the trek, Tina violently forced her way to the front relegating Jason to second, if only briefly.   Fortunately this brazen act only caused a couple of minor pride injuries. It was a real credit to Shane that he spent all that time at the pointy end of the group.  I know only too well that it requires a bit extra training and preparation to keep up with the young one’s.  Shane put in a lot of pre-trek work and it paid dividends.  He never missed a beat and was able to take in and enjoy everything the trek has to offer.  He also celebrated his wedding anniversary on day 6 and managed to get a phone call through to home.  Lots of brownie points!!!!   Mick and Pete were extremely strong trekkers. Mick had a big heavy looking pack but never complained or slowed once.  Pete mentioned a few times that he should have done more training but he performed seriously well.   These blokes still had the energy to throw a frisby around at morning tea and lunch stops. 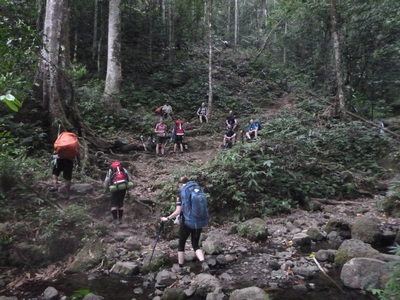 The track itself put on the driest conditions I’ve ever experienced and while that made progress a little quicker, the dry hard ground certainly took a toll on our poor feet. I continually promised mud but it didn’t eventuate and destroyed my credibility. Despite everyone taking good care of their tootsies by placing a light smooth even coat of Vaseline on their feet each morning, some still presented with nasty looking blisters.  At the end of day three I actually asked Yeliena to amputate my left little toe.  She was keen but I sought a second opinion and decided it was salvageable.   I have to stop talking about Yeliena like she is some type of crazed psychopathologist.  She is absolutely wonderful, a great team player and the best company you could ever ask for on the trek.  She really seemed to love the Kokoda experience and enjoy the company.   When we played the animal / alphabet name game she was reeling off animal names I’ve never heard before so I’ve made notes and will be googling them.   Sol also told us about the dog breed “bagel” and that a soldier ant is in fact a type of ant.  Thanks Sol.

We ate exceptionally well on this trek.  There is always an abundance of food on a No Roads Trek but there just seemed to be so much more this time.   Ruksy was our cook and he did a wonderful job.  While we are on the subject of food I just have to mention Mick. I admit I’m a bit frugal when it comes to our food supplies and tend to ration and manage distribution.   Mick really tested me out because he eats Vegimite like a kid eats ice cream.  Actually, kids don’t quite heap their ice cream quite so high.   Initially I had a lot of trouble coming to terms with this but relaxed, underwent a bit of therapy and  realized the stocks of Vegimite were going to last…just!!!!  I was also worried about the sweet biscuits and often had to hide them from Kerrie.

Kerrie likes to record things for posterity and has plans to compile a book which will include photos, track facts, poetry and quotes from our group.  Of course a lot of the quotes will be the silly comments made in moments of madness along the track.  Sorry Sol but that means you’ll be very prominent and the rest will be relegated to co-stars.  I really hope Kerrie made lots of notes about the very funny comments made along the way although some of the comments may be left on the track.  This was one hysterically funny group and Kerrie is no slouch in that department herself.  All of the girls are so funny and Jason’s sharp wit is a solid match for the best of them.  As for Tina, well I mentioned at the post trek dinner that not only can she talk under water but she can also talk incessantly while completing Category One Climbs.

We had an interesting meeting with another group going the other way.   I won’t mention the name of trekking company, Adventure something or other.   Anyway the burly alpha male types in that group were astounded to see our trekkers carrying full packs the entire way.  What’s more, the other group who were on day 2 of their journey had lots of advice for our 6 day veteran’s.  I wont repeat the words we used to describe them.

On the subject of packs, I noticed Pete had an unusual set up.  I’ve known Pete for a while and he was using one of my old back packs.  While I could have loaned him a pack cover too, he decided to go out and buy one.  I think they sold him an Australian Army Mess Tent instead.   What was going on with that thing Pete?

Camp life was most enjoyable but there was definitely a rivalry between hut people and tent dwellers.   There was Sol and his angels who preferred the tents and Sarah and her thugs (myself included) who much preferred the huts.   Miranda dabbled in hut life but the appearance of the world’s largest surviving prehistoric ”cockroach” on her sleeping bag tipped the tables in favour of a tent.  After close inspection it is my view the beast was a slightly oversized cricket. Miranda had the added fright of coming torch light to torch light with Jason when they both decided to go to the toilet at about 2.00 in Kagi so it was inevitable she would defect back to the tents.

Sarah was a real asset to hut life and not just because she had the foresight to bring along a little drop of Grandfather Port. She is just so funny, strong and independent and brought a female touch to our home, kept the boys on their toes and does flexibility exercises we could only marvel at.  Not that we were looking!!!   Sarah’s pack looked so big and heavy and I decided not to weigh it for fear of making myself feel inadequate.  We enjoyed having you as our hut buddy Sarah.

A big thanks to Clement and Porters for the exceptional job they did.

Thanks everyone for letting me be part of your trek.  It was an absolute hoot and I’m still on high.

Cheers,
Kokoda Expeditions with No Roads