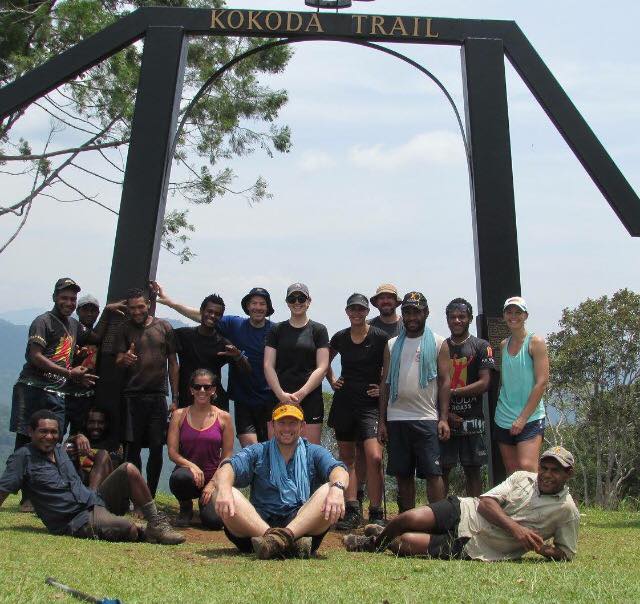 Team "Buggerrup"
Is there such a thing as a cursed trek??

This was a question on everyone’s lip’s as we sat beside the PMV watching the third flat tyre being changed for the day and still being 20km from Kokoda!! Whilst some relief would have been welcomed from the ‘Chiropractic Express’ (and Simon’s Kidneys!!), there was a sigh of relief when Kokoda came into view by all!!

Our team consisted of seven being Simon (Adelaide’s own No.1 business entrepreneur, former Master Chef and not to mention PNG born)…perhaps not quite up to the standards of our own Kokoda Master Chef Ben…Rob, the oldest on the trek however also a part time ninja & business owner, Renata…the best Captain in the Australian Army and as tuff as an Armoured Piercing round..Kate…EMD nurse and owner of cursed crazy pants (which did get put away after a spill)…Eliza…also EMD nurse and curse magnet…Maude…our French/Canadian correspondent of World Banking from the Solomon’s and Natalie…Deniliquin’s own super mum who amongst other things had a unique ability to look like a supermodel and not sweat for the entire trip!!

Day 1: (Girua Airport to Hoi) “The PMV from hell”.
Very dry conditions made the road from Girua to Kokoda very rough and coupled with three flat tyres (one spare), we managed to limp into Kokoda to start our amazing trek. After a brief tour of the Kokoda battlefield and visit to the Museum, our group selected first gear and started the pilgrimage up the track…our destination being the beautiful village of Hoi. Quick swim before nightfall, a fantastic meal and then early bed…everyone contemplating what’s in store for the next 7 days!! 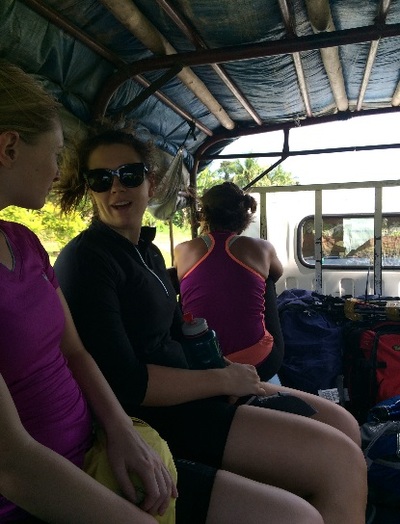 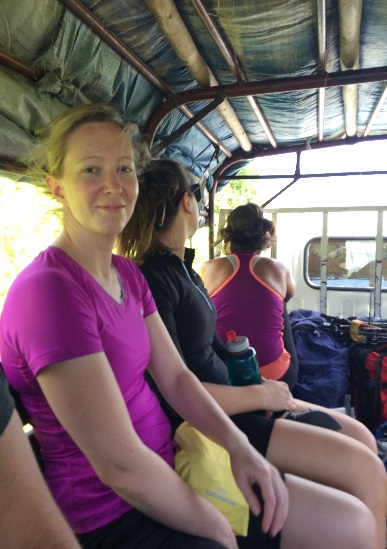 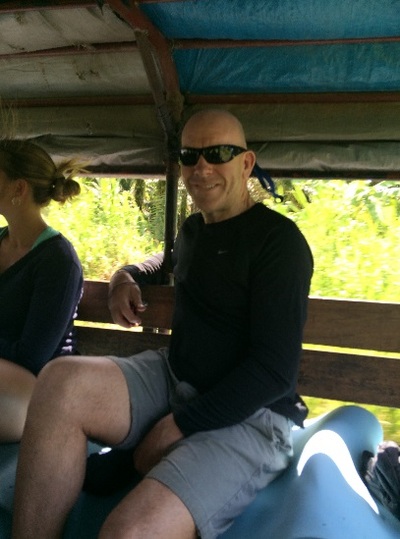 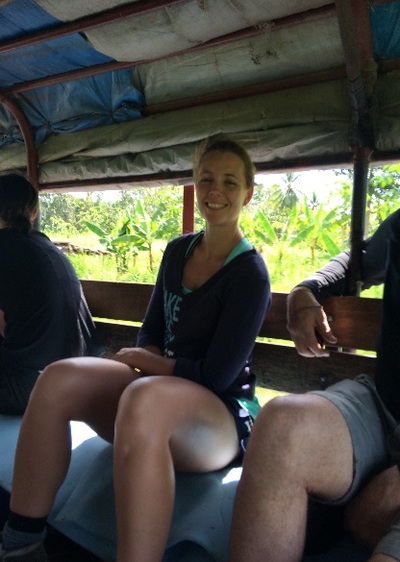 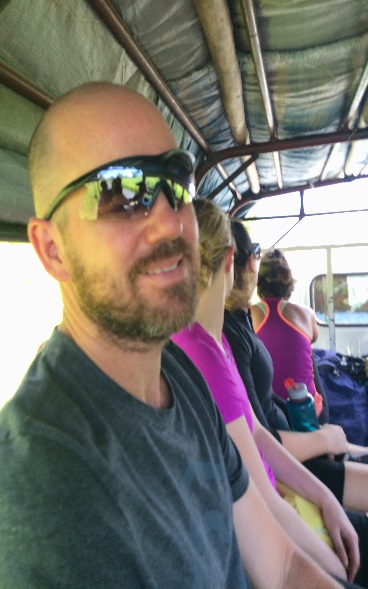 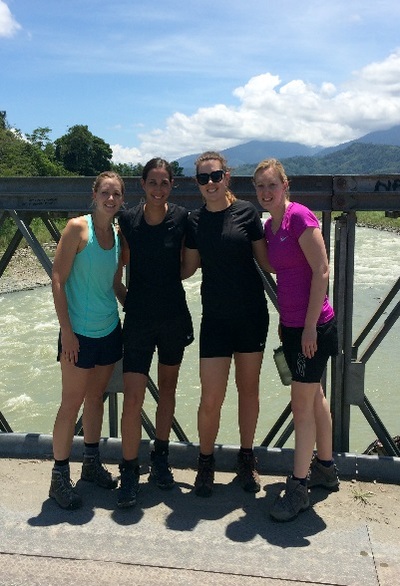 Day 2: (Hoi to Alola) “The day of the Curse”.
Everyone was up early at 5.00am, prepping for the initial tough 45 minute climb up to Deniki then onto to Isurava Memorial where the plan was to stop for lunch and hold a beautiful memorial service. ‘Courage’, ‘Endurance’, Mateship’ and ‘Sacrifice’ engraved on those four black pillars standing silently on guard over the battlefield that 73 years earlier was the scene of a desperate & determined stand by the valiant 39th & 2/14th battalions.

The trek curse hit with full fury when one of our trekkers became ill which required a medi evacuation to Port Moresby via helicopter. Our Head Local Guide Clement and those present swung into action which required the clearing of an evac site out of the jungle and the arrival of local villagers from Hoi ensured that a site was cut & accessible within a very short period of time. Our ill trekker was airlifted out for medical attention with everyone being sad at the departure of our trekking friend. The group arrived at Alola for a well-earned rest and absorbed the day’s events. 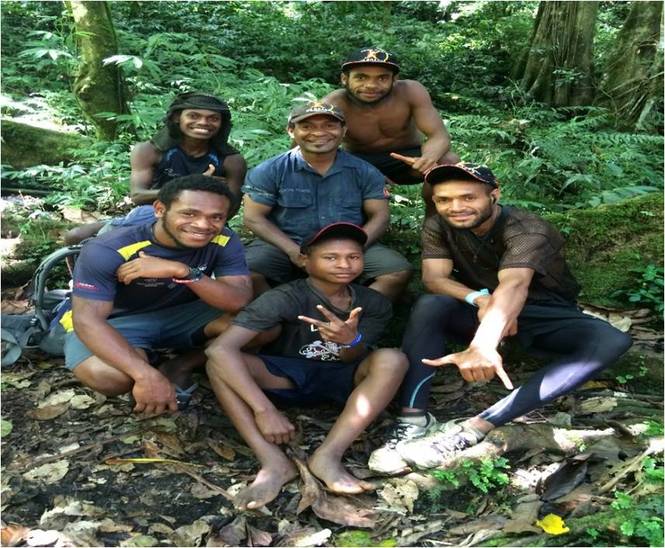 Day 3: (Alola to Templeton Crossing (Dump 1). “The Big Day”.
Early rise again at 5.00am with yesterday’s events still fresh in everyone’s minds but a big day’s trekking to Dump 1 and some rain overnight ensured some early slips and spills. Highlights of the day were the Japanese Mountain Gun position above Eora Creek and a refreshing swim in the creek at Dump 1 (Renata almost getting Hyperthermia!!).

Day 4: (Dump 1 to Kagi).”Maximum Speed”.
Today’s destination is the boy’s home village of Kagi therefore another early rise at 5.00am and early departure was always on the cards. The girls were off like a rocket attacking the big incline like it was entry to a Myer Stocktake sale opening, clearly leaving the boys in their wake!! Only the massive calf muscles of Steve could keep the girls in check and we all ascended to the highest park of the track (Mt Bellamy 2200m) in cracking time.

A short break taken then the easy decline through the Moss Forest and to 1900 camp site for morning tea and a ‘sling shot competition’!! Our thoughts were with our recently evacuated trekker therefore a quick call was made to Australia with confirmation received that all was ok and everyone was relieved. After the break, we continued our descent and arrived in the beautiful village of Kagi, the home village of most of our porters. After setting up camp and arranging a meal, the boys took off to play a much anticipated game of soccer. Simon our group’s designated shin grabber being a ‘sub’ if anyone wanted a rest. The heavens opened up and the dry pitch was suddenly transformed into an Olympic swimming pool, lightning cracking everywhere and despite all of this, the referee was holding an umbrella and the boys played on. All present would agree that this moment was a highlight of the trip. 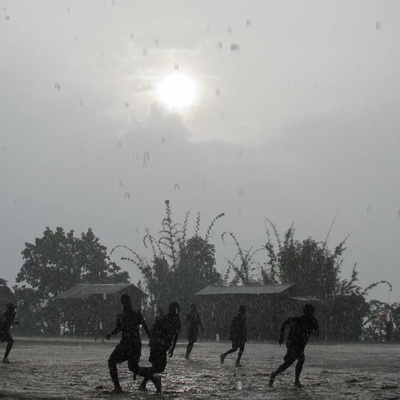 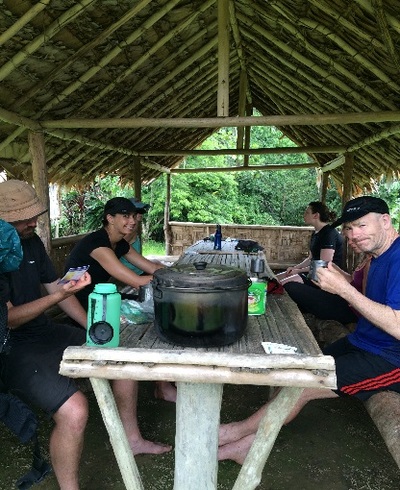 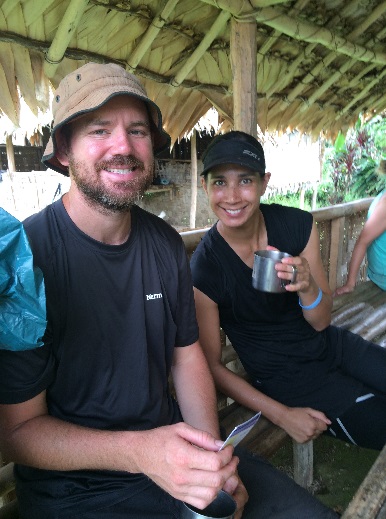 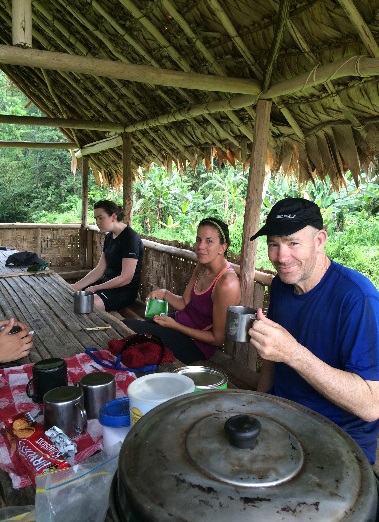 Day 5: (Kagi to Menari) “Goodbye Kagi & the amazing Eco-Toilet”.
After a good night’s sleep being surrounded by a pack of snarling dogs, we rose to the welcoming sound of the village bell being rung at 3.00am…surely the work of some madman or woman?? We bade farewell to the beautiful views of the Eco Toilet and left Kagi with the early morning parishioners providing us with a beautiful rendition of ‘It’s not an easy Road’.

A steep decline to Efogi Creek, brief ‘detour’ to a village garden by Steve, then up past some trees…’were they gum trees??’ A quick rest at Efogi 2 to sample some sweet, sweet pineapple, then the push up to Brigade Hill for lunch. At Brigade Hill, we held a beautiful service to remember the fallen of the 2/27th, 2/14th & 2/16th with Rob & Renata providing emotive readings and Renata reading of the ‘Ode’ certainly being one that I will remember for some time to come. The boys also gifted Simon a ‘billum bag’ to honour his recently departed father who was a ‘Kiap’ in New Guinea. Post lunch was the quad destroying, knee breaking descent to Menari of which all arrived tired but safe. 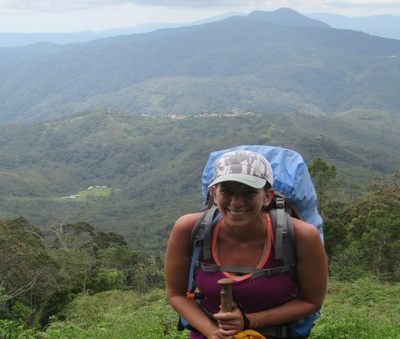 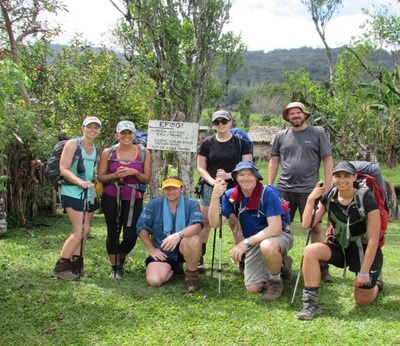 Day 6: (Menari to New Nauro) “The Swamp!!”
Despite today being a ‘short day’, we had a little bit of rain overnight and all we were thinking of the swamp ahead and the treacherous decline down ‘The Wall’. A few slips and falls by most however all in all, everyone managed to negotiate the swamp well and arrived in New Nauro by lunch time for a well-earned rest and drying of clothes. The extra time also allowed everyone to shower in peace & privacy except for Simon who for reasons unknown thought the shower was an ‘open air’ one and not only put on a show in front of our porters but also possibly blinded the local villager & child tending their garden across the valley!!

Day 7: (New Nauro to Ua-Ule Creek) “Nearly Home!!”
After yesterday’s rest, everyone was up early & amped for a big day’s trekking to Ua-Ule Creek. Lunch was held at Ofi Creek with all taking part in a re-enactment photo at the crossing then pushing on through Ioribaiwa Village to our destination of Ua-Ule Creek. Renata’s music & on occasions singing was a highlight despite her not being 100% (reckon it was the swim at Templetons that did it!!).

Day 8: (Ua-Ule Creek to Owers’ Corner) “Thoughts of home & the finish line”
With everyone keen to get going for the day, we packed up camp and were on the track by 6.15am with the end in sight. There had been many nominations for the ‘race’ up Imita Ridge with Simon and ‘superwoman’ Natalie being favourites against one of our porters however sanity prevailed and Imita was scaled not in a race, however in a slow methodical pace of Day 8 track veterans. With Imita Ridge reached, a well-earned rest was taken by all and the summoning of unknown reserves of energy was drawn upon to push down to the ‘Goldie’ and up to Owers' Corner.

A quick swim in the ‘Goldie’ before the final ascent up to Owers’ in the heat of the day with the finish being within arm’s reach. At 12.00pm, on the 28th November 2015, six trekkers completed the Kokoda Track and finished a journey of ‘Courage, Endurance, Mateship and Sacrifice’.

What an amazing group and my thanks to all of you for a fantastic trek and very funny trek. 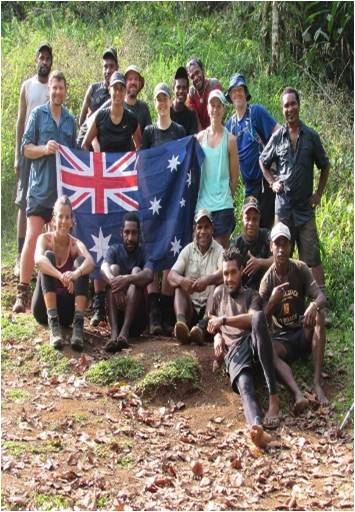 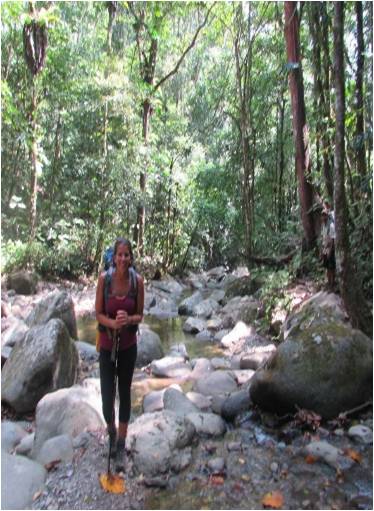 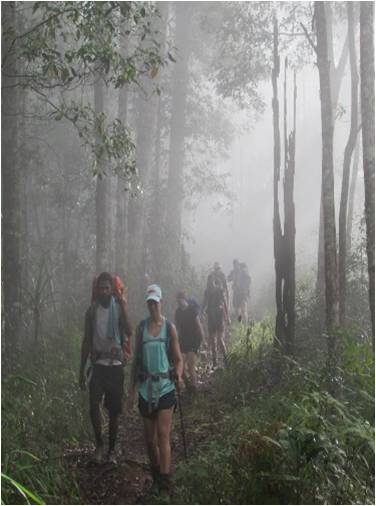 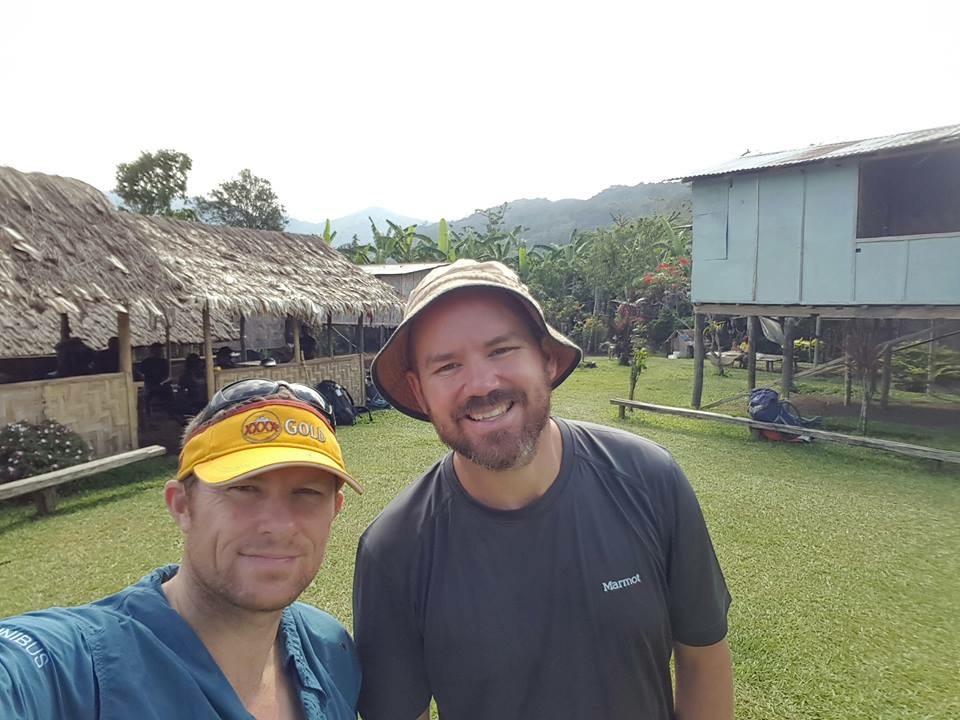