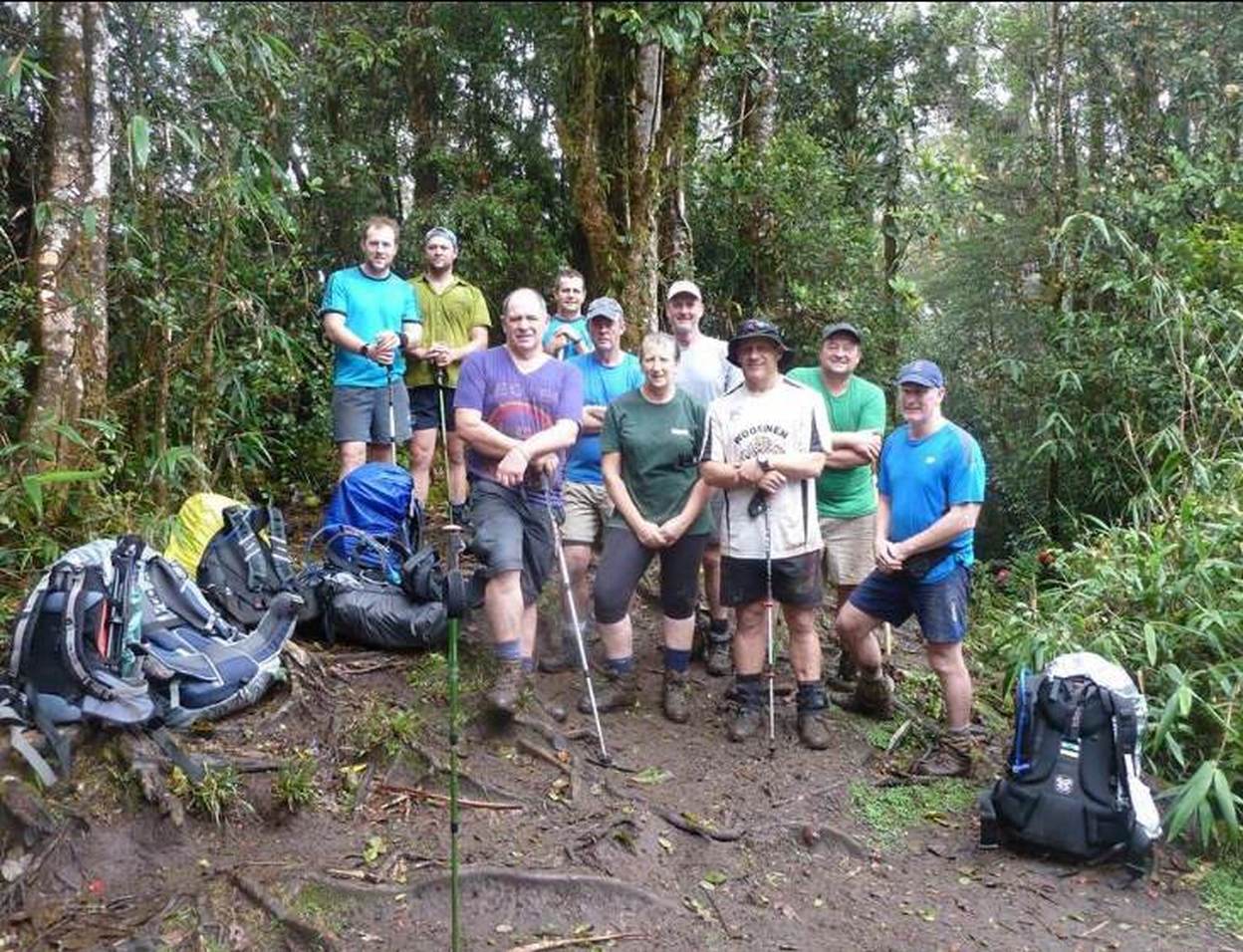 This Trek is known in NRE circles as the “Kiley Group”.   I was recommended to the group by a mate, Peter Kiley who was also one of the trekkers.  In fact we had two Peter Kiley’s (cousins), one from Victoria and one from NSW.  Brenten Hogan was the common denominator who did a wonderful job of bringing ten like minded and supreme athletes together for this trek.  By the time you add me and the porters we have a pretty big group.

Thankfully, we had a nice quiet first night in Port Moresby. Following the very comprehensive pre-trek briefing a couple of blokes tried to corrupt me but I was steadfast in my resolve to remain professional.  That professionalism forbids from naming Seth and Mick.  I’d met everyone except Nicholas and Ben Trenfield prior to heading off to PNG and I was well aware we were in for a fun time.

Once again, Terrence made the process of checking in to Moresby Domestic Airport as seamless as possible.  An over zealous security officer was intent on emptying my carry on luggage and it dawned on me that I was about to forfeit a couple of items which probably should have been in my checked luggage.  As luck would have it the security man was so thrilled with his new “Carlton Mid Strength Base Ball Cap”  kindly donated by Mick, that he’d lost interest in checking my bag.  Either that or we'd become instant best friends.

Very nice views on a very pleasant flight to Popendetta then it was all aboard the truck and after a quick shopping stop in Popendetta we were off to Kokoda.  It wasn't long into the truck ride that the novelty of small villages, river crossings and pot holes began to dull and other topics were on the agenda.  Now, I’ve always rated myself a bit of a footy tragic but I’ve met my match and now realise I’m just an amateur.  Brenten is by far the most tragic I’ve even encountered.  He started playing games like naming players who wore number two and he’d rattle off ten often obscure names before anyone else got a turn.  The Trenfield boys, dad Seth and sons Nick and Ben as well as Mick Grimes and Greg Adams are all above average footy tragics.  Mick, a renowned country footballer and coach, only barracks for whoever is on top of the ladder.  NSW Pete certainly knows a lot about Aussie Rules for someone who grew up in Central NSW and Helen chimes in whenever Carlton is mentioned and let’s face it they have given us a lot to talk about lately.  Vic Pete is a long suffering Richmond supporter and Leo is so quiet that I can’t tell you who he follows.  Anyway, enough about footy.

We arrived in Kokoda and paid a visit to that wonderful local store before heading up to the plateau and checking out the War Museum before lunch.  The weather was good but turned a bit nasty as we climbed the Deniki Hill.  The hill didn’t present much of a problem for any of the trekkers.  Helen Kiley was the only female on the trek and husband Leo was there too.   Leo and Victorian Pete are brothers.   They have seven brothers who couldn’t be on the trek with us but the boys dedicated their trek to the memory of their dad who served in the AIF in PNG, survived the war and raised lots of kids.   Helen’s determination and strength were evident from the very beginning.  She has a fantastic nature and when things get tough she giggles and she went on to giggle her was across the Kokoda Track.  Leo was the quiet achiever and got stronger and stronger as the trek went on.  On the first few days Leo was content to drop back a little from the main group and by day four or five the group couldn't have dropped him off if they tried.

We woke to nice views across the valley from Deniki but I was a little concerned we were still in for some rain and very muddy conditions.  Nick and Ben quickly earned the nicknames Kleenex and Sorbent because they spent most of their time in close proximity to the Lead Man’s (Neino) backside.  Both of these young fellas continually commented on how difficult the trek is yet they never slowed down for a single second.  It was actually pretty competitive between the two boys with older brother Nick using a few tricks to secure line honours on the first few days.  Ben fought back well and I think we'll call it a draw.

The weather held for our visit to Isurava and for our walk to Alola.  It had become apparent by this time that our cook Base has exceptional culinary skills.  Boy can he cook.  When we headed off to Eora Creek I was still concerned about what the weather was going to do and the mud that lay ahead.  It was on that morning, halfway up Templeton’s Hill that something occurred which would ensure good luck for the rest of the trek.  Seth spotted a rusted horse shoe on the ground.  While he couldn’t be bothered picking it up, Mick recognised the significance and snaffled it.  In the very same area our Lead Porter, Robert found a 303 round.  I don't think the track has seen many horses or ponies since the war.  Anyway, suffice to say that once armed with the horse shoe we had no more rain and a dry track. 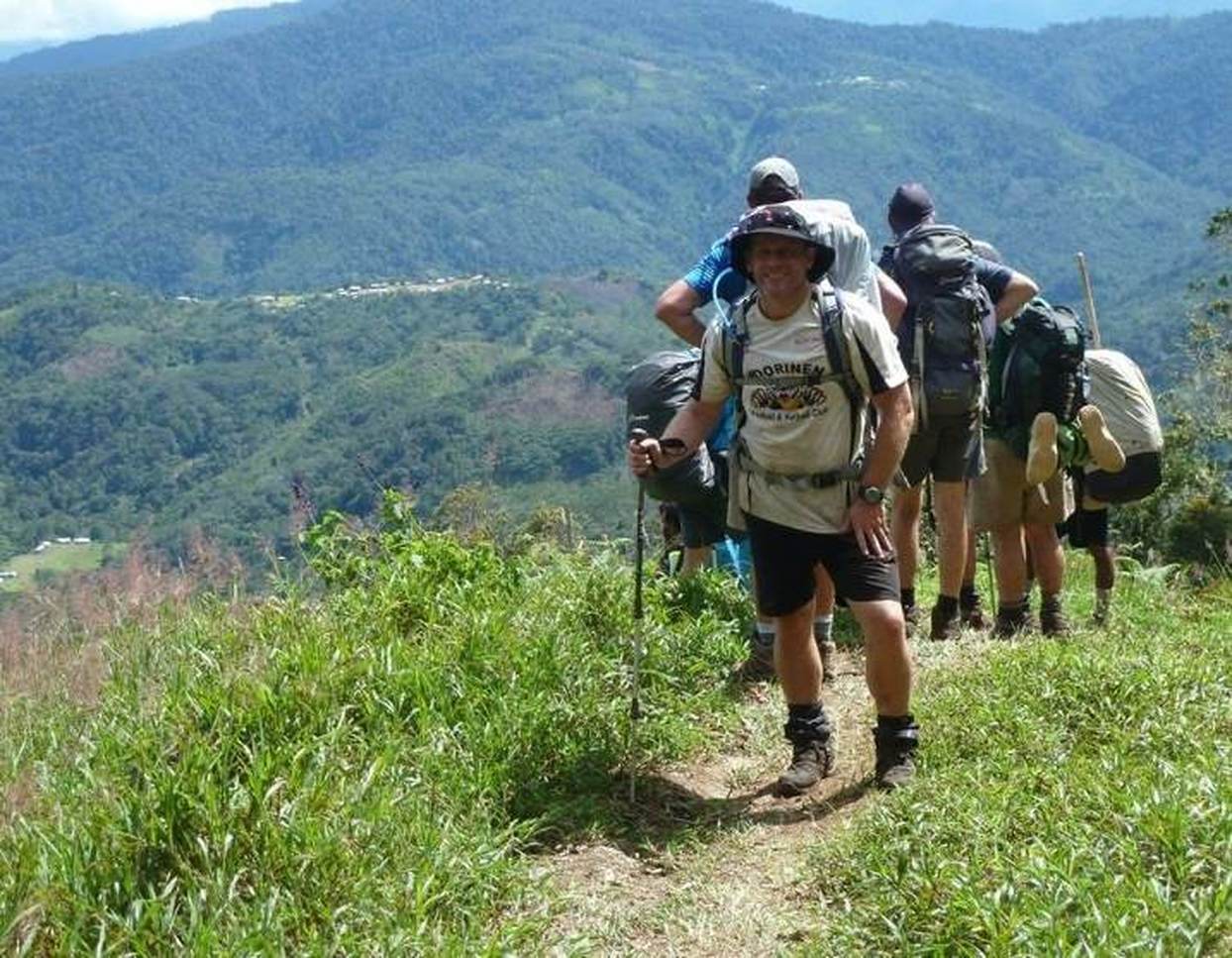 On the climb to Templeton’s Crossing I spent a bit of time walking with Greg Adams who is a School Principal in Northern Victoria.   All the while we could hear Helen giggling not too far behind us.  Greg was really taken with the cultural aspects of the track and keen to gather as much information as he could back to his students.  I always enjoy it when Trekkers show an interest in the locals so good on you Greg.   Everyone made it into Templeton’s Crossing at a very respectable hour and there was plenty of time for a dip in the icy cold water.   We had a late night at Templeton’s and stayed up until 7.30 pm.

The Horse Shoe weaved its magic again on Day 4 and we had fine weather for our walk to Kagi.  As we reached the Kokoda Gap we encountered our first group heading the other way.  They didn’t have a guide and weren’t even aware they had reached the Gap.   Our stay in Kagi was most enjoyable.  The trekkers had plenty of gifts for the local kids and the school.  Frank from the Kagi School was absolutely thrilled with the offerings.

Wouldn’t you know it, we had a beautiful day for the leg between Kagi and Menari.  That Horse Shoe had to be the reason.  By this time the banter between trekkers had reached fever pitch.  Particularly between Brenten and NSW Peter.  They are obviously great mates and both gave as good as they got but I gave the points to Brenten by a small margin.  He was just relentless and never stopped probing for an opportunity.  Pete on the other hand took time off to tell funny stories.  He’s so good at it and most of the falls that happened on the trek occurred when people were distracted by or laughing at one of his stories.  Most of the others weren’t bad at the banter either.  Mick has a very quick wit and dry sense of humour and Seth just laughs all the time.  It was a bit of a running joke that Seth is absolutely hopeless with directions, AND HE REALLY IS, but we’d never lose him because you could always here him laughing or talking.

Thankfully our Horse Shoe delivered a relatively dry swamp and we got into New Nauro nice and early.  However, the rivers and swamps weren’t friendly to Helen’s Boots which decided to fall apart.   It wouldn't have happened if she was carrying the horse shoe.  Far from perturbed, Helen just giggled and got on with things walking along with her boots flapping away like a pair of thongs.  This episode would have caused panic in most trekkers but not our Helen.  Leo didn’t seem to fazed either.   Of course it was Victorian Pete to the rescue.  His trademarks are calmness and helping others.   He certainly earned the best team player award hands down.   Pete spent hours repairing Helen’s boots using cable ties to secure the soles back to the uppers.   That worked for about half a day before he had to resort to using tape and spare shoe laces to tie them together.  And it worked a treat.   The boots made it all the way to the end (JUST!!!) and Solomon is now the proud owner of boots in pieces which he reckons he can fix.

It must be mentioned there was a hard fought card championship at New Nauro.   I’m struggling to remember the outcome but I think Seth and Baz were the undefeated champs.  It would be remiss not to mention Robert’s after dinner talks.   He was fantastic and I think we all enjoyed his efforts.  I'm sure that everyone would agree that the porters did a fantastic job for us.

Everyone was determined to arrive early at Owers' Corner on the final day. In fact we were ready to go nice and early and had to give the porters a bit of a hurry up which is highly unusual.  We did manage an early finish and celebratory drink.

Thanks Brenten, Pete, Pete, Leo, Helen, Greg, Mick, Seth, Nick and Ben.   I hope you really enjoyed our adventure, I know I did.  I enjoyed your company immensely and It was a real privilege trekking with you. I’m looking forward to catching up with you all again.