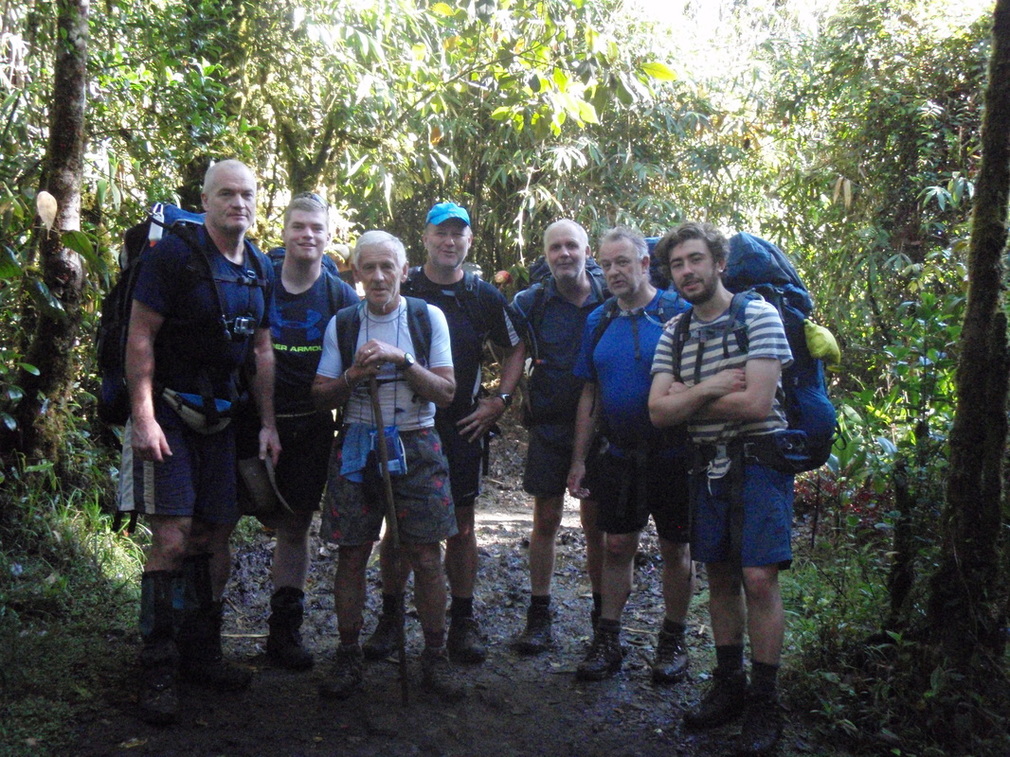 This trek, affectionately known as the “Freebairn Group” was just a small crew of 6 trekkers plus me and the porters.  This amazing group consisted of three father & son combinations.  In some ways I felt a bit like the fifth wheel or in this case the seventh wheel.  Actually, it isn’t very fair of me to say that because I was welcomed whole heartedly and unreservedly into the fold.  I’m always envious when a father & son get to walk the track together but it was a special privilege to be a part of this trek.

So, in the group we had Nigel and James, Bernie and Fraser and Chris and Luke, some of whom I have known for years and others I’d joined on a couple of walks prior to heading off to PNG.   I should have known better but fell into the trap of accommodating Bernie’s very sociable nature on our first night in Port Moresby.  We ended up having quite a late night and solving many problems of the world.  For those who think this seems like unprofessional behaviour, I promise not to do it again.  It set the tone for Bernie’s trek.  He is a machine and would never contemplate doing anything the easy way.  The harder it gets the better he likes it.  Young Fraser is a chip off the old block too.  Although he and the others were smart enough to stay away from us on the first night, he revelled in the hard work on the track and pushed our Lead Man, Gai to the limits.

Negotiating the small group through the chaos that is normally associated with Moresby Domestic Airport was a breeze and we had a very uneventful flight to Popendetta.  We were quickly on board the limo and after a brief stop in Popendetta it was off to Kokoda.  Nigel set a trend for the rest of the trek when he started us playing some general knowledge games during our truck ride.  It kicked off with a game of naming towns in Victoria starting with A and so on.   We had five very competent players if I do say so myself and two who struggled a bit.   Luke did have his moments of genius but on the whole he just invented towns that just don’t exist.  As for James, well his thing is to reorganise the Atlas.  For instance, when we got to the letter “C” he moved Coffs Harbour to Victoria.  Just one of many geographical changes he decided to make.

I couldn’t help but notice during the truck ride that there seemed to be flowing water over the road in places I’d never seen it before.  It turned out to be a bit of an indication of things to come. 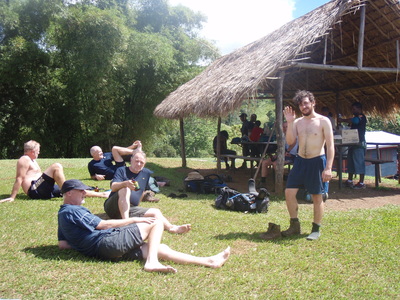 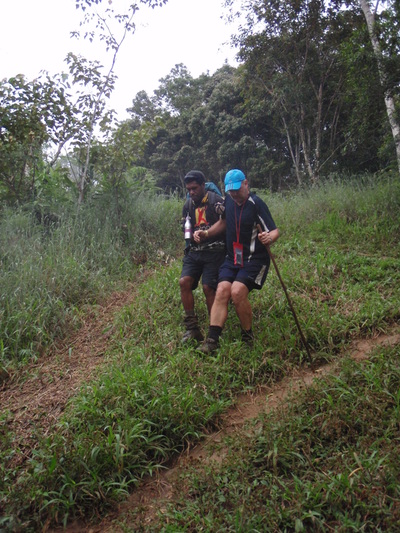 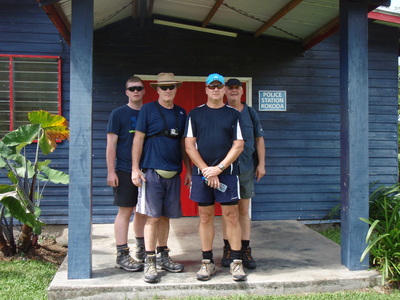 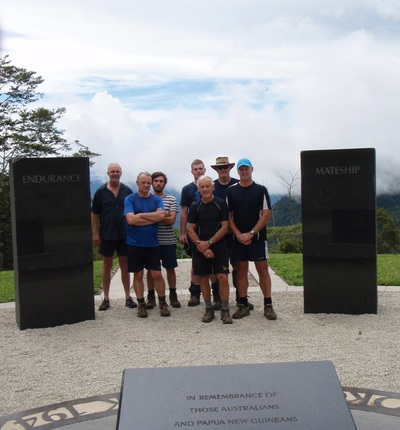 Despite that scary thought, Kokoda greeted us with nice hot conditions and a War Museum which was open for business.  As we approached Hoi we paused to remember Private Rex William Curran V58374 who was killed in action at that location on 9/8/1942.   While it was difficult to establish the exact location where Rex was killed, the available material suggests it is in a dip on the left of the track at the Hoi end of the Rubber Plantation.  It happens to be the spot where most Lead Porters stop for our first break.  Rex is a relative of James’ wife.

Everything went to schedule and we arrived at Deniki in time to set up camp for the evening.  I climbed the hill into Deniki with Chris while the others tore off into the sun set.   I’m sure at that point, (and a couple of other times along the way) Chris was questioning his decision to do the trek but as I said to him, he isn’t the first person to think that way on the Deniki Hill and he wont be the last. My observation was that he had a bloody big heavy pack but also the fitness to get through. Chris is very resilient and proud and wouldn’t hear of anyone taking weight from his pack. Of course the Deniki evening downpour arrived as usual.

I think everyone enjoyed our visit to the Isurava Battlefield.   Our cook, Paul Jo prepared an exceptional lunch and for one of the few times for the whole Trek, Lead Man Gai took the opportunity to have a little snooze and believe me, he needed it.  He’d worked out by then that Bernie and Fraser are supreme athletes who couldn’t be tamed.  By this time, Luke too had established himself as a front runner which made Chris immensely proud.   There was a few occasions where we in the main peloton held on just long enough to play another round of the town game before letting them scoot away.  Eventually we got sick of naming towns and moved onto to countries starting with “A”.

We were hoping to have a fish at Templeton’s Crossing One but conditions didn’t favour us.  Plus, our recently crowned Porter of the Year, Tuksy who was walking from Kagi to Kokoda to prepare for a trek got into Templeton’s and hour or so before us and caught our four fish. We’ll be having words when I next see him.

I hope James doesn’t mind me referring to his age but I have to.  He is in his early 70’s and boy is he an inspiration and a legend.  While name games may not be his thing, physical exertion certainly is.  I’ve trekked with several others around his age but none with the energy and stamina he has.  In fact he is way stronger and fitter than most people half his age.  I recall arriving into one campsite absolutely worn out only to see James doing a little warm down by jogging a couple laps of the camp.  I was both inspired and jealous.  His running style is always in perfect form too but I guess that is to be expected from a former professional runner.

Nigel had a little tumble and rolled his ankle as we descended into Kagi.  Fearing the worst I scrambled down after him and gave a good demonstration of why we shouldn’t scramble down after someone.  Anyway, we strapped up Nige’s ankle and he bravely battled on for the rest of the trek in obvious pain but without a whimper.  Until that happened I had the impression Nige was doing it easy and could have walked a lot closer to the front had he wanted.

Our stay in Kagi was very pleasant and it was nice to enjoy the Eco-Loo.   After a relaxing evening and probably our best rounds of the name game we headed off towards Menari.  Chris and I struggled to keep up with Nige despite his injury.   At the Main Creek Crossing I put on a display of how not to negotiate a log crossing.   I was perrillessly close to going into the water and wouldn’t be telling you about this except for the fact that Bernie caught the whole thing on his Go Pro and will take great pleasure in making sure a copy finds its way to No Roads.  Go Pro’s should be banned!!

Up until that point the track was very quiet but that all changed the following day when we arrived at Brigade Hill which was like Bourke Street.  There was two possibly three treks waiting there to greet us.  Fortunately they were all heading the in the opposite direction to us.   I think Chris will back me up in saying that from Brigade Hill onwards it was a case of mud, mud and more mud.  It was particularly wet for the last four days and the logs in the swamp we submerged but I think everyone acknowledges that is part of the real Kokoda experience.  The early arrival into New Nauro on day six was welcomed and provided opportunity for a bit of R&R and some Texa Hold Em.

We had an enjoyable last evening and arrived at Owers' Corner as a group at a very respectable time.  A real feature of this trek was the efforts everyone went to to use a bit of Pidgin English when talking to the porters.  I think I speak for everyone in saying the porters were just sensational.

Well, I hope I haven’t insulted anyone here.  What a great trek with a great bunch of blokes and just thinking about it makes me want to be back on the track.    Thanks Nigel, James, Bernie, Fraser, Chris and Luke.  I felt we had a seriously good time and it was a privilege trekking with you.