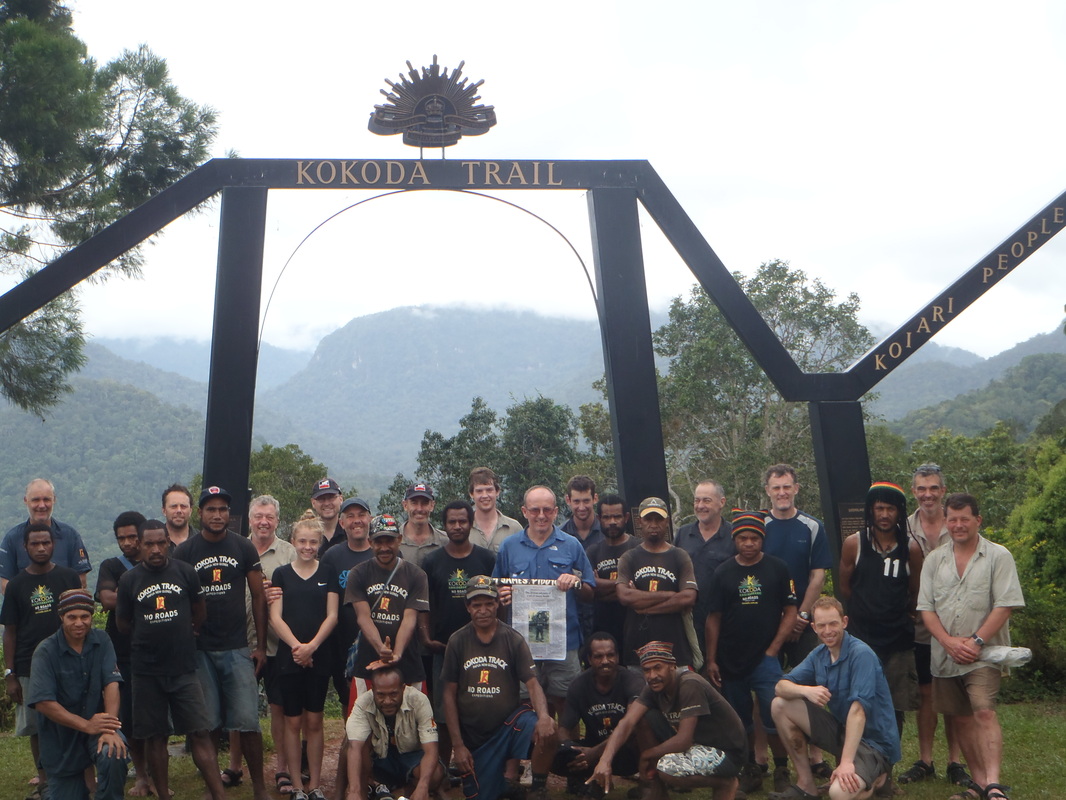 Now for Trek 2.  (2 – 11 Sept 2012)  A very interesting group of fourteen trekkers made up of Qantas Pilots, Tradesman, Business Owners, former AFL Umpires, insanely intelligent IT guys, a Teacher and our 13 year old marvel, Victoria, (Tors to us friends).

One of our Pilots, Mark was once in the army and had landed light planes at Efogi, Kagi and Menari.  John had once been in the RAAF and landed Helicopters throughout PNG.  It wasn’t long before they were wishing they were getting around in planes and helicopters rather than walking up and down these hills.

This trek got off to a more conventional start and we arrived in Popendetta nice and early.  In fact we were there before the shops had opened so we quickly re-fuelled the truck and headed to Kokoda.   One of the trekkers brought the biggest bag of tennis balls I’ve ever seen so there was a constant volley of balls flying from the truck towards kids along the road.   As an alternative to the Popendetta  Shops, we called into the Kokoda Trading Store which is a unique experience in its own right.  After visiting Kokoda Station and the Museum we had a quick lunch and made for Deniki.  Two things were immediately apparent.  The trek was going to be at a far more sensible pace and it was going to be wetter than the previous week.

It was a pretty quiet start with everyone focussed on getting the first hill behind us.  Then the gloves were off and the banter started.  There were some very funny people on the trek and some of the pilot stories were enough to make me want to catch a boat back to Melbourne.

At Deniki we all slept in tents, but at Alola, the battle lines were drawn between the Tent Tribe and the Hut Tribe.   I tried not to favour one tribe over the other but at the end of the day I am a hut guy through and through.   Eventually, Tors who started out as a Tenty, jumped ship and joined us in the huts.   Her copy-cat dad (Wheels) later joined us and try as we might, I don’t think he was ever entirely comfortable in our midst.

The track was quite busy and we passed three treks going the other way on Day 2.   I was also aware that two treks were just ahead of us.  Our visit to Isurava Battlefield was special.  It was very evident that many of the trekkers were deeply touched by its beauty and significance.  Morts read the poem “What do you say to a dying man” by Sapper Bert Beros.

Once again, we seemed to have the knack of getting into camp before the rain arrived. One thing we didn’t get on this trek was sunshine.  It just refused to come out.

We arrived at Templeton’s 2 to find another trek there for lunch.  This trek comprised two members of the KTA and three Australian Government Officials.   They were doing a five day shortened version from Kokoda to Naduri and moving at a very slow pace.  Despite leaving Templeton’s 2 a good half an hour behind them, we arrived at Templeton’s 1 and set up camp well before they arrived.  In fact we had taken up residence in the only serviceable hut at the campsite and I was astounded to discover the other group didn’t have tents.   You would have thought the well known Trekking Company they had put their trust in, would have been carrying tents.   Anyway, good old No Roads loaned them a couple of tents and everyone was happy.

As usual we visited Naduri and met Mr Ndiki, the Fuzzy Wuzzy Angel.   He was there but his sons Joel and Andy weren’t.   Thankfully, I have paid attention in the past and was able to give the trekkers a bit of his life story.   I hope I did him justice.  Jay’s recital of the Fuzzy Wuzzy poem saved the day.

The trekkers really seemed to enjoy our visit to Kagi and the opportunity to meet relatives of families of our porters.  We had an incredible amount of gifts for the children.  Tors had small bottles of nail polish for the girls however when the mums realised it was nail polish they trampled the kids aside and mobbed Tors.   It was hilarious.

We arrived at Brigade Hill on the day of the 70th Anniversary of the famous battle.   We had the place to ourselves and were able to spend a considerable time taking it all in. The local people had done a fantastic job cleaning up the area and making it even more beautiful than usual.   We spoke about the battle, had a minute of silence and Martin read a poem.   I’ve been there many times before but this visit was especially moving.

From there it was off to Menari but not before a swim in the magnificent river.   The sun still refused to shine but that didn’t worry us.   As expected, it was very wet after Menari and for the remainder of the trek.  We arrived at New Noaro around midday and after trudging through the swamp I think everyone was pleased to have an afternoon off.  We had a wonderful stay there and an even better time at U’ale Creek where we made good use of the swimming hole.    By this time the Hut Tribe had swelled to ten outnumbering a meagre five tent dwellers.

One the final day, the two tribes worked together to get us to Ower’s Corner just after midday.   It all went too quickly.

No Roads seems to attract all the best people.   We had I wonderful time and it was an absolute privilege to trek with this group.  Tors is the youngest person I have ever trekked with and she was and is an inspiration.