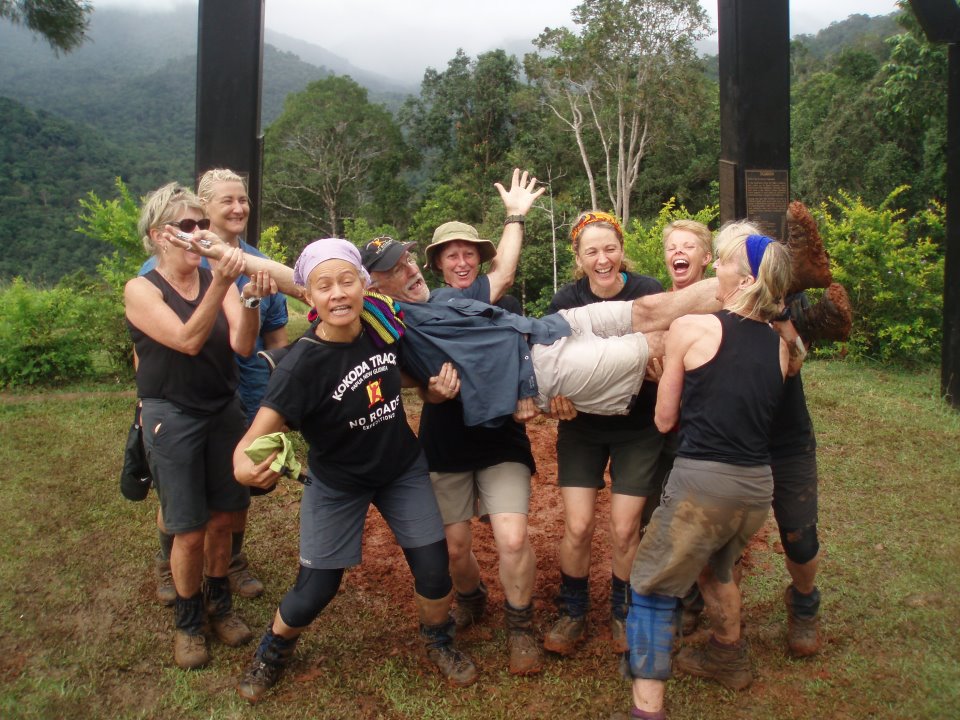 I’ve learnt from leading a good number of Kokoda Treks that every trek is different and that you can always expect new challenges and should never be complacent. I guess that’s why Kokoda Trek Guides keep going back for more - we love the challenge.

I recently completed my second trek for the season and was feeling fairly relaxed. The group of 8 females and 4 males were all connected to the Wantirna Genesis Gym and I had met with them on several occasions. The group was motivated, fit and ready for the adventure with ages ranging from 39 to 66 years. It was evident they were up to whatever the track could throw at them.

The Port Moresby leg of the trip was without drama until we arrived at the airport for our flight to Popondetta. Having arisen at around 4.30am we were ready for our 7am flight. It was then that the need for plan B, C and D came into play!!

The 7am flight was cancelled and became a 9am flight. Not a big problem, just a bit of a pain.

On our arrival at Popondetta International Airport we found that the toilets were open, however Duty Free was closed. Just bad luck! Our packs were unloaded .......the cargo area of the Dash 8 was emptied and something was missing, all our food and equipment!!!! A call to PoM ascertained that our supplies would be on the 1pm flight. Arrangements were made with Mary to have them collected and driven to Kokoda.  Some of our Porter Team would wait for them to arrive and then trek to Deniki where the group would stay the night. A good workable plan, so I thought.

After a short stop in lovely Popondetta, where I purchase our lunch requirements, we boarded the infamous Popondetta Chiropractic Express for the scenic and relaxing drive to Kokoda. The group was back on track, so to speak.

An hour into the journey the PMV blew a radiator. I knew we were in for a long delay when the radiator had been removed and lay in the mud beside the truck. After a call to Terrance and Mary a rescue vehicle was despatched from Pop.

The replacement vehicle arrived two hours later and we were mobile again. When the Local Guide Simon received a call I could tell from his reaction that the call wasn’t advising him that he had won a million kina in Lotto. The plane had arrived in Pop, however our food etc had been off loaded in PoM and as such wasn’t aboard..... I now had to go to plan C.

We arrived in Kokoda at 4.30pm, only four hours later than usual. No food, no tents, two fifths of bugger all!!!!! The plan was to spend the night there.

When you work with a team like the Kagi Boys any probem can be overcome. Food was bought from the Kokoda General store, plates etc borrowed from the guesthouse and the night spent there. At least we all had our personal packs and gear.

That night we all slept knowing that the next day could only improve.   The trekkers slept while I went through various scenarios to overcome a multitude of possible dramas.

After breakfast at Pricilla’s Guest House we started trekking to Isurava Memorial, which was to be our night stop. We left the General Porters at Kokoda - the plan being for our supplies to arrive at Pop at 8am on a flight with Barry Jenks’ group and being transported to Kokoda. Our General Porters would then accompany the supplies in the truck as it travelled further up the track to the Kovello School. The Porters would meet up with us at Isurava Memorial.

The good news is that this plan went like clockwork and my group was reunited at 6pm at the memorial and a great celebratory dinner was had by all.

What did my trekkers think about the events of the first two days? They simply laughed and said that they had come on an adventure and that was what they were getting!!!! Sometimes a trek guide can just be lucky!!!

And what about the rest of the trek.....well that’s another story. It was a blast!!!

I’m back on the track in September and looking forward to further challenges.