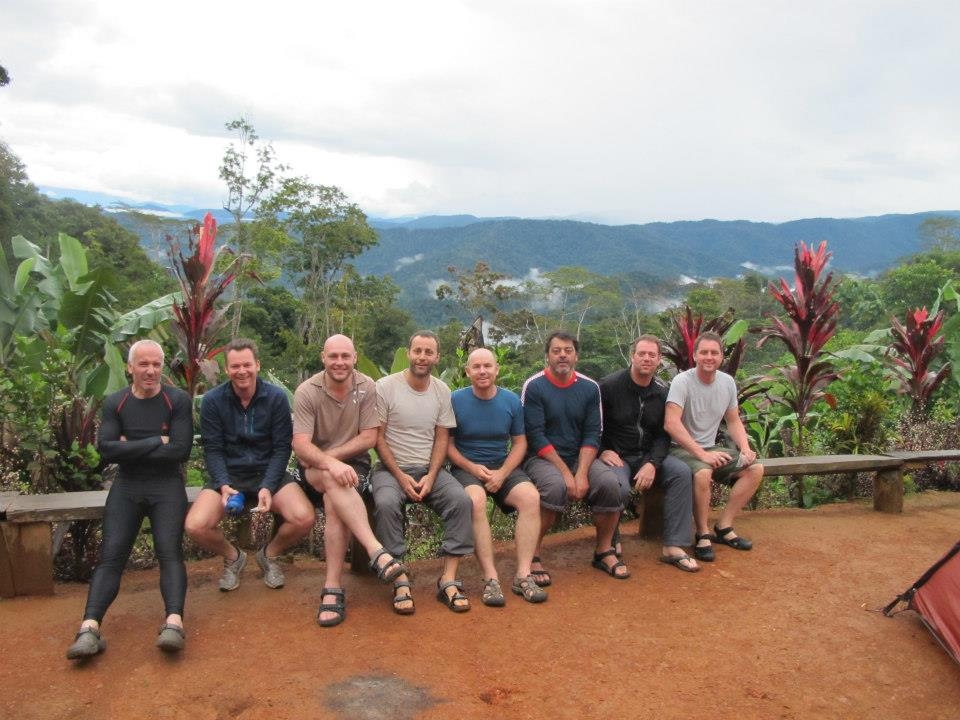 Hey gang, have just arrived back from my first ever back to back Kokoda Treks. I have to admit it was a bit of a battle for the old bloke so please smack me if you hear of me contemplating doing that again.  Nonetheless, great company and lots of fun made both treks extremely enjoyable.

Trek 1 (23 Aug – 1 Sept 2012)  We were due to start walking on the morning of 24 August but got the rare luxury of a sleep in when Airlines PNG decided they couldn't get us into Popendetta until after lunch. In fact it was 3.20 pm by the time we got to Popendetta. A brief visit to the local shops was enough for the old town to have lasting impact on the trekkers.  In all honesty, I have never seen the town look so clean.  From then on Popendetta was lovingly referred to throughout the trek and our group became known as the Popendetttttaaaaaaaa Crew.

We made it into a very dark Kokoda around 6.30 pm so I thought it wise to camp for the night and make up for lost time the next morning.  My trekkers were a bunch of eight long time mates.  Six had boarded together at Geelong Grammar and had graciously adopted two Melbourne Grammarians.  These blokes were like thoroughbreds ripened for the Spring Carnival and determined to set a few sectional records along the track.  It was almost too much for the poor old Aussie Guide but he managed to hang in there, barely!!!!!!

My plans for an early start evaporated and it was after 8.00 a.m. by the time we finished having a look at Kokoda Station and the Museum.  But it didn't matter.  Even with an extended visit to Isurava Battlefield my thoroughbreds covered the ground from Kokoda to Alola with plenty of daylight to spare.

Once again we tried our luck with the fishing rods at Templeton’s Crossing.  By this time the trekking pace was taking it’s toll on me so all I wanted to do was lay in the icy cold water of Eora Creek.  I have never enjoyed a plunge in the cold water so much. I left the fishing to porters John and Frank who netted five rainbow trout.

In the evenings the trekkers joked and sang of Popendetta.  My favourite was Little Red Popendetta contemporary collaboration of Peter Law and the artist formerly known as Prince.   Most importantly, we seemed to have the knack of getting into camp each night just ahead of the rain.   As usual, we had a fantastic evening in Kagi and were visited by many of our porter’s friends and relatives.   The trekkers commented that the Kagi visit was definitely a highlight of the trek.

We had an amazing experience in Menari.  We were expecting a supply drop and as we walked up the grass runway I could see the telltale sign that the plane hadn’t arrived.   Half of the village was sitting at the top of the runway, waiting in hope the plane would come.  I said to one of the locals, “Balus I stap lower?” To which a chorus replied., “Nogut”, meaning of course the plane and more importantly our supplies had not arrived.   We set up camp just as torrential rain arrived.  An hour later I had all but given up hope of the plane turning up and Local Guide Robert and I were engaged in discussions to buy some local produce.  The weather improved from torrential rain to a tropical down poor and at that moment the unmistakable sound of a small plane could be heard.   Any villagers who weren't at the airfield made a mad dash and our trekkers joined them.  I stood at the camp with Robert and watched the plane fly over and then circle twice.  We were convinced the plane couldn't possibly land in those conditions however no-one thought to tell the pilot that.   I was absolutely amazed when he lined up for landing and in he came.  It seemed he misread things slightly and landed too far up the runway causing spectators to scatter all over the place.  Anyway, he pulled up safely, unloaded half a dozen passengers and our supplies.   The trekkers had a chat with the pilot and it seems he was a regular “Yakka” man and quite unflustered by the whole experience.  Just another day in the life of a PNG Pilot.   He loaded ten passengers and off they went on the downhill runway somehow becoming airborne and managing to clear the very big mountain to the west of Menari.  It really was amazing to see.

The remainder of the trek was fast and relatively uneventful.  Well, not exactly uneventful, the jokes, wisecracks and banter never stopped.  I think I've mentioned before that Imita Ridge always scares me. Well I didn't have to worry this time because at the pace we were travelling it was over before I knew what was happening.    We continued to sing songs of Popendetta and laugh our way to Owers' Corner.  This really was a fun trek and a big final night in Moresby seemed inevitable.   A few of the boys sneaked off to bed early and as much as I would have liked to socialise, I had another trek in three days time so quietly said my goodbyes and headed off to bed.  Josh and Andy showed absolutely no respect for my welfare and rang my room and insisted I join them for pizza and alcohol.   In the end it was a late night.

Thanks Pete, Josh, Andy, Nev, Johno, Tom, Ryco, and Anthony.  I think we had a seriously good time and it was a privilege to trek with you.