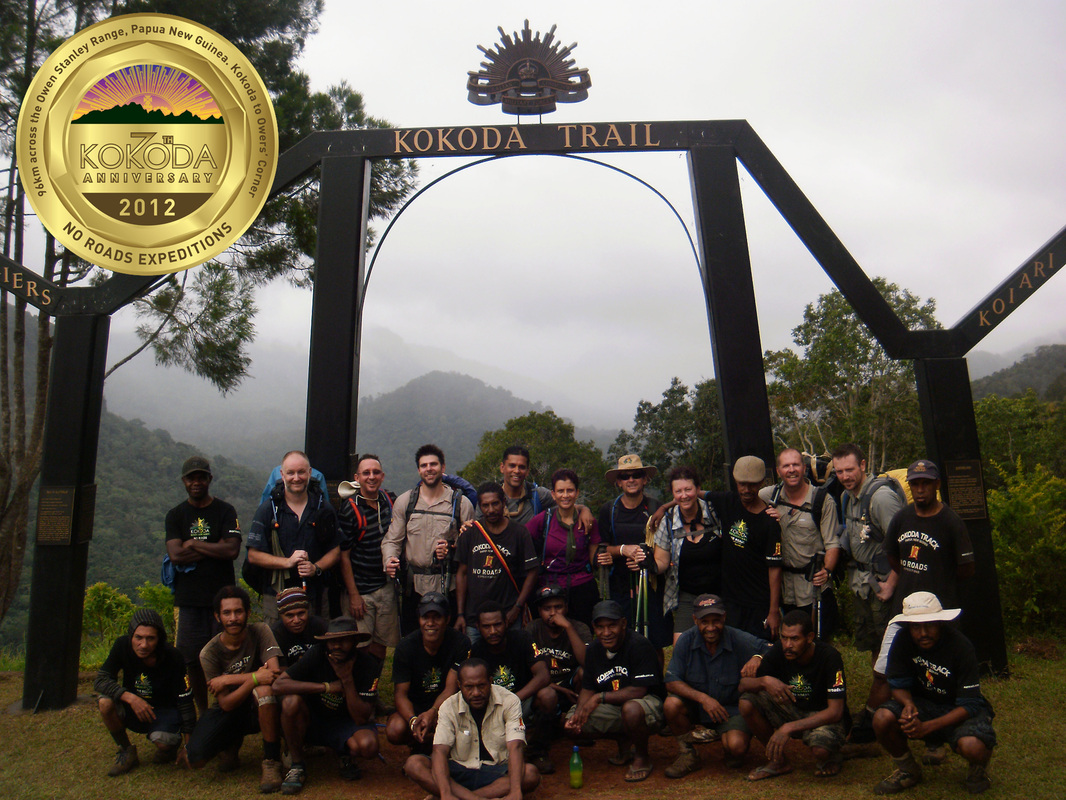 This year marks the 70th anniversary of the Kokoda Track battles during World War II. I was lucky enough to lead a small expedition with 9 trekkers and 17 porters along the famous 100km track from Kokoda to Owers' Corner in August. This short story captures just a small portion of the 10 day expedition.

After a short delay at the domestic terminal for our flight over to Popondetta, our expedition began with the 3 hour truck ride west to Kokoda, crossing the Kumusi River and passing through many locations where Australian and Papuan soldiers met the Japanese soldiers for the first time during the war.

Anyone who has trekked over the Owen Stanley Range will know that the hills can be torturous with false peak after peak and a simple 1km stretch can take hours. As per previous expeditions the first hill of note between Hoi and Deniki gave everyone a taste of what was to come, followed a day or so later with the section of the Track crossing from Eora Creek up and over to Templetons Crossing #2 and then again over to Templetons Crossing were tough.

We visited the site of the Japanese defensive position above Eora Creek which kept the Australians at bay with mountain guns and heavily dug in Japanese soldiers during the Australian advance. On the flatter ground around the Myola Lakes we investigated the B-25 bomber wreck and a large ammunition dump complete with rusting old mortars and hand grenades. The Myola Lakes impressed with their volcanic origins and spectacular vista.

This expedition gave the group a taste of what it might have been like during the war in terms of weather with several days of very heavy rain, rain that was heavy, constant and that creates rivers down the very tracks you are walking. On most days we had some rain or drizzle, the real Kokoda experience.

On the track between the Myola Lakes and Naduri, the downhill sections became very difficult with slippery steep slopes, puddles and a constant stream of water flowing downhill. This is where our wonderful porter team played an essential role assisting with a helping hand and guiding foot to ensure our destination of Naduri was reached safely.

We met an elderly Fuzzy Wuzzy Angle called Ovuru Ndiki at Naduri and listened to his stories, then trekked down into the valley below Kagi past the school and up into the village to the No Roads campsite, a welcome site with an Eco loo and the end of a long day, around 15.2km of walking.

Our group was unfortunately one less after a non-life threatening evacuation at Kagi which was a great shame, but as we heard the chopper leave the next morning and we headed down our first hill for the morning, we felt good that our friend would be back at Port Moresby soon.

Another long day was to follow heading to Menari with the villages of Efogi 2, Efogi 1 and significant locations such as Mission Ridge, Brigade Hill and the long climb down from Brigade Hill to the Vabuiagi River just below Menari testing us all. Our camp at Menari included the option to hire 10cm thick mattresses for 5 kina which was very nice. I don't think anyone really believed me but Day 6 was to be a shorter day with the potential to arrive at camp just after lunch.

The trek up and over the Menari Gap and down into the swamp went quickly with time to take a quick dip in the Brown River, a very relaxing time with the sun coming out for a few hours. With the swampy areas very dry our run through to lunch was quick followed by our last hill for the day up to Nauro. Arriving early was great giving us all time to relax, shower, clean up and simply talk for a while without the hassle of having to prep for the night.

Day seven was the second longest day with many km's and some tough hills including the trek down to Hoi and up and over Ioribaiwa Ridge, the location where the Japanese reached in their 1000's but halted, and in late September 1942 their "advance to the rear" began heading back along the Track.

We met an interesting man, a Polish fellow who camped at Nauro the night before with us. He was in the middle of cycling from Poland to New Zealand but had decided the Kokoda Track was too tough for his bike which was subsequently being flown to Port Moresby instead.

To reward ourselves for arriving at our last campsite for the expedition at Ua-Ule Creek following the 12 creek crossings, we all took a well earned dip in the creek in a natural rock pool. In good spirits but sad that the expedition was nearing the end, our thoughts turned to Imita Ridge, our last remaining ridge to cross on the last day before crossing the Goldie River and walking up to our goal, Owers' Corner and the famous archway memorial.

Each morning the team had been getting ready faster and faster with the best time reaching 20mins from alarm to ready for breakfast, packed and out of the tent. Not bad! The climb up and over Imita Ridge was nothing tricky, a steep hill yes but now everyone was on a mission, something about yummy hot food for lunch and the end of the never ending hills, sore shoulders and backs, driving us on.

A moving 45 minutes reflecting was spent at Bomanna Cemetery on our way home to the hotel in Port Moresby, followed by the traditional No Roads dinner with our Porters for the last time and a few beers to celebrate our achievements.

This was my fifth crossing of the Owen Stanley Range along the Kokoda Track, one I facilitated for a really great group of people and assisted once again by an excellent local team of dedicated porters. Special thanks to the Australian team from No Roads for assisting with the evacuation so efficiently and to Terrance in Port Moresby for his efforts in running operations during a very busy time.

Stay tuned for another post from Dirk who organised this trek. Until next time, "u-em-lavia" Kokoda! 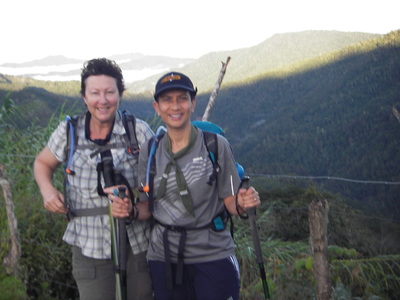 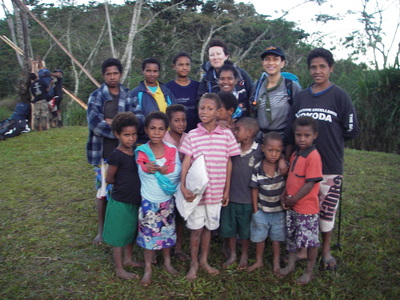 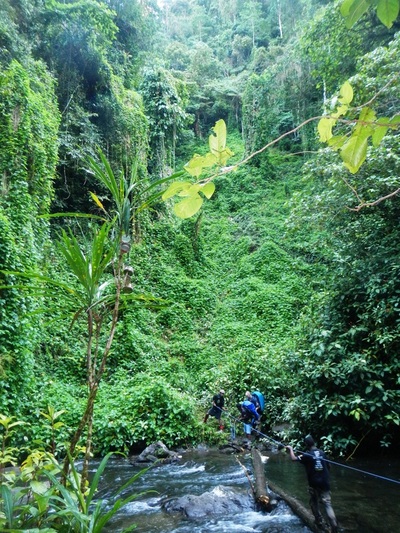 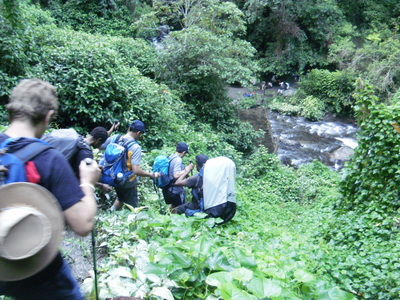 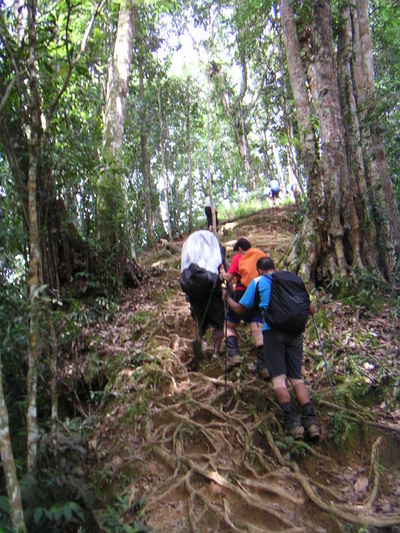 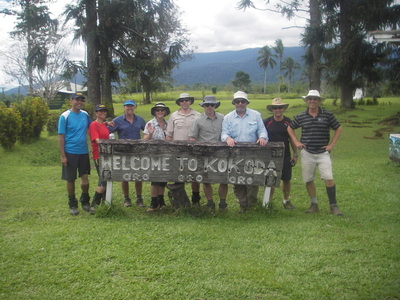