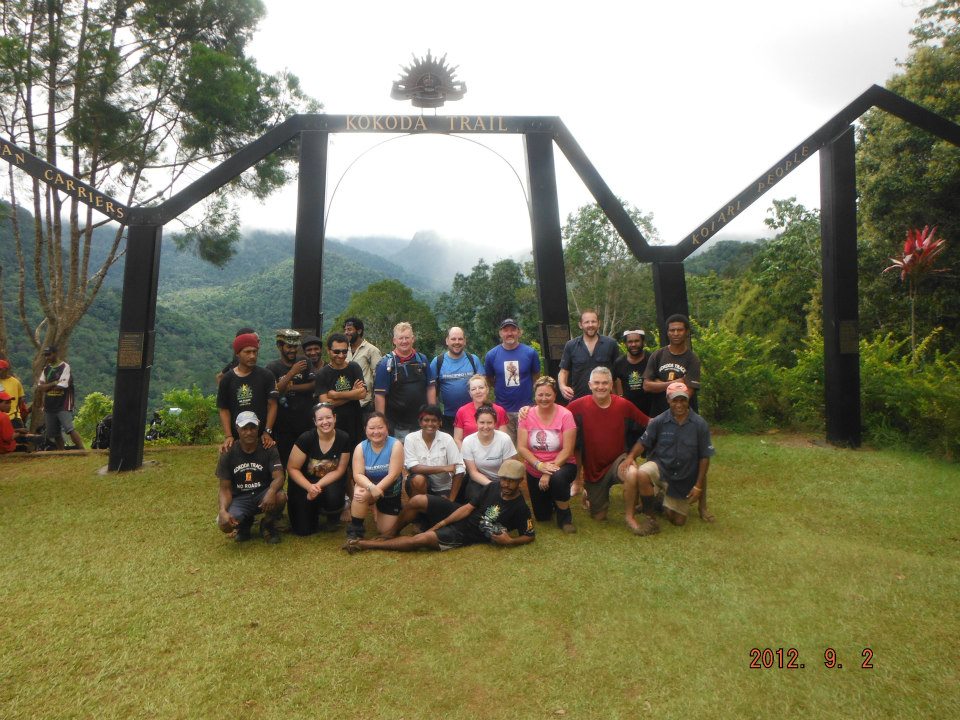 Well after a short four day return to Australian borders from taking a group on Josh’s behalf I was soon back in PNG to lead a spritely group of ten trekkers for my second trek of the season. The Holiday Inn was a buzz with No Roads groups and activity all in the pre and post trek craze!

All trekkers arrived a day earlier than normal in part of their  preparation and were met at Jacksons airport by myself and Norman Beer just an hour after my arrival.

We travelled to the Holiday Inn where the group were settled in a timely manner by the friendly staff. Mark and Julie Capper were the instigators of this particular group and were returning from trips in 2008 (Mark) and 2010 (Julie and Mark) to do the track with their close friends.

Whilst the clients hung out beside the pool I ventured out to the compound to conduct gear checks and collect empty hire packs. Pre trek briefings were conducted nice and early in the afternoon and room visits later to reassure that everyone had prepared their gear correctly.

4:30am breakfast is always a tough one but we all managed to eat before the flight and after the chiropractic express we’d made the plantation at Kokoda by midday. Bottled water and crisps from the supermarket occupied the trekkers through the bumpier half of the journey and everyone was chomping at the bit to get walking.

Heavy rain kept temperatures down for the acclimatizing but showed itself for some part of the day and /or night for six of the eight days. High numbers of trekkers and locals between Kokoda and Templetons crossings combined with the rain had churned up the track nicely and all rival Australian guides made passing comments in this regard.

Alola to Templetons 1 was a long day making camp just after 5pm so the option to Kagi via the Lookout was greatly accepted and we opted for an extra half an hour sleep and did Kagi between 6:30am and 3:00pm.

Sing sings with the locals and gift exchanges by the campfire at Kagi NRE camp site helped to restore the morale of the group and the day to Menari happened to be a dry but overcast one so we made great time there.

Julie was celebrating her 50th birthday on the coming Sunday so we made the decision to camp at Ofi/Good water so we could come off the track early on the Sunday morning to begin celebrations.

At 3pm atop the Maguli Ranges is when the heavens opened up and this made for a gruellingly slow descent to Ofi Creek where we were met at dusk (6pm) with extremely high river waters. This was hastily turned into an adventure for the porters and all trekkers were safely across the river via rope and sling by 8pm under the full moon. Shaken a bit at first due to the unexpected nature of it all; later all trekkers admitted that it had added that little bit more of an adventure to it all and were all happy to have a laugh about it.

Good Water was reached by 5pm on the final full day and on the next morning the porters and all trekkers sang to Julie for a 50th fit for a queen and complete with damper cake prepared through the night.

We were all off the track by 10am and I’d managed to contact Terrance to arrange a bottle of bubbles to celebrate in style at the top before the humbling barefoot stroll through Bomana cemetery to put it all back into context.

Final buffet dinner was a beef/pork roast and all clients and porters had a wonderful feed and their full of SP lager across the room from two other groups leaving in the respective two days.

A great trek all round. 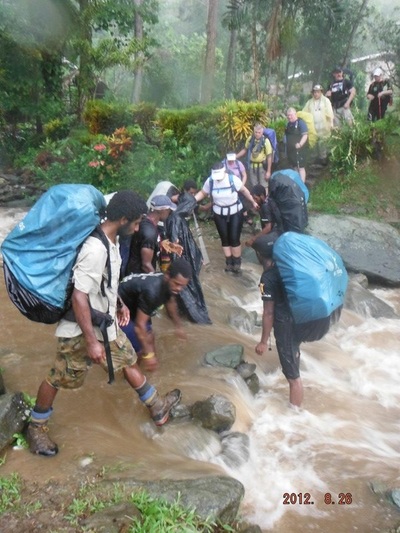 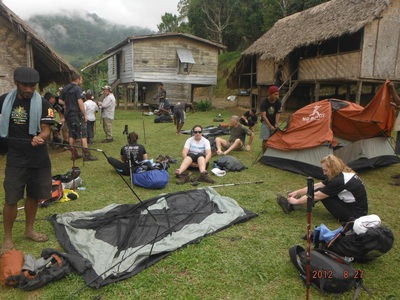 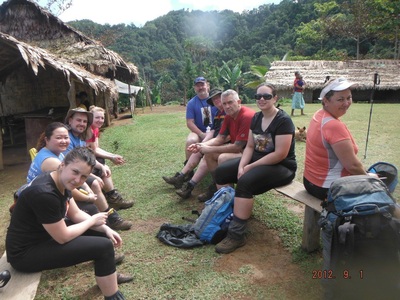 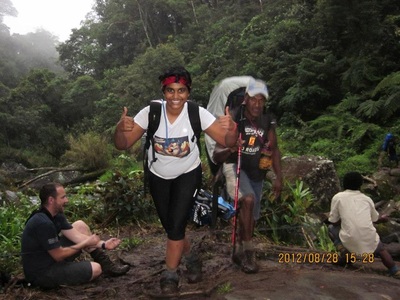