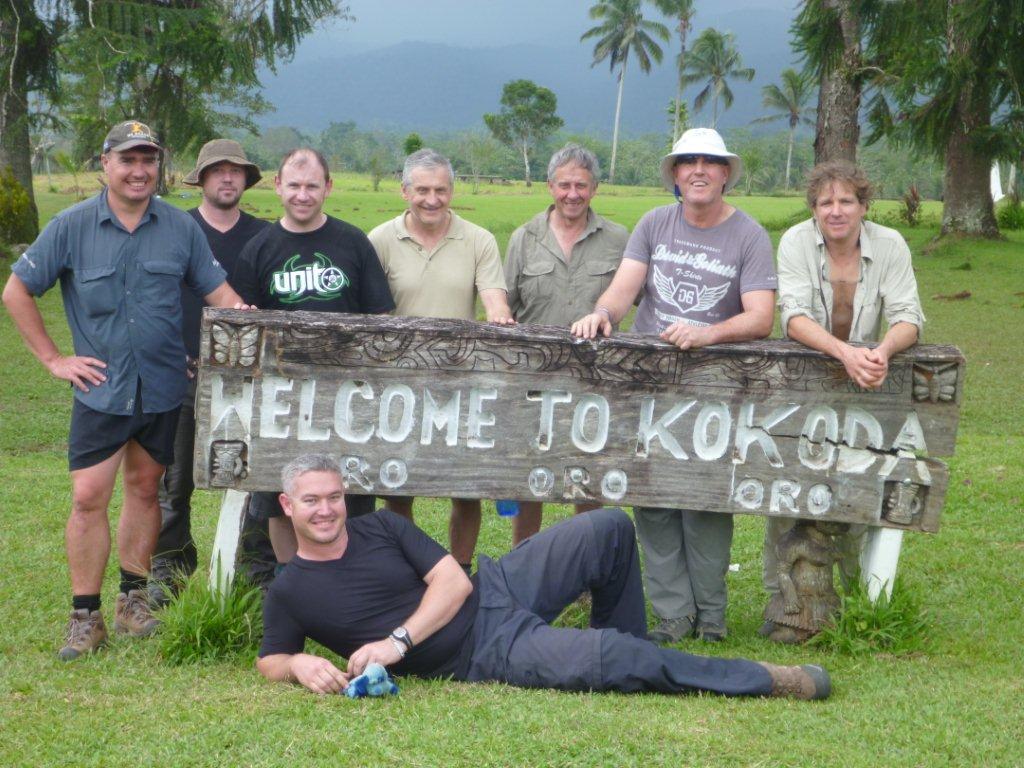 In late August 2012 I was a very privileged Australian. I was able to lead a group of No Roads trekkers across Kokoda at a time that coincided with the Battle of Isurava.

I must admit after being elated at being offered the opportunity to guide the trek, I found a bitter taste in my mouth when prior to departure from Australia all my research indicated that there would be no Government or Australian military representation at Isurava over the anniversary period. I was told when I rang various areas of officialdom that “trekking companies” would be organising “something”.

I soon came to the realisation that that meant me and any other guides and their trekkers whom happened to be in location would be those making our soldiers proud. I was a little bit disappointed; however, in the same breath, a little bit excited that I was possibly being presented with a brilliant opportunity to make it a very special occasion.

The group consisted of seven trekkers and I as the guide, Clement was our Local Guide and Lester was the Lead Guide. There were the “breaker brothers” (Ash and Warwick), Ray and Jason (father and son), and three great mates; Sean and Gerard Scully (cousins) and great friend and footy legend Anthony West. I had previously trekked with Ray in 2011, and I had met Ash on Guadalcanal a few months prior.

The weather reports prior to departure were forecasting a very wet track for the first half and then a solid improvement and a dry track on the south side of Mt Bellamy. What we ended up with was something like an eighties band – Wet Wet Wet!

It rained and rained every day and every night and then rained some more.  It poured all day at Isurava – and all night. It poured all the way up the Kagi hill at a rate that reminded me of 2 am during Cyclone Yasi in Townsville. Nature then provided us a torrential rain storm for the afternoon on Brigade Hill and the entirety of our walk down Brigade Hill to Menari.

When we arrived at Mt Bellamy we felt that advertised dry track under our feet for a few hours; however, after a few hours the rain decided to soak that side of the range as well, this ensuring our trek was pretty much a complete trek of rain filled fun. One of the highlights in regards to rain was on the second last day and it was seeing the track from the top of Imita turn into a 10cm deep river flowing down the northern side towards Kokoda…. The steepness of the final accent ensured as that as I pushed to the ridge top I was pretty much taking mouthfuls of the brown watershed as I slipped crawled and made best effort to ascend Imita. Certainly an experience that is for sure!

Over the period of the trek we in some ways became a little like walking wounded at differing times we all had an injury or illness to content with! Injuries included:


Weather, injury, and illness would not interfere with what we were here to achieve as that was all part and parcel of what is Kokoda. We were there to honour those whom had fought for freedom in the location and recognise the significance of the date and locations, so:

The defensive action by Australian forces at Isurava occurred between 26 Aug and 30 Aug 1942. My trek group arrived at Isurava at midday on the 26th August in the middle of a rain storm (by this stage we had already visited the KI 51 spotter plane above Isurava). We were all very keen on spending the night at Isurava in order to pay our respects in the form of a Dawn Service.

On our arrival I noted that Isurava was alive with laughter and there were people everywhere. They were not Australian trekkers as I had assumed would be everywhere but PNG locals from villages in the immediate vicinity of Isurava. They were celebrating the Anniversary (apparently the Australian Government had given them significant funds to celebrate in a manner they saw fit). There were volley ball games going on, there were feasts and celebrations underway (even in the rain). Children were laughing and smiling, and they were all covered in mud and they were enjoying many natural slip and slides on the lush grass.

It wasn’t long before the significance of this day at Isurava made just a little bit of sense.

I had been disappointed that there were no formal activities being undertaken as previously mentioned. Now as I sat for lunch with the trek group I commented that this atmosphere was not the normal Isurava. Isurava is normally a solemn quiet place; however, today it was noisy and full of people. Much like it was 70 years ago to the day! However, today it was frivolity, fun, and the laughter of the rightful owners of the land. It was not banzai shrieks and rifle blasts of warfare undertaken by visitors from foreign lands as it was back then. As I watched the children play, I smiled contently and understood that this is how it should be.

On the day of the 26th Aug (the commencement of Isurava) there were two other trek groups whom visited Isurava - neither group allowed to stay at the memorial site overnight. Our group due to some brilliant liaison by Clement my local guide were able to stay and for that we were very appreciative.

At approximately the same time in history (70 years on) that the AIF arrived at Isurava to relieve the 39th Battalion (at 5pm) we conducted history lessons.

We then had an after dark poem reading session and a period of quiet time as we sat on the steps above the pillars of the monument. The monument looked astounding lit by candles (3 candles in front of each pillar). It was a significant time and a significant moment for us all.

On the morning of the 27th August 1942 there was a lull in the battle at Isurava morning came and the guns were silent. Seventy years later the silence was back as the dawn broke. The children whom played yesterday were sleeping; we eight Australians were alone, awaiting the dawn, paying our respects as best we could.

Our Anzac Day style service was something I will never forget and as a serving soldier I felt very proud to be the master of ceremonies on such a day at such a place. As the first rays of light streaked the sky and the words “Lest We Forget” were still close at mind we heard the call “packs on” and day three began, it was time to move on --- Dump Number One was our Goal.

The trek continued with rain and injuries mixed with laughter and history. Mateship past and present formed and strengthened along the Kokoda Track. Yes there were trials and tribulations, injuries and inclement weather, yes there were smiles and there were tears; however, to be there then at that time, at that place:

“We wouldn’t give that up for quids” 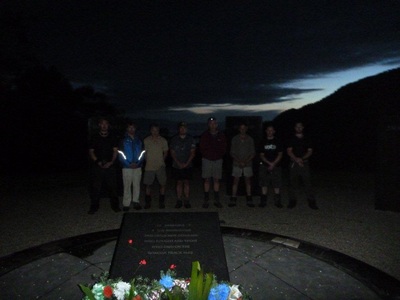 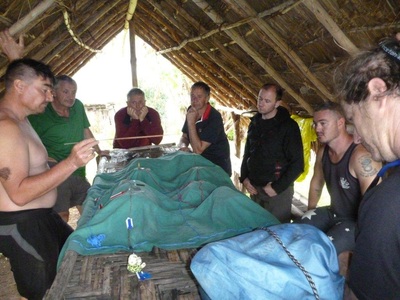 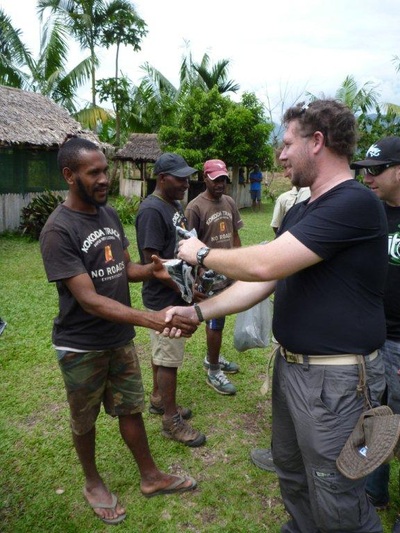 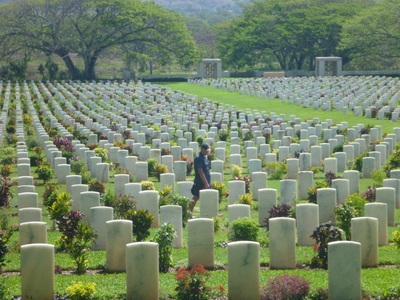 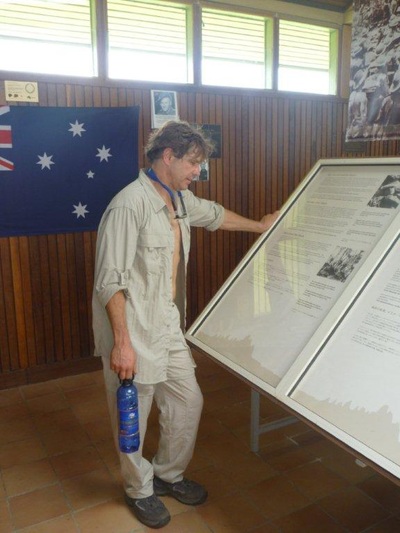